The highly contagious Coronavirus is now reaching a pandemic level, where almost the entire globe is under its attack.

As per reports over 94,000 cases of coronavirus have been reported till yet and over 3,000 deaths have occurred due to it. But there is a silver lining to this as more than 50,000 of the reported people have recovered from the illness. Hopefully, a cure will soon be found for it and all people can make a swift recovery.

The COVID-19 seems to be coming from a more novel coronavirus (nCoV) that had never been identified in humans. This broke out in the Wuhan region of China in late December 2019 when many people reported of suffering from pneumonia due to unknown causes.

This quickly spread all across China with the country having the majority of confirmed cases, almost 80,000. It then slowly started to spread to other regions too and the WHO (World Health Organisation) declared it as a Public Health Emergency of International Concern on 30 January.

Till yet India had not really reported any confirmed cases to the disease, that changed though recently with the country already having over 28 confirmed cases of people getting the coronavirus. 16 of the confirmed cases are from an Italian group of tourists and their Indian driver who were travelling in Jaipur.

As big as the disease is, it seems like some people had already predicted a pandemic of this level to break out sooner than later. Here are a few predictions that were made that pointed at an impending plague like illness, possibly suggesting this Coronavirus itself.

A 2008 book called “End of Days: Predictions And Prophecies About The End Of The World” co-written by Sylvia Browne was published. This book talked about how, “In around 2020 a severe pneumonia-like illness will spread throughout the globe, attacking the lungs and the bronchial tubes and resisting all known treatments.” 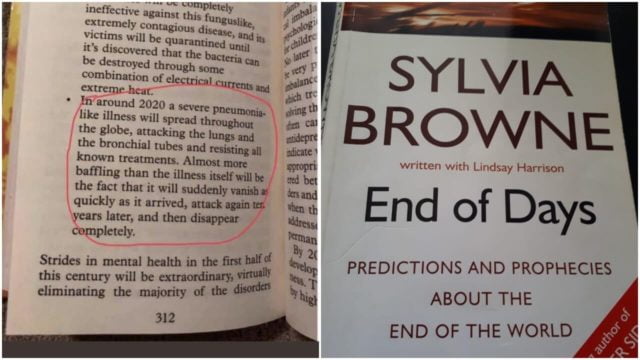 Animated show, The Simpsons, has often been correct in predicting future events with a scary accuracy. They predicted the presidency of Donald Trump, faulty voting machines, Higgs Boson, Apple Watch, and more. But it seems they could have touched upon a possible prediction of the Coronavirus too.

In a 1993 episode titled, “Marge in Chains,” the people of Springfield (the fictional town the characters are set in) have to deal with a virus outbreak after a factory employee coughs into a box.

Although the disease was called “Osaka Flu,” and said to originate from Japan and not China, but people seem to be commenting on how the symptoms look quite similar to the coronavirus.

Read More: Everything You Need To Know About Coronavirus: Are We At Risk & How To Avert It

Another book this time from 1981 has been said to have predicted or at least talked about a disease that is similar to the coronavirus.

“The Eyes of Darkness” a book by Dean Kootz, an American author talked about a virus called the “Wuhan-400”. 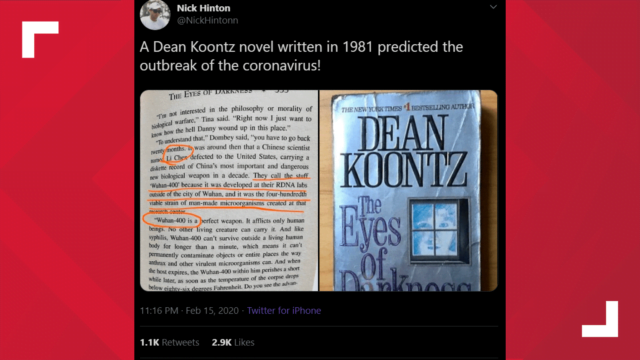 The text that is seeming to have predicted this disease reads like: “They call the stuff ‘Wuhan-400’ because it was developed in their RDNA labs outside of the city of Wuhan, and it was the four-hundredth viable strain of man-made microorganisms created at that research center”.

However, it seems that this theory has been debunked since there are not a lot other similarities besides the name of the virus itself, sharing with the city where coronavirus is said to have originated from.

#4. AI Informed Of Outbreak Ahead Of Time

Bluedot, a startup based in Toronto, Canada had actually informed its clients of the outbreak on December 31st, 2019, which was much ahead of WHO and US Centers for Disease Control and Prevention.

Bluedot’s said that their AI-driven health monitoring platform “uses big data analytics to track and anticipate the spread of the world’s most dangerous infectious diseases.”

The company also informed WHO about their findings after which the first official virus alert was sent out. They found some evidence of the virus pandemic around three weeks before the Chinese government even put restrictions on air travel.

Isaac Bogoch, a BlueDot consultant, physician and clinical investigator at the University of Toronto had even co-authored a paper much before the virus popped up outside of China, where he said that the disease might go next to Japan or Thailand.

Just a few days later on 17th January 2020, the National Center for Immunization and Respiratory Diseases at the Centers for Disease Control and Prevention announced that “Three cases outside of China have been identified, two in Thailand one in Japan, all travelers from Wuhan,” proving Bogoch’s theory right.

One has to wonder if anyone had given attention to them, then perhaps something like the coronavirus could have been stopped from reaching such a severe stage.