It is a very tense situation for India and Pakistan, since almost 14th February, when it all started.

The Pulwama attacks that killed about 40 of our CRPF personnel, started the domino effect of Indian army finally carrying out an attack on the terrorist group responsible on 26th February.

Jaish-e-Mohammed, the group behind the Pulwama attacks were attacked by the Indian Air Force (IAF) on Tuesday after they not only claimed committing the attacks but also threatened more such attacks in other states of India.

This then led to one of the biggest event which was the capture of IAF Wing Commander Abhinandan Varthaman by the Pakistani army.

Apparently, his jet was shot down by Pakistani air force on Wednesday when it was found to be in the airspace of the other country and after the JeM attacks.

So you can imagine the kind of stress the entire country has been under, praying for the safe return of the pilot as well as worrying for their own safety.

Thus, it is no time to be making jokes of any kind and this is why comedian Trevor Noah’s dig at the current situation between India and Pakistan is  extremely insensitive and frankly bad comedy.

On 28th February, the Daily Show With Trevor Noah YouTube channel uploaded a segment of the show that included Noah commenting on the recent situation in both the countries.

The bit about India and Pakistan starts at the 2 minute mark in the video.

However, it was the route he took that really bothered me a lot, first by comparing India and Pakistan with Cardi B and Nicki Minaj (American rappers) and then by joking of how an India-Pak war would go.

And I will admit, the Cardi B and Minaj analogy was not bad, I will always take a good joke on the long-standing enmity between the two countries. There is nothing wrong with that. 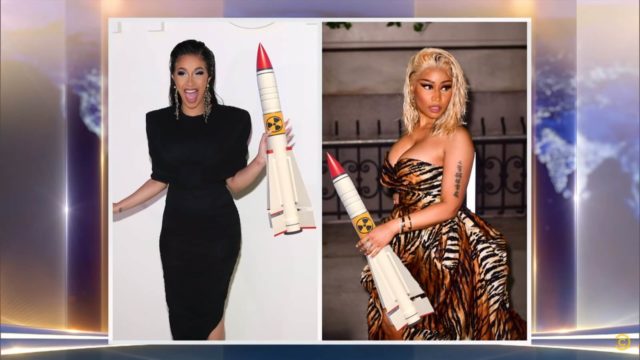 But there is a time and place for everything, and it was the following comments of how a war would go that really irked me, considering the situation I’m seeing in my country.

“I hope India and Pakistan don’t go to war. But if they did go to war it would probably be the most entertaining war of all time.”

Oh, so now a full fledged war is a source of entertainment now? Millions of people at risk, livings being sacrificed, countries almost finishing, is entertainment?

He explained why it would be so entertaining, because… Bollywood? Really?

“Because the Indian soldiers would run out on the battlefield and they’d be like ‘time for you to dieayaaayyyyyyayayyyy. (in a sing song manner)“

As if stereotyping Bollywood was not already rampant in Hollywood, now even a war is being included in that.

Because of course we do not do anything besides wear gold/yellow and do crazy dances and sing songs around trees, right?

Trevor then followed it up with this gold comment,

“It would also be the longest war of all time, another dance number?“

I am all for taking a joke, even if it’s on my country, religion and so on, but there is a line to be careful of when doing comedy, according to me.

I’m sure if they did the research on how India and Pakistan’s situation is like now, they must also know the tension and fraught environment that us civilians are living in.

As per my understanding, this is not comedy, this was not funny and frankly just lazy writing.

Using Indian Bollywood stereotypes and calling a ‘war’ as entertaining? Is that really all they could come up with?

Not only was it not funny, but it’s bordering on being racist and stereotyping the Indian army.

War is not a movie or standup comedy routine, that is meant for the laughter and entertainment of people. For us living in India it’s a fear that we don’t want to be true.

We understand the implications of war, considering both the countries have nuclear weapons, and how it could set us back a lot in development. 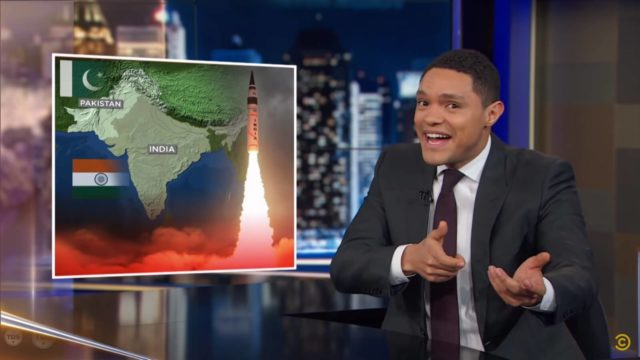 Read More: Trevor Noah Mocks India’s Statue Of Unity: Is It A Good Thing Or Bad?

Apparently, I wasn’t the only one who thought so and many other people are also not liking the jokes made on this whole situation.

I’ve really always liked ur humour @Trevornoah. Really have. And we In India have a good sense of humour. This still crosses a line. We’ve lost our forces to terror attacks. Somehow it doesn’t sound as funny. #JustSaying #TheDailyShow pic.twitter.com/qknBmi6qfd

Racist. Stereotypical. And downright offensive. It is true indeed, these days the moment you think someone is cool and wise, they do a @Trevornoah on you and flush down the entire goodwill! https://t.co/TJoxGrFd1c

i dont fucking understand how ANYONE can find this funny,, he said it would be "entertaining"??? war is not funny? the entire world has to mourn for the loss of an american life but it's funny when it's for brown people?? what the fuck pic.twitter.com/gJ9BMdjTFK

How tremendously disappointing, @Trevornoah. War is NOT a form of entertainment. You spend 80% of your time criticizing Trump and the violence he could be stirring, but the possibility of India and Pakistan engaging in actual war is a filmy song and dance to you? https://t.co/dlR0gdvHQU

For someone who claims to be the most woke person this is high key offensive, insensitive and straight up racist/ feeding on endless stereotypes. Disgusted by #trevornoah who thinks war is a form of entertainment when the repercussions negatively affect millions of people. https://t.co/7M6IMmLYw1

Insensitivity can't be passed off as dark #humour. @Trevornoah this is in bad taste. War isn't funny, and no amount of smart writing can justify this. #TrevorNoah https://t.co/lZkjkfrCYA

While I understand the concept of the show is to take a satirical and humorous look at world news, this was just a step too far towards being incredibly insensitive and rude.