According to the recent cryptocurrency market trends, Shiba Inu is one of the best performing cryptocurrencies as it has added more than 28 per cent to its value. The meme coin is assumed to be once again in the top ten list.

The Shiba Inu Coin was created in August 2020 by an anonymous Indian named Ryoshi.

It is an altcoin of Dogecoin, which itself is an altcoin of Bitcoin. It has been named after the Japanese Dog breed, Shiba Inu. The coin didn’t take much time to establish its popularity among major crypto exchanges through its following crowds, memes, persistence and a cute dog.

A cryptocurrency that was created as a joke in 2013, now appears to have been made in the vein of Dogecoin, and also has a Shiba Inu theme. Dogecoin is used for payments by some sports teams, AMC theatres, and so has become a popular token.

Definition Of The Shiba Inu Coin

Shiba Inu Coin is an experimental decentralized, community-building cryptocurrency that has been developed within the Shiba Inu Ecosystem.

They built it on top of the Ethereum Blockchain Network. It is a meme coin launched as a rival of Dogecoin or “Doge-Killer”.

Why Did The Coin Rise To Popularity So Soon?

The first being, the founder of Tesla – Elon Musk once tweeted that he would like to be the proud owner of a Shiba pup that hyped the cryptocurrency market, which led its prices to rise by 300%.

The second being, when its prices fell upto 40% owing to the founder of Ethereum Blockchain Network, Vitalik Buterin, who donated 50 Trillion Shiba Inu Coins to the Indian Covid Relief Fund which was owned by an Indian crypto entrepreneur Sandeep Naiwal.

Why Is The Shiba Inu Coin Rising Again?

A few days back, the coin experienced a massive dip as a result of which a whale moved more than $2.3 billion worth of Shib tokens, and in a massive sell-off of the coin, observed a decline in its trading price. 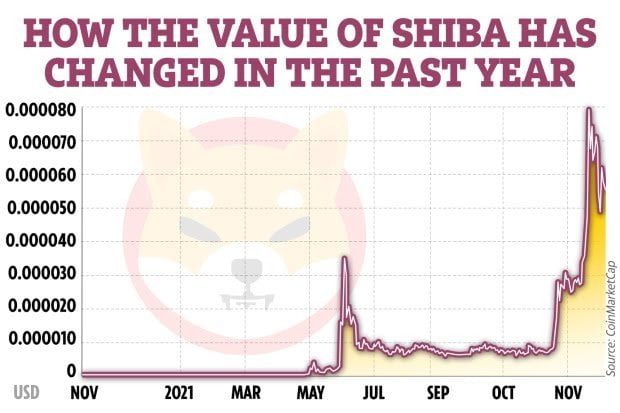 However, over the next few hours, if the coin can retain its momentum, it could top the $0.0000065 resistance. More buyers are coming into the market than sellers which is an indication of the fact that Shib’s Relative Strength Index (RSI) is heading into the overbought territory.

Shiba could rally higher and make a move towards the $0.000070 mark by surpassing the $0.000065 resistance level. Following this, Shiba Inu would become the tenth-largest cryptocurrency by market capital, surpassing USDC.

USD Coin (USDC) is a digital stablecoin that is pegged to the United States dollar and runs on the Ethereum, Stellar, Algorand, Solana, Tron and Hedera Hashgraph system.

What The Future Entails For The Shiba Inu Coin

Though it is only known as a meme coin, its increasing popularity and people’s interest in participating in it is pointing towards a different but potentially strong future.

It’s difficult to predict how Shiba Inu’s price will change in the future due to a wide number of factors affecting it. This includes regulatory crackdowns around the world, comments by high profile individuals such as Musk and other developments.

In May, the value of Shiba Inu soared after Binance announced that it would list the coins on the crypto platform.

Its value also rose in September, after it began trading on Coinbase.

Although there isn’t much movement among this token and its value, active buyers could help its value rise. It means the price could rise once again if it’s successful in listing on other recognized platforms such as eToro.

Although it may not appear to be a significant amount, due to its popularity, in the future, it can have a significant influence over large investors in the crypto market.

The Shiba Inu Coin has been in the limelight for some reason or the other, though its value is not very high right now. But it is taking over a lot of the crypto market and proving itself an excellent choice for investors.