The Kerala floods are seeing no stop to them with the numbers only rising each day and the city drowning.

With Operation Madad in full swing, thousands are being rescued from over the city with even ISRO satellites coming in to help the people stranded.

As per reports, more than 350 people seem to have lost their lives in one of the worst floods to hit Kerala in about 100 years.

The State’s information officer on Sunday was quoted saying that, “Since 29 May, when the monsoon starts in Kerala, a total of 357 people have lost their lives until now.”

With the incessant rains going on for almost 11 days now and the situation only getting worse, people across the country are being called out to send help any way that they can.

Sending donations of food, clothes, shoes, medicines, or money, people are not only making their own fund groups to dispatch help to people of Kerala but also donating generously to the Kerala CM’s Relief Fund.

Kerala is facing its worst flood in 100 years. 80 dams opened, 324 lives lost and 223139 people are in about 1500+ relief camps. Your help can rebuild the lives of the affected. Donate to https://t.co/FjYFEdOsyl #StandWithKerala.

In this time, celebrities and known people are sharing their story of sending donations for the people of Kerala, urging to help, and setting an example.

The Paytm founder Vijay Shekhar Sharma too joined into this by tweeting how he donated Rs. 10,000 to the Kerala Relief Fund and asked others to open their own Paytm account to donate. 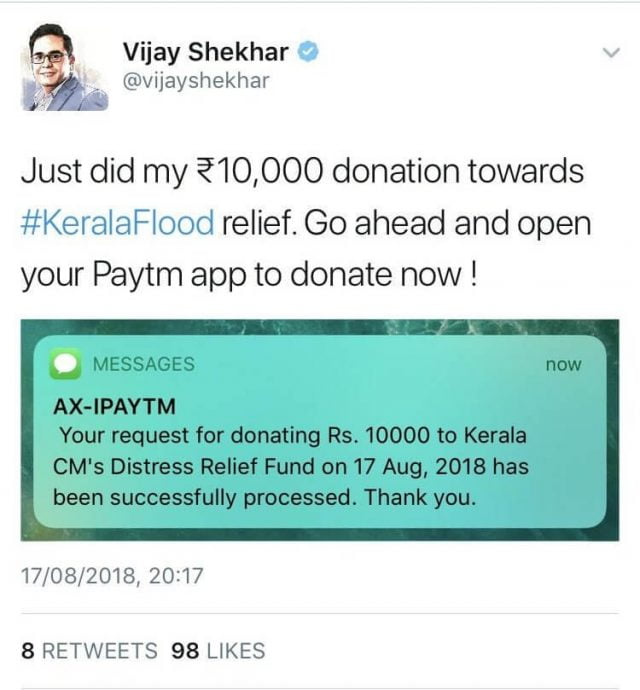 This tweet of his got a lot of flak and bashing considering the extremely low amount that he chose to donate.

Is It Just A Publicity Gimmick?

Sharma just donating a measly Rs. 10,000 when he was just earlier in the year declared India’s youngest billionaire with a fortune of $1.7 billion is a big disappointment.

At a time when the state is battling with such a huge crisis and has approximately 1500 relief camps with an estimated 680,000 people in those shelters, and around 3 lac people now homeless, 10k is a really small amount to donate especially coming from such an influential and wealthy person.

Speaking about the conditions at the rescue camps, as reported by The Guardian, a volunteer by the name of Jayakiran said that, “The camps are very crowded,” and then further stated how, “We are collecting food such as rice but also hygienic materials such as sanitary napkins and nappies, because there is always a fear of diseases breaking out.”

Sharma should have set an example by at least donating more than a month’s salary that an intern is getting in a company these days.

Instead now what it’s looking like is a cheap way to promote his app and just pacify everyone that see even he donated something.

Although Paytm has raised over 3 crores with public donations and supposedly have an additional section in their app where people can directly donate to the floods, and perhaps that was something that Sharma wanted to bring to light, but his way of doing it was a really twisted one.

Nowhere does his tweet mention of a new category for donations to the Kerala floods in the Paytm app nor does he mention how much the app raised, instead he gives this small amount and asks people to get Paytm. 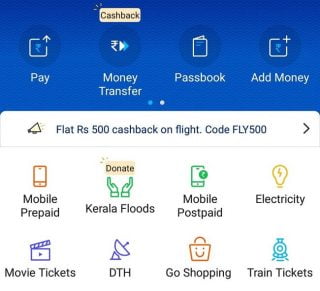 That just looks shady and something to be trolled over which the internet has been doing since he posted the tweet and then subsequently deleted it too.

The Right Way To Donate

The Rajasthan Royals cricketer Sanju Samson was recently in news for donating an impressive Rs. 15 lakhs to the Kerala CM’s Relief Fund. His father Samson Vishwanadh and brother Saly Samson personally handed over the cheque to the CM Pinarayi Vijayan and the sportsman has also asked his fans to donate to the flood victims through an emotional Facebook post.

Apart from that, Sun TV and TVS Motorcompany have each donated Rs. 1 crore each, Hanan Hamid a viral star who was photographed selling fish in a market to fund her education has donated Rs. 1.5 lakhs while south Indian superstar Mammootty and his son have donated Rs. 25 lakh.

The government is also doing their own bit in this with PM Modi announcing a Rs 500 crore of interim relief package along with the Home Ministry donating 100 crores as a response to the Rs 1220 crore demand made by the state.

How To Update Your PayTM KYC: Explained In Simple Steps + Issues Faced