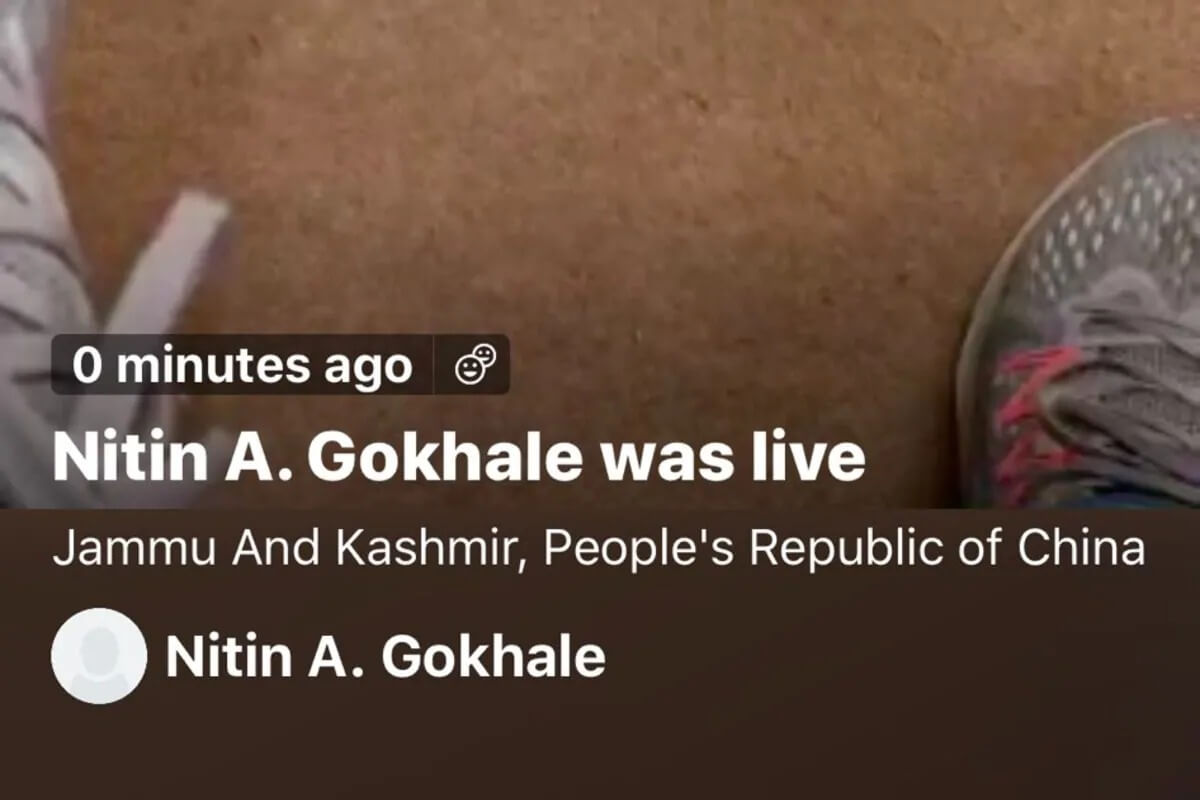 The relationships between India and China are not at the best right now, with multiple incidents happening at the border and the latter’s disapproval of the Atal Tunnel on the Leh-Manali highway and Shinkula Pass and other construction activity that is going on along the border.

Apart from that, the Indian government recently also banned more than 100 Chinese apps among other ways to boycott Chinese products.

In the midst of all this, Twitter India is being bashed currently for the alleged technical snafu they had while National Security Analyst, Nikhil Gokhale was holding a live broadcast.

Nikhil Gokhale on October 18th posted a video about this on his Twitter page talking about what the issue was.

He then tweeted again later in the day on how the geo-tagging, which is a form of location tagging, on Twitter was showing beside Jammu and Kashmir, the People’s Republic of China. 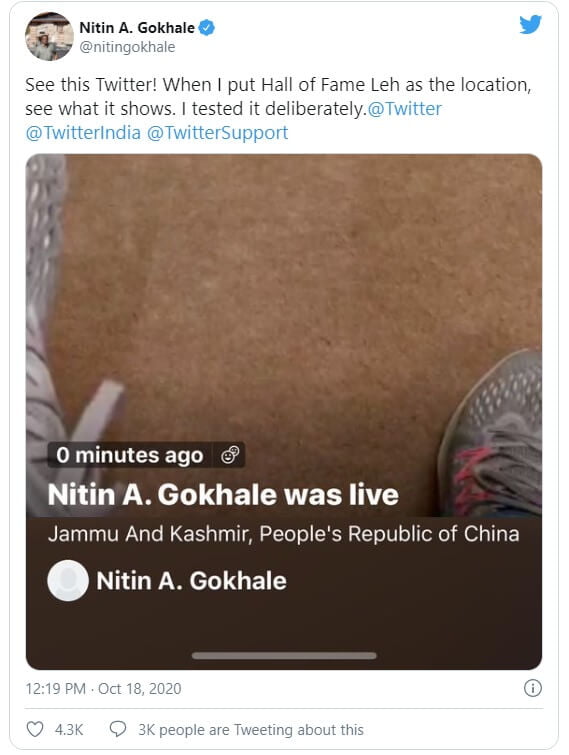 This essentially made it seem like Jammu and Kashmir is a part of China and not India.

Gokhale was doing this live broadcast from a war memorial in Leh, the capital of Ladakh, a Union Territory of India.

This livestream was being conducted from the Hall of Fame in Leh, a memorial for Indian soldiers who gave up their lives while fighting for the country.

While the livestream was on, it was noticed how the location tag stated, ‘Jammu and Kashmir, People’s Republic of China.’

Gokhale also said in a tweet that, “Twitter folks, I just did a live from the Hall of Fame. Giving Hall of Fame as the location and guess what it is saying Jammu & Kashmir, Peoples Republic of China! Are you guys nuts?”

Kanchan Gupta, from the Observer Research Foundation, also tweeted that “So @Twitter has decided to reconfigure geography and declare Jammu & Kashmir as part of People’s Republic of #China. If this is not a violation of #India laws, what is? Citizens of India have been punished for far less. But US Big Tech is above the law?” 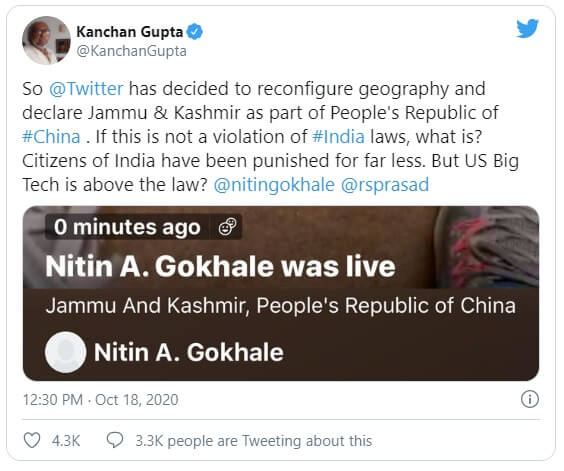 This is actually just after the Chinese phone brand Xiaomi was called out for an error in their in-built weather app.

People were complaining that their weather app was not showing the details of places like Arunachal Pradesh and regions within it.

The hashtag #XiaomiJawabDo has plenty of Indians posting screenshots of the weather app and giving their concerns over this. 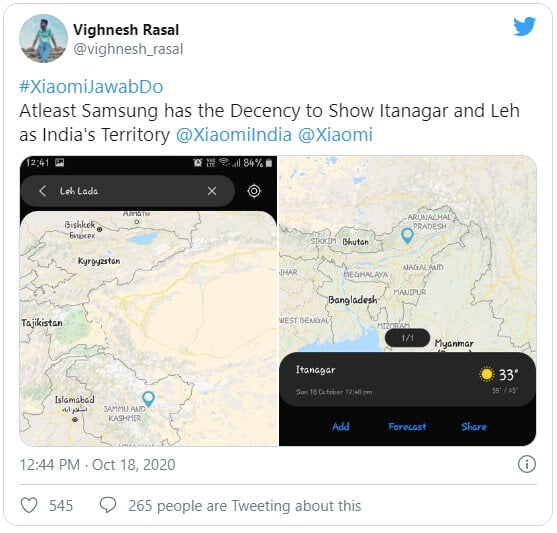 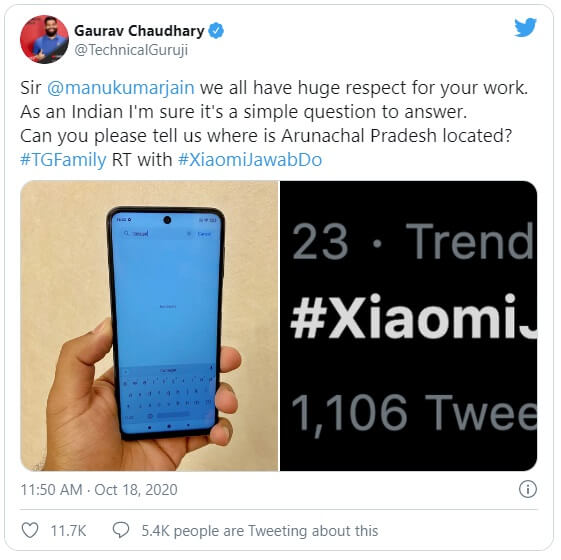 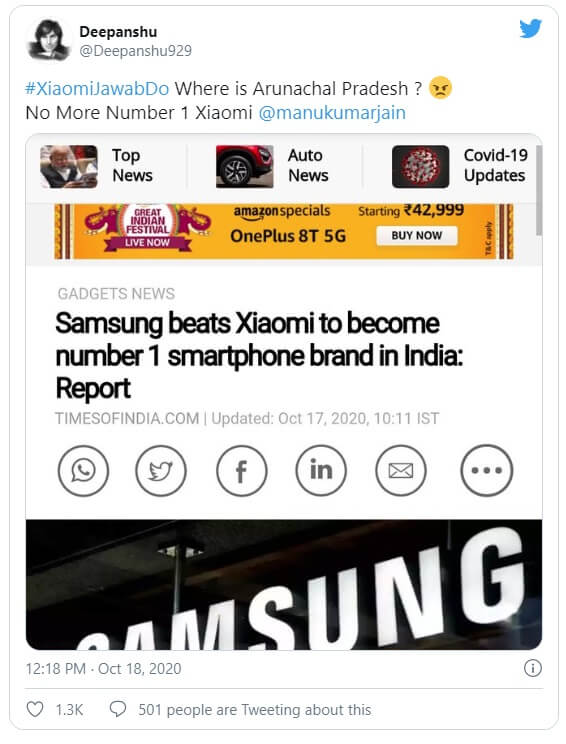 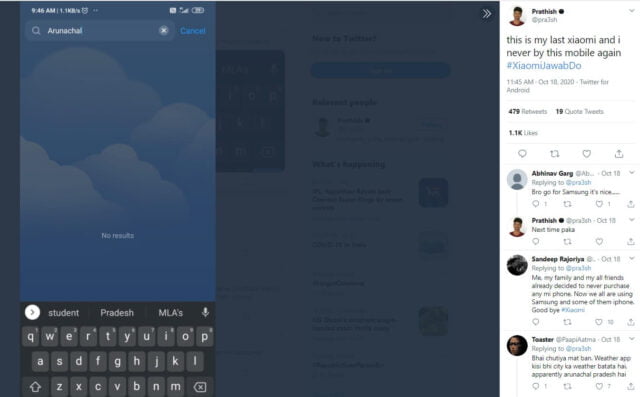 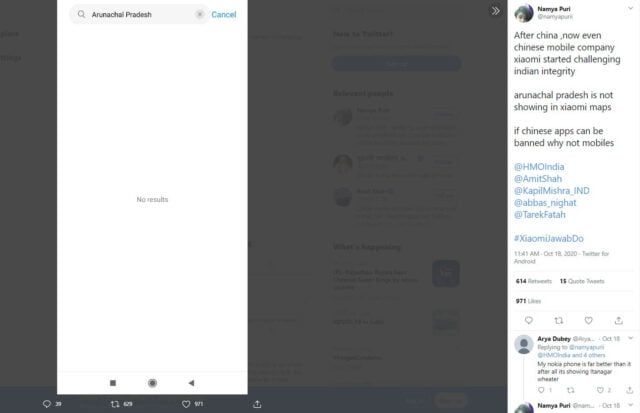 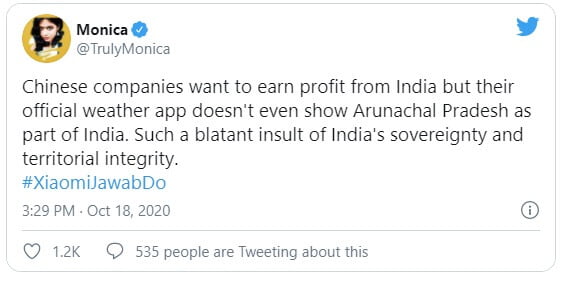 In a statement released on October 18th, Xiaomi said that this was due to a technical error and said, “At Mi India, we take great pride in the love and trust that our fans and consumers across the country have bestowed on us. We would like to clarify that the weather app on our devices uses data from multiple third-party data sources and we understand that for many locations, the weather-related data is not available on the current app. This is a technical error on our application. That said, we are working on improving the app to get the best experience for our users. As always, we are committed to India and our users across the country to provide them with the best possible user experience.”

Twitter too has stated that the issue of the geo-tagging was due to a technical glitch and they have already resolved the issue.