It is a fine Friday today, people are excited for the weekend and probably some are planning to leave office right on time to unwind to the fullest.

However, while many are concerned about their weekend, Indian Twitterarti on the other hand is all up in arms about banning Netflix in the country.

It almost feels like every second day Indians are banning something/one whether it be a tea brand, an actor, a show… apparently we don’t really show discrimination when it comes to boycotting something.

The latest one to join this bandwagon is Netflix with the hashtag #BanNetflixInIndia garnering over 40,000 tweets and trending.

Why Do We Want To Ban Netflix?

Indians on Twitter are in another mood to ban something, this time their ire turning on the popular streaming platform Netflix, specifically their Indian original show Sacred Games which recently put out its second season.

Shiv Sena IT Cell member Ramesh Solanki in Mumbai has also filed a complaint against Netflix accusing them of portraying Hindus in a negative light and defaming their image through their shows.

He even posted about it on his Twitter profile:

The complaint that Solanki filed at Mumbai’s LT Marg police station stated that, “Almost every series on Netflix India is with the intention to defame the country on a global level. It is with deep-rooted Hinduphobia that the platform is portraying the nation in a bad light.”

Taking the names of popular shows like Sacred Games, Leila, Ghoul, and even stand-up comedian Hasan Minhaj’s Patriot Act he said, “I urge the authorities to look into all of the above-mentioned content and take the necessary steps from summoning their team to cancelling their licenses as deemed fit. One cannot allow an incorrect generalisation based on bogus rhetoric trying to defame a religious minority i.e. Hindu in countries other than India.”

While Shiv Sena and Netflix both have not made any public comment on this matter, Solanki for his part sent the complaint to both Sanjay Barve, Police Commissioner of Mumbai and Devendra Fadnavis, Chief Minister of Mumbai.

People on Twitter are also bashing Anurag Basu and the creators of these shows, calling them anti-Hindu and more.

CNN News18 quotes the writer of Leila, Patrick Graham, saying that, “These are stories, work of fiction, there is no point in banning them. If you want to criticize them then write about it or write another story. You cannot call for a ban on content in a democracy.” 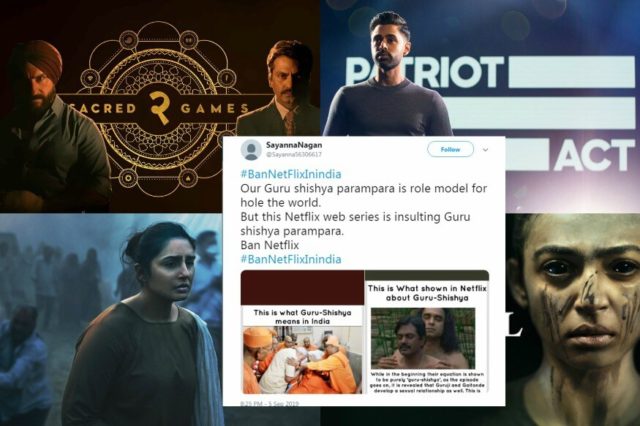 Read More: Why Blame Political Parties, Even You And I Are Highly Intolerant And Rash Today

A lot of people have a lot of different things to say about this need to ban.

I don’t support #BanNetflixInIndia. But from Leila to Sacred Games, #Netflix is commissioning content in India disrespectful and hurtful for Hindus.
Tolerance can’t be consent to be targeted. Instead of baying for ban, just unsubscribe Netflix. Watch Hotstar, Amazon Prime, Zee5

Anurag Kashyap and the makers of the Sacred Games have been part of the controversy for pushing Hindu-phobic content in their show.

The complaint cites @NetflixIndia shows Sacred Games and Leila as two series on the platform which paints an inaccurate portrait of Hindus and India. Apart from them, the complaint also mentions comedian @hasanminhaj and the series Ghoul.#BanNetflixInIndia pic.twitter.com/UzaOEHGn7R

Enough is Enough
Its hightime we Hindus unite and tell everyone that HINDUS are not doormat that any Tom Dick Harry can just walk over
If you want our money if you want our subscription, stop disrespecting us@ippatel @ShefVaidya @KapilMishra_IND @TajinderBagga #BanNetFlixInIndia pic.twitter.com/kUCQmOwRm6

I have been noticing it for a while now. Netflix's Anti-Hindu agenda is a fact. All their Indian originals are based on this Agenda.
Looks like all failed and jobless commie directors and writers found their new harbor in NetFlix!#BanNetflixInIndia pic.twitter.com/PmLVcjogm1

Some people though are trying to figure out what the whole issue really is.

So we should #BanNetflixInIndia because @ZeeNews is already giving us genres like farce, apocalypse and comedy ? pic.twitter.com/fn8nBrqsET

Sir, if you #BanNetflixInIndia, how are you going to watch Netflix and write such detailed complaints the next time you are offended?

To be honest, this whole banning concept now seems to be losing any relevance and could hurt us only. If every day we are asking for something so trivial to be banned then if we try to raise a voice for something actually important would people pay attention?

What do you think about this whole ban? Is Netflix really anti-Hindu or this is just another example of people making a mountain out of a molehill?