Everyone seems to be getting on the bandwagon of the Fit India Movement that was recently launched by PM Narendra Modi to commemorate the National Sports Day (29th August). The campaign encourages everyone to devote time for exercise.

However, author and journalist Manu Joseph doesn’t seem to share this excitement. His article which was published in Livemint suggests a rather pessimistic view.

He mentioned things like “The food industry is largely an unethical industry. All “healthy” bread are, for all practical reasons, sugar. “Brown” bread is mostly maida, which is sugar, mixed with a brown coloring agent. Also, technically, bread is foam.”

His observations are not uncommon but the sad truth is even with the knowledge the general public consumes the poisoned or altered products anyway just because they’re affordable. I can’t make up my mind on whether I agree or disagree with him and I kept oscillating between the two throughout the length of the article.

I fail to associate myself with his ideas in entirety but I don’t wish to besmirch him. I appreciate the objective of the movement even though it may seem utopian.

Do We Know Our Food?

Joseph mentioned in his article that unethical business practices such as selling brown bread that’s not brown, orange juice that’s not orange is what is the hurdle in achieving a fit India. He claims that this movement is an utopian vision which is difficult to materialize in reality.

However, I beg to differ. In my opinion, most Indians are not so gullible as to not know about the malpractices of the food industry, but like Premchand’s Jokhu, we consume the poisoned products anyway just to quench our thirst.

The Health Ministry under Dr. Harsh Vardhan has launched the ‘Poshan Maah’ with this campaign to promote healthy and balanced eating practices, thus combating malnutrition. The present government loves to blow its own trumpet, so I see the apprehension but still, it’s a small but a good start.

Is Moderation In Food Futile?

Mr. Joseph calls it a foolish notion he says “moderation is a foolish idea. It is ambiguous, conciliatory, democratic and sentimental, and often a front to eat what you should not eat. Abstinence has the clarity of clear logic. It gives you direction. It’s like integrity—all or nothing“. When asked about his diet, he responded “Six days a week I don’t consume any grain or any other form of refined carb /sugar. I eat my first meal at noon and second by 8 pm. Black coffee in between. On Sundays and birthdays, I eat like a fool.”

This is not a diet most people could implement in their busy lives that too in a labor-intensive country like ours.

Also Read: Health Issues Among Millennials Might Be Increasing, According To Studies

Indian start-ups like GOQii, Curefit and Healthifyme are helping people stay active by setting goals, suggesting exercises and diets, providing sessions with coaches, advising on what to eat, prescribing work-out methods and encouraging to quit smoking.

Food Safety and Standards Authority of India (FSSAI) has an app, Eat Right Quiz, to provide information on food safety and nutrition.

I share his opinion that fitness icons have the means to provide for expensive medical procedures, top-chefs, and doctors which the general public lack and agree with the statement ” The problem with health “influencers” is the same that all motivational speakers pose. What they are saying is, “be like us”, which is useless advice.” I still believe that health is everyone’s right and control over one’s food habits and common exercises go a long way to help people enjoy a healthier lifestyle.

Yes, there won’t be toned muscles and thigh gaps but there is more to fitness than just appearances.

Is Feminism An Excuse For Binging On Junk Food?

Joseph thinks so with his arguments like “Invoking feminism to consume sugar is not feminism; it is called eating” and “Fatness is a type of sorrow. And the true nature of most sorrows is boredom, which people extinguish through the entertainment of eating.”

While some women may have insecurities piling up their chests because of not having an hour-glass figure; feminism aims to drown these absurd notions. This goes beyond the woman’s right to eat pizza.

Lifestyle reforms are needed if this generation wants life expectancy beyond 50 and this movement brings limelight on the topic of fitness which is not one of those discussed in Indian households.

However, th cynical opinions of people like Mr. Joseph may lower the enthusiasm of masses and bring down the already low will power to exercise to a non-existent level.

Tell us your thoughts on the matter. 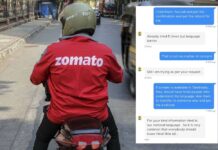