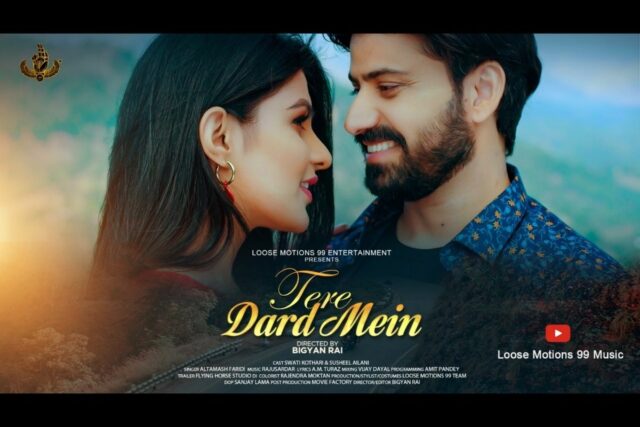 January 19: After Pyar Ka Nasha, Loose Motions 99 Entertainment is all set to release Tere Dard Mein Starring Swati Kothari and Susheel Ailani once again. The teaser of Tere Dard Mein has been released, gauging a good response from the audience.

Tere Dard Mein will be released on 21st of January 2022 under the banner of Loose Motions 99 Music on youtube, which is also a very quick venture right after the launch of Pyar Ka Nasha.

Well, The story of a really cute couple indeed in love but then getting separated from each other for some reason with the hyperlapse of their memories and moments is depicted in this music video. Recently music videos and some stories are pretty common these days, but this has its own unique flavour and essence to it.

Tere Dard Mein is directed by Bigyan Rai, and the soulful voice is given by Altamash Faridi. This song is so soothing, and the visuals give a raw winter love feeling; as we all know, winter is a lover’s season; it will bring in a spark of romance for new couples.

Coming down to Susheel Ailani and Swati Kothari, they are sharing the screen for the third time together, and it seems that the audience really loves their chemistry; after all, we give what the audience wants.

Susheel Ailani is a multi-talented Actor, Model and entrepreneur as well. Loose Motions 99 Entertainment company is a dream to believe as well make them into reality which started in 2017. It is not just a music company but also produces various Short Films, organises Events, etc.

Susheel Ailani is very excited and has high hopes from Tere Dard Mein for the rawness of love it has. Tere Dard Mein is a love story that everyone would love and want to learn from as well. It should break the bars the way it is entering the world of Music videos. Wishing Susheel Ailani and  Swati Kothari good luck.