For the first time in the history of Telangana and South Indian politics, a transwoman was all set to make history. 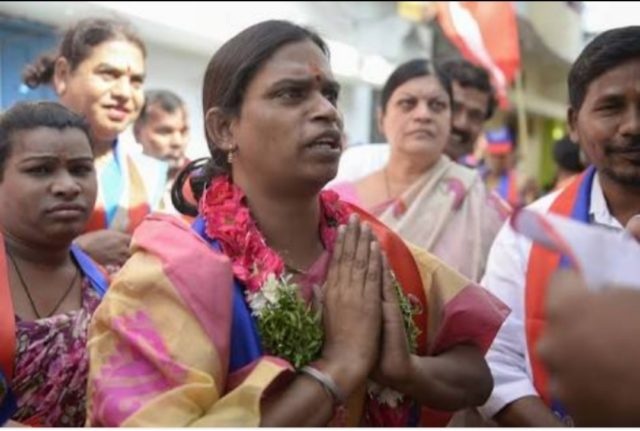 Alas! As some hooligans would have it, she was abducted to silence her and the oppressed community she represents alleged the LGBTQIA+ communuty and BLF leaders.

Chandramukhi Muvvala, a 32 year old transwoman contesting for the Bahujan Left Front from Telengana’s Goshamahal constituency who was found to be missing two days ago, has reported to the Banjara Hills police station in bad shape on Wednesday, 28th November 2018, evening.

The state is all set to go into elections on the 7th of December 2018 when all the drama unfolds and suddenly just days before it, one of its MLA candidate goes missing.

Chandramukhi was in contact with her friends till 8 am on the 27th of November, testifies the campaigners and her family. There were several attempts to contact her after this only to find her phone switched off.

Chandramukhi’s mother Anithamma was baffled and worried as to where her daughter had gone. The Telengana Hijra Intersex Transgender Samiti approached the Banjara Hills police station and filed a missing report.

A haebus corpus writ petition was filed with the High court which directed the State Police to present Mx. Muvvala at the court before 10:15 am on 29th November, as reported by The News Minute.

Along with Inspector Govind Reddy, 10 teams were immediately dispatched to sieve through the state and districts of Anantapur in neighbouring state Andhra Pradesh.

Within a few hours of the F.I.R being filed, police found CCTV footage of Mx. Muvvala leaving her home in a nightie covering her face with a pink scarf and hurriedly entering another lane.

With this information, the police tried to conclude that Chandramukhi had left on her own and was not kidnapped.

Anithamma cried foul at this information as she was fully convinced that the girl in the footage wasn’t her daughter.

“That’s not how my daughter walks and she doesn’t own a pair nightie, she usually wears shorts or pants at home. For all that it matters, she’d never cover her face with a dupatta as she never liked wearing them over her neck in the first place,” said Anithamma.

“Chandramukhi Muvvala, a transwoman activist who is contesting the MLA elections as a candidate of BLF (Bahujan Left Front) in Goshamahal constituency, has been missing since early morning today, 27th November 2018.

She went missing from her home, and friends from the transgender community who arrived to help her with campaigning were unable to locate her all day. She has been unreachable and her mother has been in a state of extreme despair. She is feared to be kidnapped.

A complaint has been filed in Banjara Hills Police Station near her house. As an activist with Telangana Hijra Intersex Transgender Samiti Chandramukhi had strongly protested against atrocities upon members of the transgender and hijra communities, and had always been an outspoken voice at many rallies and public events upholding the self respect of transgender people. Her decision to contest was also a decision that she felt would help the entire community.

We fear for her safety and condemn the lack of safety measures organized for her and for other women and transgender candidates, which acts as a strong force that dissuades transgender persons and women from joining politics. Chandramukhi’s campaign kicked off just one day before she went missing.

We demand that the police act immediately to trace her.”

On the wee hours of Wednesday, Chandramukhi managed to escape her captors and struggled her way to Secunderabad and reported at the police station there.

Badly dazed and disoriented Chandramukhi refused to narrate her ordeal to the police and chose to present them at the High court where she’d be produced on Thursday.

What does her abduction indicate?

Leaders of the BLF and activists allege that those who didn’t want a transperson compete in an election where probably the ones behind her abduction.

Telengana’s trans community has witnessed many atrocities at the hands of several influential hooligans over the past years.

In light of that, Mx. Muvvala’s decision to contest the elections was so that she could help and liberate her community along with all those who suffered at oppressive casteist hands.

While we wait for further information on her statement and what happened to her, the manner in which this case is handled will either serve to strengthen or weaken the trust Indian LGBTQIA+ community has in the efficiency of the state and the protection it should be providing.