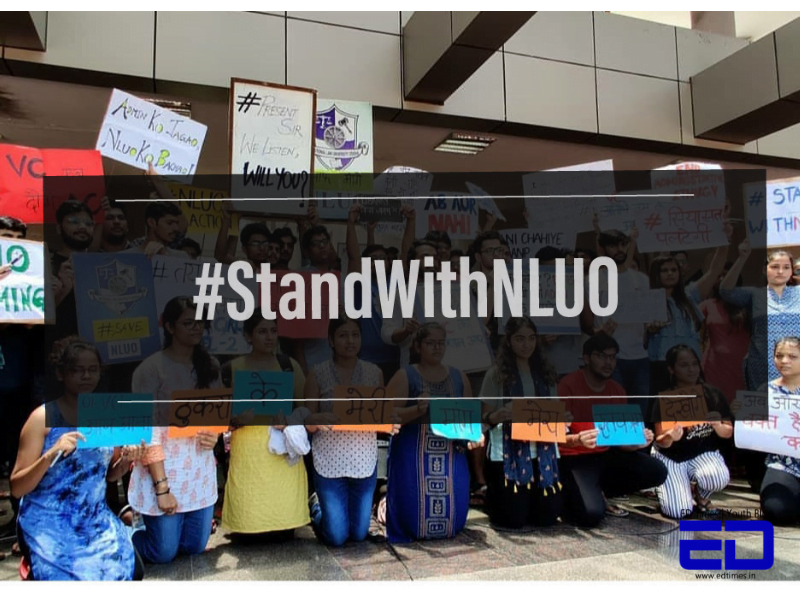 From silent government to failed administration and disappointed students, the story had it all. Until one day, the students decided they have had enough. Welcome to NLU-O!

The students of National Law University, Odisha went on an indefinite strike since 24th of July, boycotting all the classes as a part of their peaceful protest against the university administration.

The students have concrete demands that they need the administration to fulfill before which the strike does not seem to end.

The construction of a “world class library” that had been promised to them since the inception of the institution. At present, the construction of a building which was to be used as a library has been stalled since past 8 years, the reason to which has not been clarified.

The construction of second Girls hostel for students of batch 2017, who were asked to shift to a half constructed, “fungal infested, water logged hostels” under uninhabitable conditions

A proper explanation as to why their fees has been hiked by Rs.30,000 taking the annual fees to approximately Rs.2 lakh per student.

A transparent conduction of examination where students would be allowed to see their end semester scripts.

Transparency in faculty appointment system and release of the results of faculty evaluation survey that are conducted at the end of every semester.

Establishment of a dispensary with proper medical facilities and a full time nurse to cater to the patients due to non-availability of hospitals in the remote location of the campus.

Removal of curfew timings which have not been revoked despite the submission of 50% approval forms by the parents.

If you would read the demands in details, you would notice that these are the most basic facilities that should have been given to the students without even asking for it.

A student in India pushes his limit to compete against 50,000 students who appear in CLAT to finally enter the “prestigious” colleges of their dreams.

These students are future lawyers, judges, and watchkeepers of the constitution of India who are being denied their basic rights to adequate living and academic conditions in an institution that teaches law.

If you would meet a student of most law colleges of India, they would tell you that this is not what dreams are made of.

Their idea of a perfect law school gets ruined when they enter the premises that take hefty amounts in the form of fees and doesn’t even ensure a proper hostel, healthy food, a basic resourceful library or a proper teaching system for its students.

The movement has found its solidarity with law students and student associations from different law schools of India, standing up for NLUO.

Even the alumni of NLUO have released a statement, supporting the cause.

The college admin being their lethargic self is still loose on accepting the conditions of the students and have been coming up with the same old rhetoric of “hamare haath me kuch nahi hai”.

The admin even tried to stop media from entering the campuses but ultimately had to give in.

If protests are the way to force the system to put out their earbuds and listen, then students have learned their way out.

This protest is a prime example of what could happen when the youth decides the speak up and hence, the nation today stands with the students of NLUO.