Burger Singh, founded by Kabir Jeet Singh, is one of the fastest-growing Indian fast-food chains serving burgers with a unique Indian twist. The burger chain which started off with a small outlet in Delhi’s Gurugram, runs a total of 28 outlets including 2 in London, making an annual turnover of 26 crores! 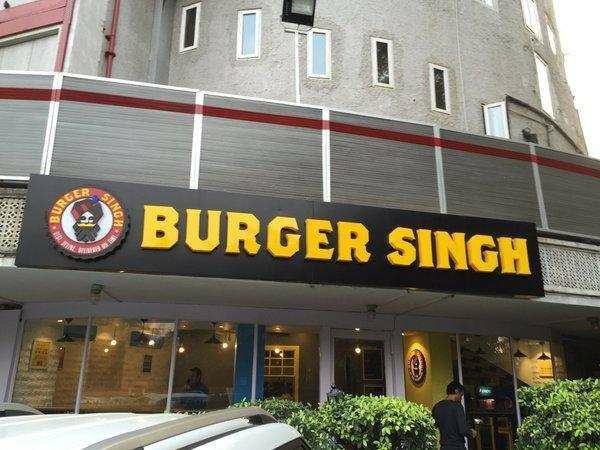 In 2007, Kabir Jeet Singh was a management student who was pursuing his MBA degree from Birmingham Business School, United Kingdom.

As an Indian overseas student, he worked at a burger outlet on the night shift to make his ends meet.

At the end of the evening shift, he got a free burger to feed himself but as he grew tired of eating bland burgers, he decided to experiment with giving an Indian spicy twist to the firangi burger by adding indian spices and masalas to it.

“I went to a nearby store and purchased some Shan masalas and tried mixing them in the patty. And to my surprise, it tasted awesome. From then onwards, I made it a habit and gradually started offering that Indo-British fusioned burger to my friends there,” says Kabir.

Singh’s desi burger was an instant hit among the English customers and gave Singh the name ‘Burger Singh’, that’s when the idea behind the venture was born.

Setting Up The First Burger Singh Outlet In India

After completing his MBA, Singh got a job in standard commodity trading in the UK, but the idea of Burger Singh’s venture never left his mind. 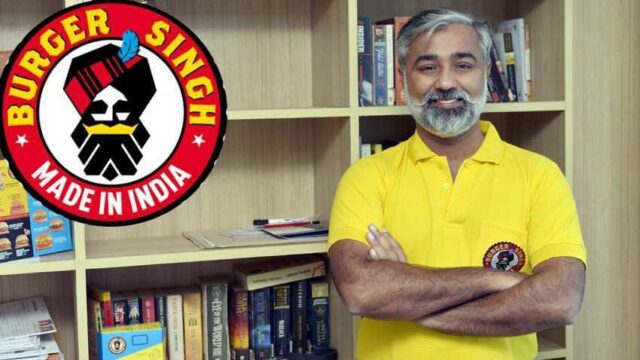 Singh worked with Beer Cafe for a couple of years and opened the first Burger Singh with the investment of 30 lakh in a 98 sq ft shop in Golf Course Road in Gurugram, Delhi with the help of his friend Nitin Rana.

“It was a humble beginning where I was making the burger patty myself. The value proposition which we were aiming at was the delivery of burgers. At that time no one was doing burger delivery rigorously and we wanted to build a Dominos kind of delivery platform for our customers”, recalls Burger Singh founder, when asked about his initial days of running the outlet.

Being Different And Standing Out

Burger Singh was the first venture to experiment with adding an Indian twist to the burger, which was still seen as an American food item in India.

While the other companies sold the basic old burger, Burger Singh focussed on serving Indian flavors in the attractive burger format, to suit Indian taste buds. This was the USP of the venture which became quite popular in a short span of time.

Another element that helped in the popularity of Burger Singh was the building of a quick delivery system, which was not catered well among the burger food chains in India.

“We hit the unserviced spot of the customers. The customers were seeking a value for money product that we were serving to them at their doorstep”, adds Singh.

The products sold by Burger Singh were widely accepted in the Indian market and they had to shut their store after a stipulated time on weekends.

The rising popularity and demand paved the path of setting up several outlets across the country and even abroad.

At present, Burger Singh has 28 outlets, of which 20 are in Delhi/NCR, one in Pune, two in Dehradun, and two in Jaipur. The food chain has three franchises, including one in Nagpur and two in London. Burger Singh records an annual turnover of Rs 26 crore.

Growth and challenges go hand in hand and in the case of Burger Singh, the biggest challenge was to adapt the menu to suit Indian’s demands.

As Singh explains, “In India, customers are very demanding. It is not like abroad where 50-60 percent of sales come from one main item in the menu list. Here, we need to have a larger menu. At Burger Singh, we had to create a large menu where we retire our products every quarterly and bring in new items.”

When asked about dealing with competition with the contemporary burger food chains like Mcdonalds and Burger King, which are also very popular in the Indian market, Singh adds that anybody who wills to serve customers instead of him is his competitor.

Singh believes in taking his competition seriously and does everything to beat it and remain ahead in the race.

Many Indian food joints and brands have been sued by foreign brands on the grounds of copying their trademark by keeping similar names or logos.

Burger King, an American fast-food chain, which made its debut in the Indian market in 2014, had sued several Indian fast food and restaurant brands with similar names.

One such case was of Mr. Singh Burger King, operated by Ravinder Pal Babbar, a Ludhiana-based street vendor,  who was forced to change his outlet’s name to Mr. Singh Food King after a trademark case was filed by Burger King.

Similarly, Starbucks also sued SardarBuksh, a Delhi-based cafe, for imitating their brand name and logo. This forced them to change the name of their coffee chains to ‘Sardarji-Baksh Coffee And Co.’

Surprisingly, Burger King has not filed any case against Burger Singh and the two burger giants exist together in the Indian market.

Although, there’s a tough competition between the two fast-food chains and both try their best to counter each other by introducing new varieties and becoming better than the other.

After climbing the ladder of success and building a successful venture in the span of 7 years, Kabir Jeet Singh, the founder of Burger Singh, is hungry for more.

He plans to open 75 outlets of his food chain across India and also talks about signing the deal of opening 18 outlets in the UK in the span of 3 years.

Can The World Survive Without Human Beings?

Reviews Brand Voice - January 22, 2022
Apple is one of the most renowned companies in the world. It is easily identifiable and has been a market leader ever since its...

Reviews Brand Voice - January 22, 2022
Mumbai, January 22: The death of Sushant Singh Rajput had shaken everyone from Bollywood to media to even common people. With the death of...