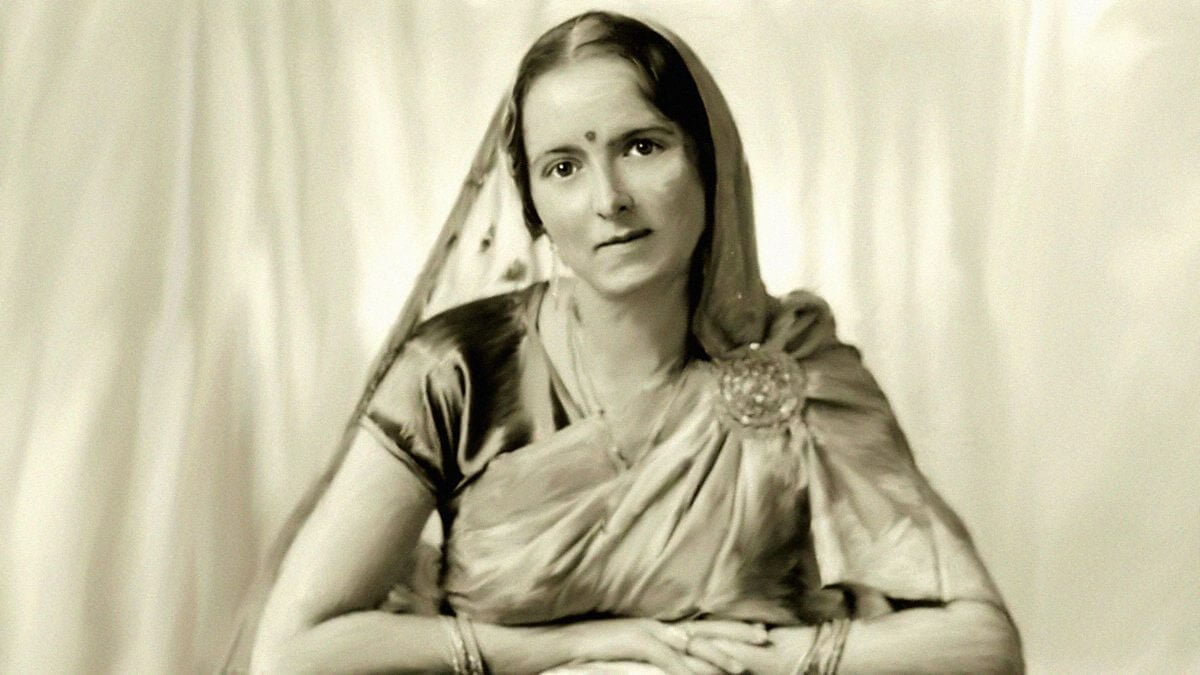 Clad in cotton white saris and living in a flat above a garbage site in Delhi, she spent her later days feeding neighborhood cats and fighting for animal rights.

Are we talking about the same Savitri Devi who called on Holocaust as Allied propaganda and loved Hitler till death?

Vilifying egalitarian laws and contriving to associate Hindus with the Nazis through her personalized version of Hinduism exposed her unhinged admiration for Hitler.

The alt-right groups of Europe and America are obsessed with her books namely the Lightning and the Sun and the Gold in the Furnace. The former illustrates her theory about Hitler being an avatar or the incarnation of God Vishnu whereas the later pitches that the National Socialism will rise against all tides.

Savitri Devi was born Maximiani Portus to a Greek father and an English mother in Lyon in 1905. She opted for the Greek nationality when she came of age. Her sympathies with Germany began with the deliberate blaming of Western Allies for Greece’s humiliation during the Treaty Of Versailles.

Savitri imbibed Anti Semitism which was a predominant attitude in pre-1940 France. Although she disavowed Christianity but retained its anti-Semitism prejudice, identifying herself with National Socialism.

Her hatred for mankind was the core of National socialist values which centered on life instead of a man. Savitri’s first feelings for the Aryan race were stirred by the swastikas on the palace of Athens built by the 19th-century German Archeologist, Heinrich Schliemann.

Oriented towards the “Aryan” doctrines propagated by Nazis, she said Hitler’s desire to eradicate Jews and restore Aryans back to their rightful position made him her “Fuhrer”.

She persisted that Germany and Greece had the legitimate right to unify the entire world in one territory.

Savitri accursed Judeo-Christianity for destroying the glory of Greece. According to her, Greece was the Aryan civilization’s mythical utopia.

She left for India in 1932 to trace back the roots of the Aryan civilization. She wanted to experience a lively version of the racial Apartheid system that preserved pure Aryan race by forbidding inter-caste marriage.

Maximiani changed her name to Savitri Devi in the honor of the Indo-Aryan Goddess. She mastered about seven languages, studying Bengali and Hindi at Rabindranath Tagore’s Shanti Niketan school.

Upholding Arya –Nazi causes and Hinduism paved a discreet way for her entry into the political scene between the wars.  Savitri worked for the Hindu Mission in Kolkata in the 1930’s as an anti-Christian preacher politicizing the religious communities in India.

She argued Hindus to be the true heirs of the Aryan race countering Muslim ascendancy.

Savitri offered her services to Swami Satyananda, president of the Hindu mission who shared her admiration for Hitler, allowing her to salt Nazi propaganda with the Hindu ideologies.

You Can Also Read: ‘Bacha Bazi’: Young Afghan Boys Forced Into Sex Crimes Due To Poverty

Her Pro Axis Propaganda In Kolkata

In the 1930s, Savitri married Dr. Asit Mukherjee who was a publisher with pro-German sympathies. Asit Mukherjee was the editor of the New Mercury, a pro-Nazi bimonthly funded by the German consulate in Kolkata.

The Mukherjee’s entertained British and American servicemen in Kolkata, shrewdly gathering information they slip. They passed them onto four Indians who crossed Burmese frontiers every fortnight reaching Japanese intelligence officials.

In fact, their leads were instrumental in the blowing up of several Allied aerodromes and units in Burma.

When Savitri Devi risked being expelled from India after the outbreak of the war, Dr. Asit Mukherjee offered to marry her.  Her marriage was ruled out as allegedly celibate purely for passport reasons.

Although chastity in marriage might have suited well for Mukherjee who believed in yogic powers discoursed through sexual abstinence,  Savitri was open-minded and had many sexual affairs with men and women.

She even grew close to a beautiful looking blonde woman of her age who was condemned as a war criminal during her imprisonment.

Savitri saw prolonged significance in Hitler’s choice of the symbol Swastika as the visible link between Hitler and Orthodox Hinduism.

In her book, the Lightning and the Sun, she found in Hitler “a man against time “, destined to bring an end to the Kali Yuga as an Avatar Of Kalki who comes at the end of every age.

Her elaborate synthesis of Nazism and Hindu myth advocated the flaming of National Socialism through the Kali Yuga as a basis for a New order prophesied  by Hitler himself in 1928,” “I am not he; but while nobody comes forward to prepare the way for him, I do so.”

Savitri Devi’s uncensored and unsanitized writings about how Aryans are entitled to be superior to the aboriginals and the perpetuation of race discrimination was necessary for a mythical Golden Age to preserve mankind still forms part of the History of the extreme right groups all over the world.