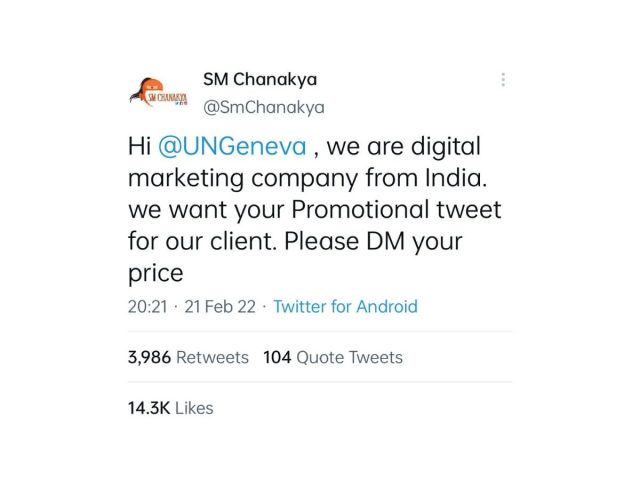 New Delhi (India) February 23: The recent controversy on Rana Ayyub’s money laundering case was heated, and the biased tweet in support of her by UN Geneva faced massive outrage from Indians. This tweet was highly trolled in the Indian market, and a tweet against it by SM Chanakya went viral where they asked them to give them their clients’ tweet orders as it appears to be a paid one.

SM Chanakya is a growing Indian digital marketing company of Tajinder Pal Singh Bagga. Their tweet was shared by over 4000 people, followed by endless memes by Indians.

One should note that an “ED source” document claims that the journalist collected over 2.69 crores for charity causes between 2020 and 2021 through the crowdfunding app Ketto. On February 11, the agency froze 1.77 crores in her bank account.

Accusations against Ms. Ayyub have been called a “smear campaign” by her. “I am convinced the charges levelled against me will not survive any fair and honest inspection,” she stated in her statement. Her supporting tweets show the reason behind her confidence.