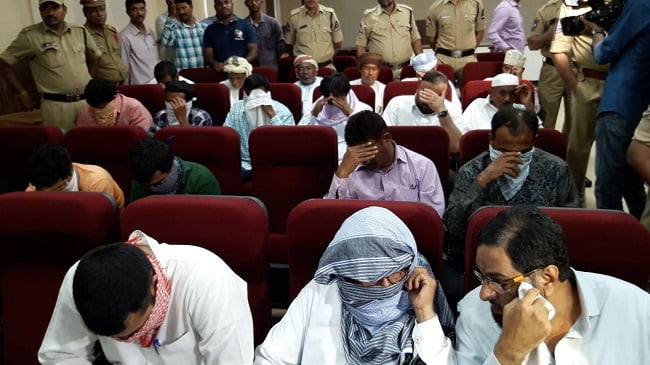 The recent arrest of twenty people from Hyderabad including five Omani and three Qatari citizens has made quite a news. In furtherance of the arrest, many brokers who ‘arrange’ child brides for foreign sheikhs have also been trapped under the radar of the police. The arrest, made in connection with the sale of underage brides to Arab sheikhs is one of the more high-profile arrests on an issue, that has seldom received the coverage or awareness it deserves. Hyderabad is a lovely city that is known for a lot of things across the country, whether it’s the biryani or the Charminar. However, incidents such as this shed light on another reason why the city has come to be infamous.

This unholy practice of taking, marrying and systematically exploiting child brides seems to have taken root in Hyderabad since the 1970s. This has led to the creation of a bizarre marriage market- which is not very different from sex tourism in Hyderabad.

In most cases, rich Arabs visit the city on a visitor’s visa, arrange for a marriage and divorce them after a period of stay, which usually ranges between fifteen days to a few months.

Once married, these child brides have an undetermined fate. They are often sexually and physically abused. In certain cases, after being married for a few days the Sheikh divorces the young bride leaving her helpless.

Read: Muslim Women Pay For Sex With Maulvis To Return To Their Previous Husbands

Very often, their documents are forged for their travel to the country of the sheikh that they are being married to. This makes their return after being divorced and abandoned even more complicated and difficult.

A Systematic Targeting of Poor Families

The Old city of Hyderabad becomes a target for this due to the high slum population. The families that marry off their daughters to rich Arabs usually belong to low-income groups and live in these slums.

Since they receive bride price upon the marriage, it becomes an attractive prospect for them and helps them run the family.

The brides in question are often lured into this trap with hopes of a wealthy life which includes traveling in cars, staying in luxurious hotels, expensive attires and a luxurious way of life.

Thus, the innocent and gullible are misled and trapped by the brokers working for the sheikhs who end up “buying” these girls under the pretext of marriage. These child brides are then divorced and abandoned after a short period of time and left helpless.

The Role of Brokers

What is important to note here is that these rich Arabs often have brokers at their disposal who work as intermediaries and help them find the child brides. These brokers charge these Arabs for the services that they render.

For instance: the broker in this recent case, Farid Ahmed Khan, allegedly charged somewhere between one lakh to three lakh rupees for each marriage depending on the foreigner’s capacity to pay. He also arranged forged documents for the child brides journey from India to the Sheikhs respective country.

As of now, the police have identified thirty-eight such brokers, including women, who deal with the marriage of underage girls to rich Arabs.

What we also need to realize is that while in this case the accused were arrested, however, many such cases pass by unnoticed and have been taking place since the 1970s. Thus, in order to stop this practice, it is essential to crack down on these brokers and their links. If no action is taken then the Arabs will continue to exploit these young child brides after “buying” them from their poor families, while the brokers earn a handsome profit.

Why Bakra Eid Is The Stupidest Festival There Is

What Is Troubling About The Supreme Court Judgment On Triple Talaq