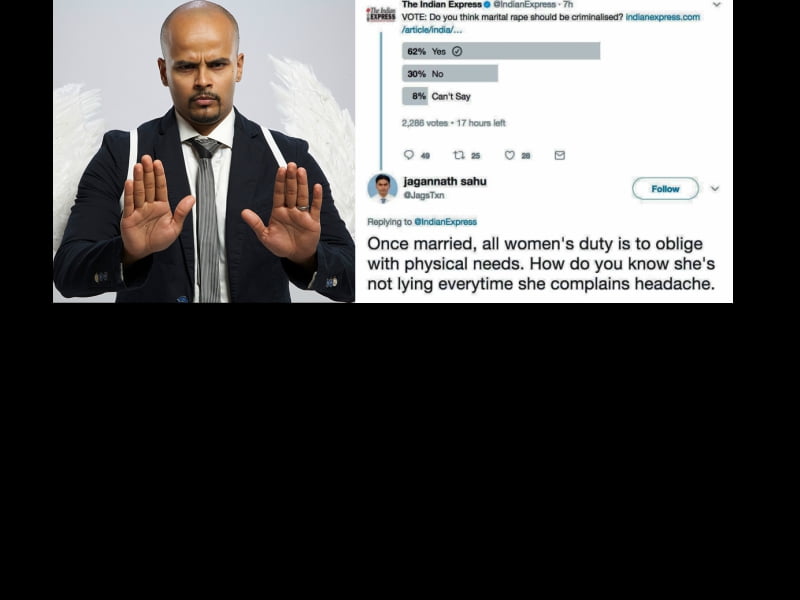 Guess what happened when I tried to mess with the patriarchal idiots and their fragile masculinity? The Pandora’s Box of misogyny, sexism, hatred, ignorance and TOXIC MASCULINITY blasted open.

A comedian, Sorabh Pant had shared a photo of a survey conducted by The Indian Express asking whether or not marital rape should be criminalised. 62% of the people said ‘Yes’, a whopping 30% said ‘No’ and 8% said ‘Can’t Say’. 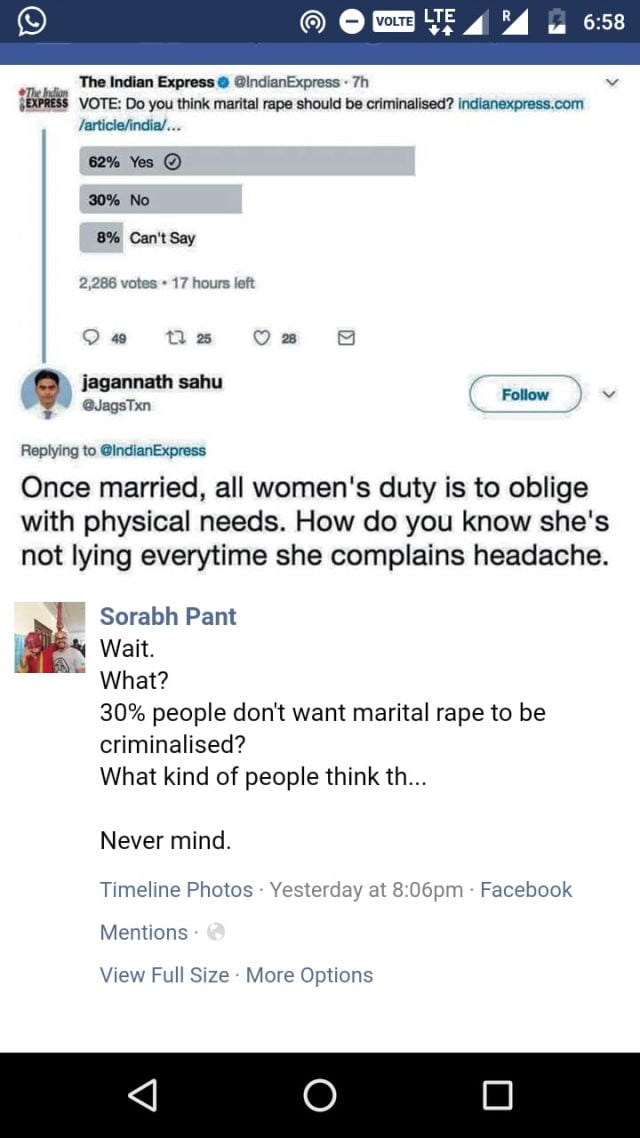 Sorabh Pant also wondered as to who were these 30% of people who were taking a stand for rape and he shared a comment on The Indian Express’ post that explained it all.

This person highlighted what half of India and our present Government thinks about marital rape. For them, the institution of marriage is so ‘sacred’ that it is impossible for them to acknowledge the existence of marital rape. But mind you, this is only restricted to the ‘Sanskari Indian society’ and not people from the Western countries who are promiscuous just by the virtue of being born in those countries.

I made a comment on Sorabh Pant’s post highlighting how fragile the masculinity of these men is that they can’t take a simple ‘No’ for an answer and the wife has to lie about a headache. 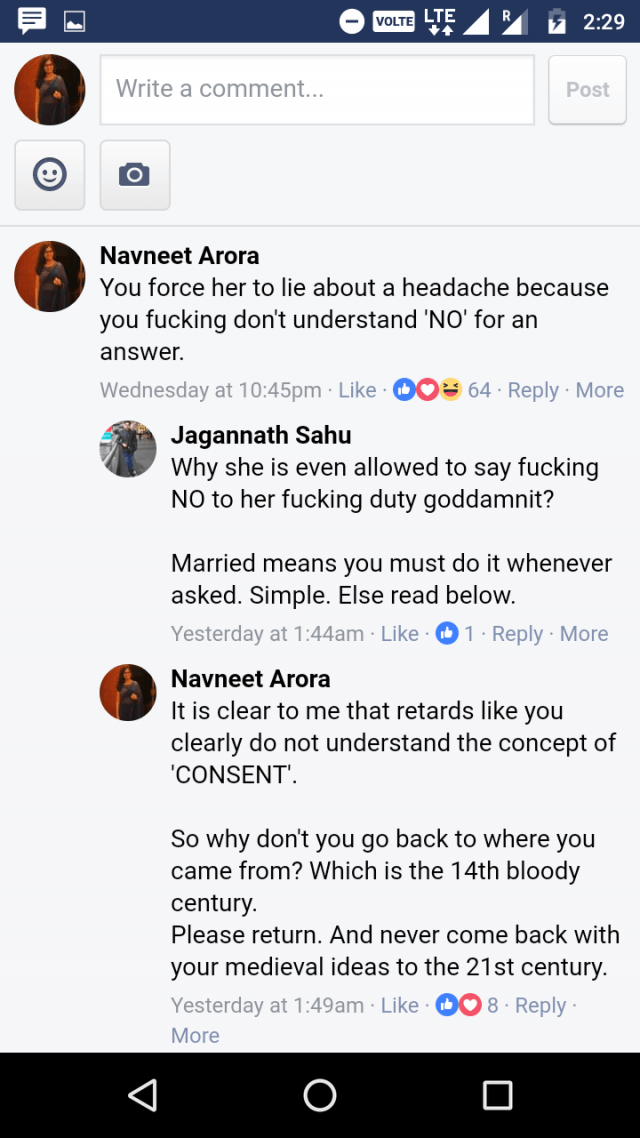 What followed is a stream of misogynistic comments and a clear manifestation of the sick (for the lack of a better word) mentality of some people in our society.

I made this comment at night and woke up in the morning only to see a stream of replies to my comment of how a ‘stranger can rape a woman but a husband can’t’ because of course, he is THE HUSBAND.

People in the comment section jumped to teach me a lesson about the duties of a ‘good wife’.

Another fellow pointed out, “A stranger forcing sex and a husband forcing sex are not the same.” This while he was completely ignorant about the fact that he used the word ‘forcing’ in both the situations which defeated his point. But obviously, there exist such feather-brained humans who cannot comprehend a simple ‘No’. 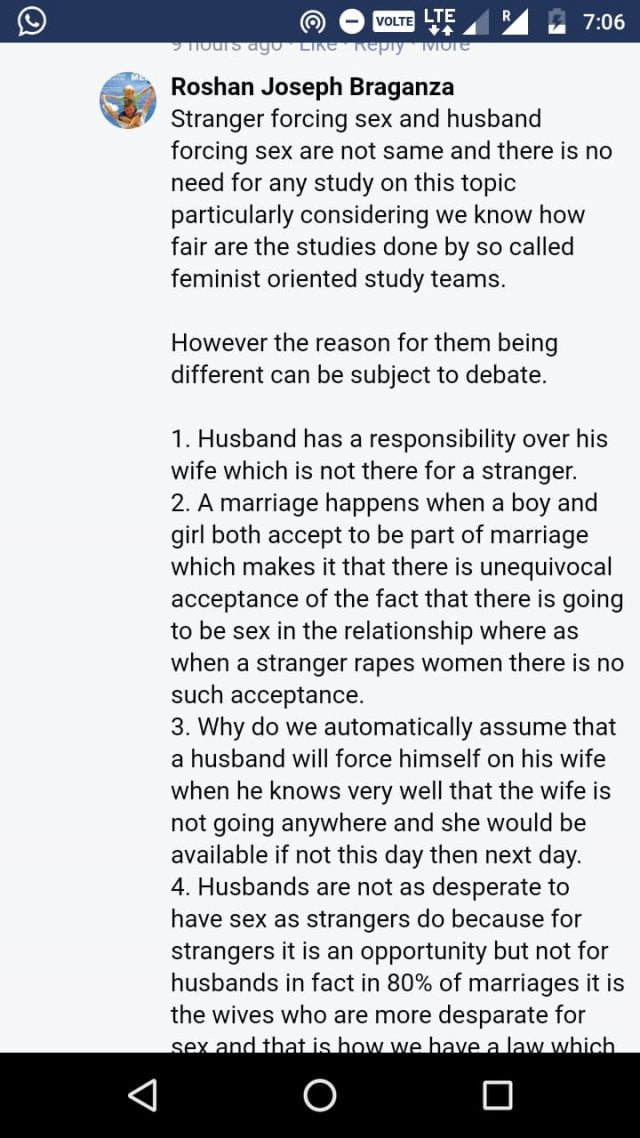 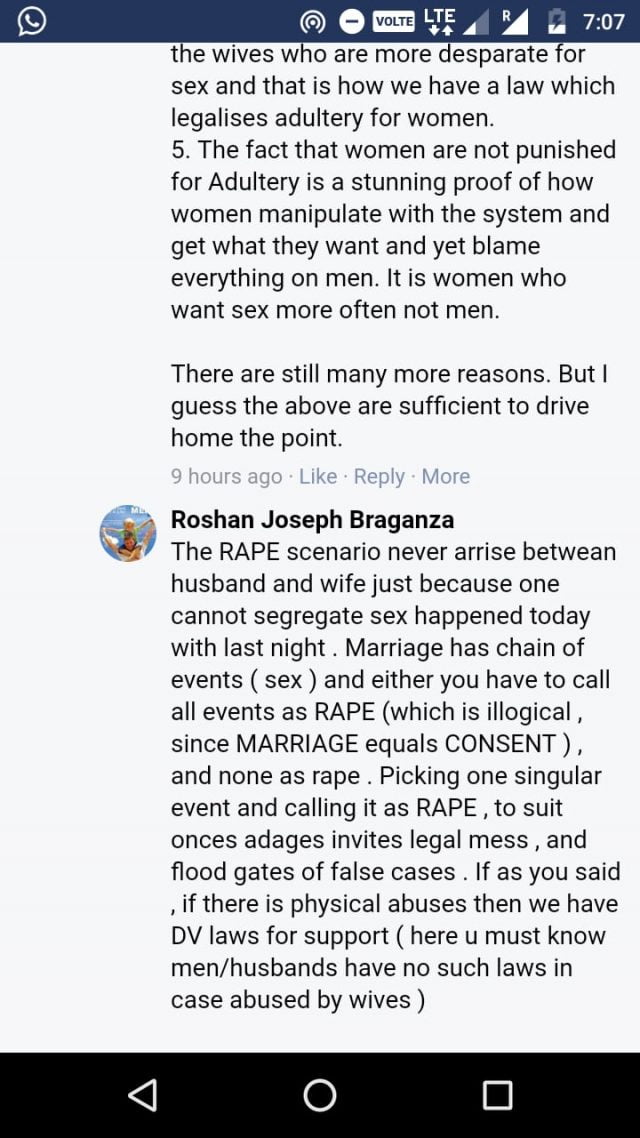 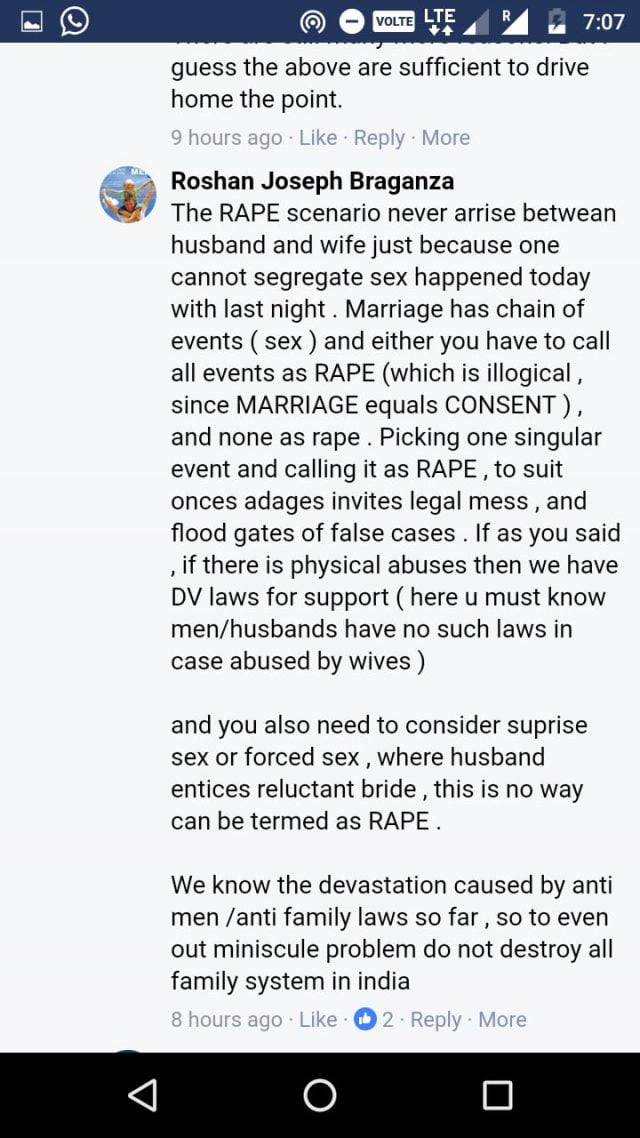 One man came in support of my argument and condemned the two guys who commented before this while explaining to them the concept of ‘consent’. He clearly quoted, “Love does not mean sex.” Framing it better, I can interpret it to mean that one does not owe sex to you if you are married to them or you love them.

Although I do not appreciate the language this person used to back my argument because it defeated the entire point of respecting someone else’s position.

Sometime later, these two camps gave each other threats of violence and used horribly inappropriate language for each other.

Interestingly, some third person in between posed a question for me about my marital status.

Because my marital status will determine my opinion about rape.

Indeed! If I have given in to the sacred institution of marriage then I will worship my husband, irrespective of the fact that he treats me like shit.

I refused to tell him but he insisted on knowing it over and over again. This person highlighted that he asked, “Cause a lot of people who are unmarried are the ones crying about ‘Marital rape’.” 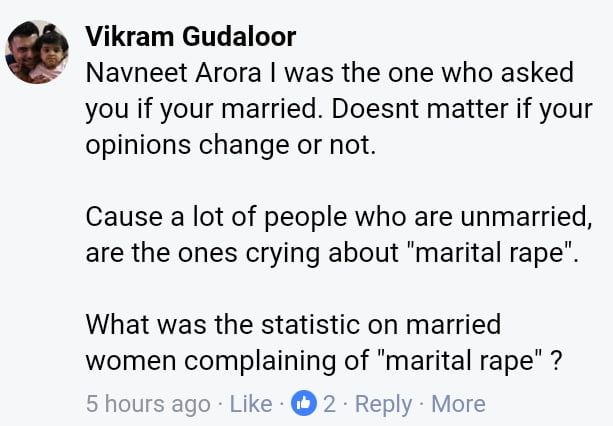 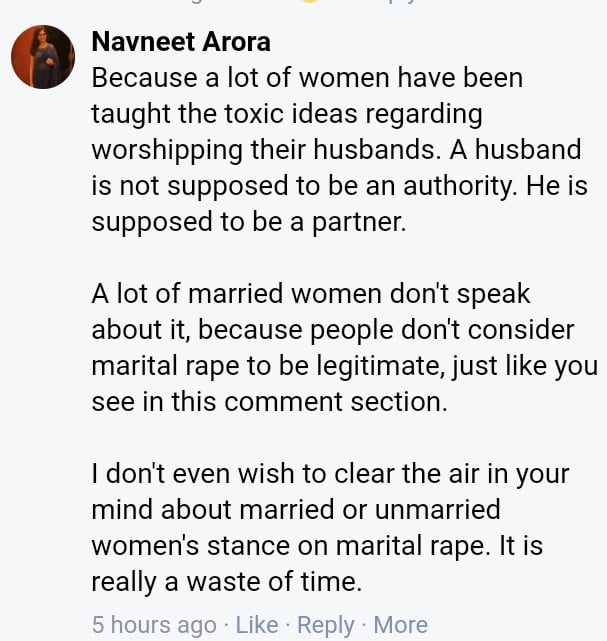 At this point, the first person whose comment had been shared by Sorabh Pant, jumped into the argument and advised me to go back to school (in capital letters) because I thought that consent is required for ‘her duties’.

Here, he enlightened me by saying that ‘forcing’ after marriage is ‘NOT’ rape.

Fellow number 2 came back in the game and said, “If a wife wants to worship her husband, what’s your problem. I think it’s not your business to poke nose everywhere.”

I tried to leave the discussion there because I knew that I am banging my head against a wall. I tried ending the argument by saying I won’t be convinced with the sh*t he is trying to convey. But he did not stop. The knowledge these people have I tell you, is never-ending. He enlightened me by saying that not once has he met a woman who accuses her husband of rape, however, he has seen a lot of women complaining that their husband isn’t interested in them. As if it is something to be proud of.

We men don’t even bother looking at our wives, huh!

The discussion went on for really long where I was abused, called names like ‘feminazi’ and ‘gold digger’.  Not that I expected anything different from such people.

But this altercation reminded me of the fact that making our society understand that a woman has the right over her body is not an easy job.

Here I was thinking, that our society is making some progress. But nah!

This society is inherently misogynist and refuses to recognise a woman (a wife specifically) as a person who has a life and existence of her own.

I was told that only when a woman earns can she complain of rape but when a man is ‘providing her protection’, ‘feeding her’ and ‘offering finances’, she has no right to call him out for rape. In short, you pay her and she gives you sex as and when required. If you don’t, only then can she refuse sex to you.

Basically, you pay your wife for sex.

TRY AND DIGEST HOW DISTURBING THIS IDEA IS! 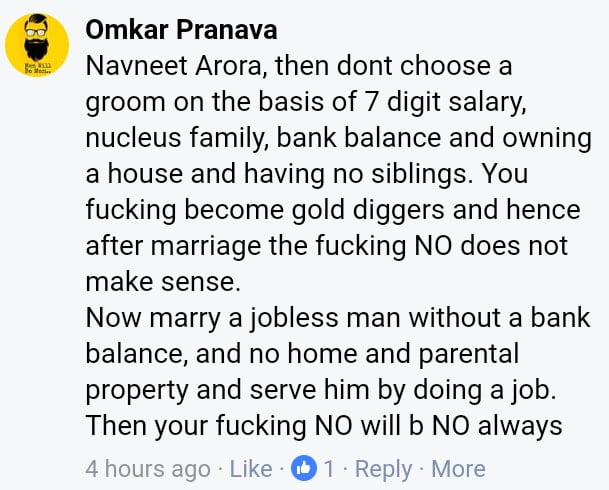 The discussion is continuing even now as I write this article where people are teaching each other the duties of a ‘real wife’.

The entire altercation is an encapsulation of the twisted ideas our society holds about marital rape and the status of women in general.

And you wonder why we need feminism?

But there is a lot that I gained from this discussion. I understood what a ‘good marriage’ means. Who is a ‘good wife’?

Since I am not married, I will never know the meaning of ‘sacrificing oneself for their partner’ and by ‘oneself’, I mean the woman of course. 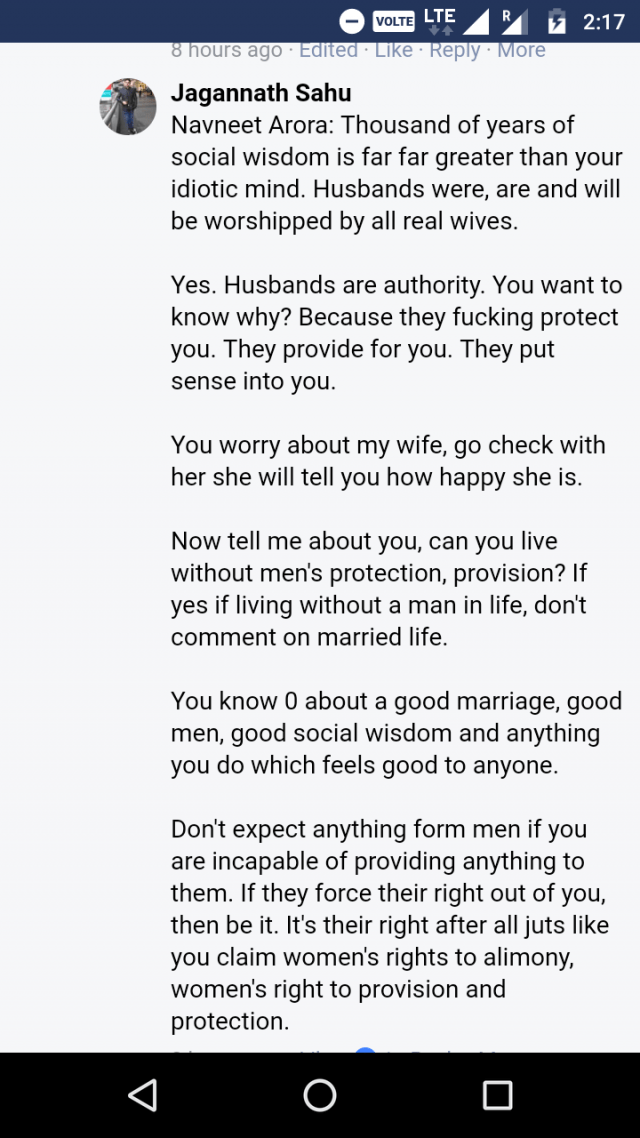 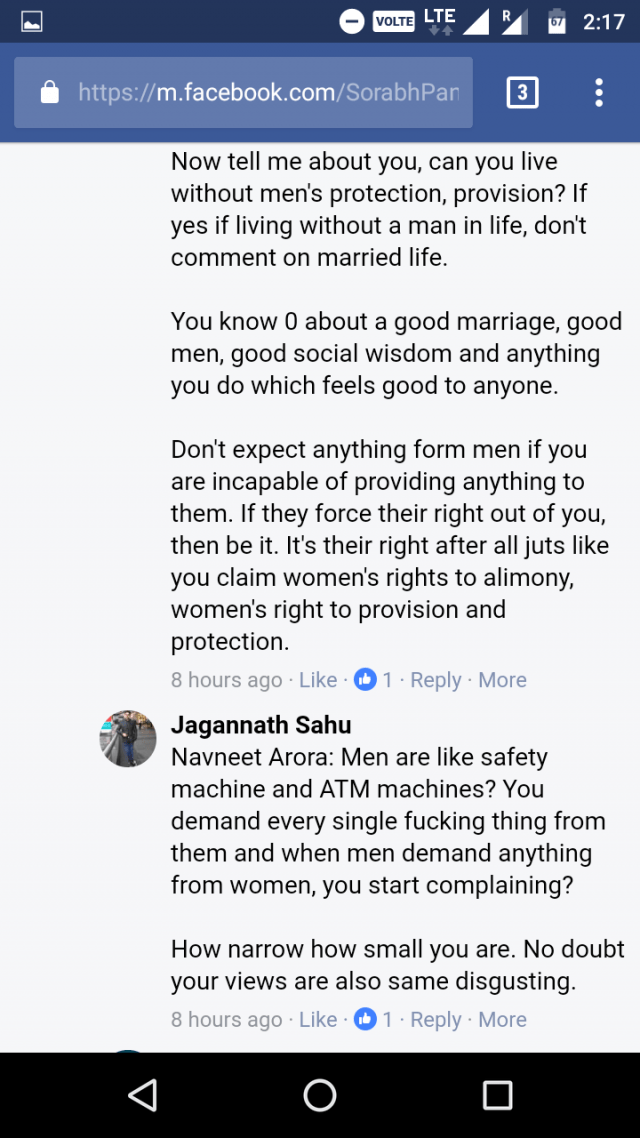 I know you are thinking that I should have left the fight in the comment section, people are idiots and I should ignore such people (which I mostly do).

But what bothered me to my core today is that these are young men who are going to get married some or the other day and some of them are married already and have daughters.

I wish this reaches their wives and daughters. I wish this spreads far and wide for everyone to see.

We still live in this mess. We are still stuck in the ideologies created a thousand years ago.

Now tell me whether our society has progressed or not?

Tell me that I need to be a ‘good wife’?

Tell me I need to ‘discharge my duties to my husband’ by providing him sex that he pays me for.

But don’t take me wrong, this fight did not demoralise me. It made my will to fight even stronger.

Their patriarchy will be directly proportional to my feminism!

P.S. There were a lot of things said on that comment thread that I couldn’t share because of the use of inappropriate language.