Home Sports Northeastern Athletes Make India Proud But Will We Go Back To Calling... 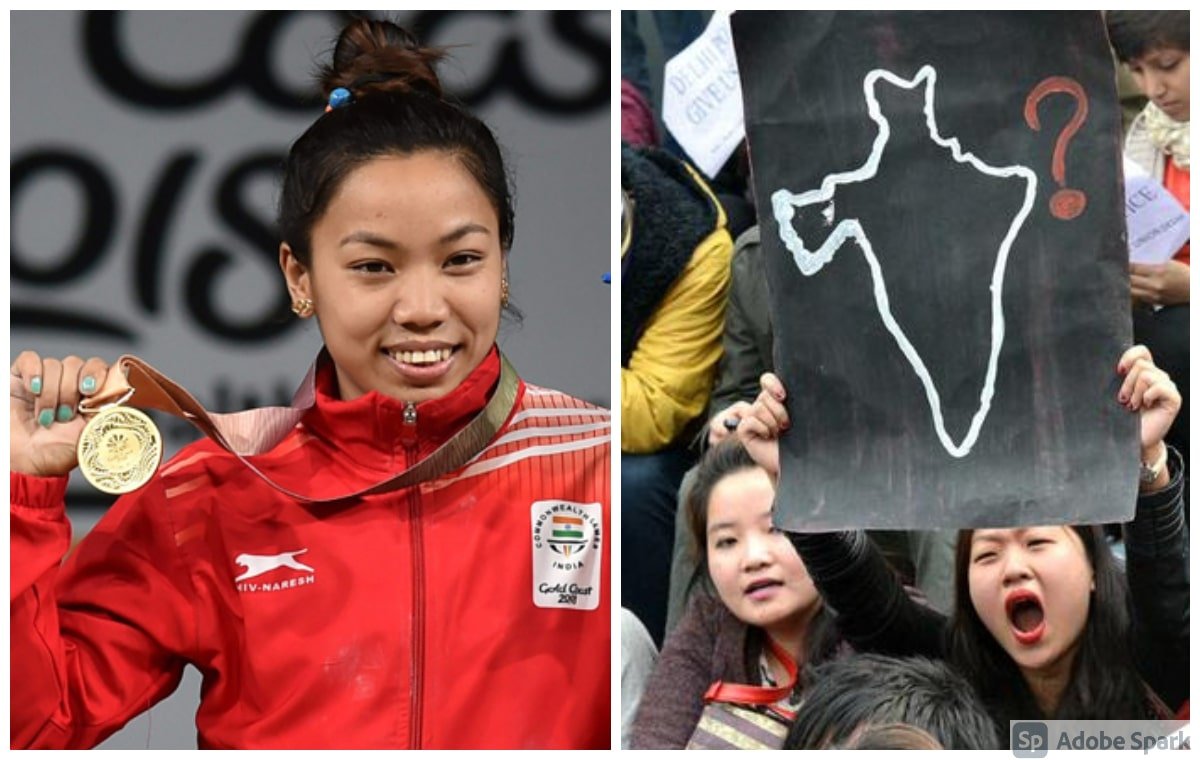 As Mirabai Chanu raised the bar for Indian Olympiads, the entirety of the Indian hinterland joined hands to celebrate her win with enormous oomph.

It was the first time that India had secured a medal in weightlifting, and an Indian had showcased her strength in front of the entire world. The lady from Mizoram brought Northeastern India to the limelight again and the Indian hinterland was reminded again of the existence of a certain state called Mizoram.

To be fair, mainland Indians have an extremely alarming track record of forgetting Northeast India in its entirety. Most instances account for the Northeasterns being referred to as Chinese.

Most still get beaten up in the streets because ‘they look Chinese.’ These thoughts attain a mortuary period every four years when the Mary Koms and Mirabai Chanus raise India’s flag at the Olympics. It is only fair to venture further into the depths of this state of mind that inhibits all mainland Indians.

As Mary Kom bowed out of this year’s Olympics by a whisker losing out to Colombia’s Ingrit Valencia with a scoreline of 3-2, the entirety of India stood on its feet in awe of the woman’s perseverance.

Kom, affectionately revered as Magnificent Mary, had created milestones upon milestones in India’s history in boxing. Being the first Indian woman to come out with a medal in the games in her category in boxing.

Prior to the games of 2012, she had already made her mark felt in the international sphere as well, with five Amateur Boxing championship titles and medals in six other world Championships.

However, it is not only Kom who has made the world take note of India in a sport that is not cricket. Northeastern athletes have always been the face of Indian sportsmanship in a wide array of sports.

This year’s Olympics was proof enough as to how beautifully adorned the Northeast is with its athletes as Mirabai Chanu secured India’s first-ever medal in the lightweight weightlifting category.

Weighing a measly 49 kg, she reportedly lifted a total of 202 kg to secure India’s first and only medal (till now). She also holds the national record of having lifted 198 kg in the Weightlifting World Championship in 2017, which enabled her to secure the gold medal in the competition.

The list of awe-inspiring northeastern athletes only keeps increasing but it would be a disservice to the Seven Sisters if we excluded the name of Kunjarani Devi. Kunjarani Devi is the idol of Chanu and that in itself should be an introduction enough into how significant her presence in the field of sports has been.

Devi is regarded as one of the best weightlifters not just in India but the world. She has won approximately 50 world and national titles. It is only fair to state that she has been a juggernaut in the field of weightlifting as the numbers do not lie, and to state that the numbers are amazing would be an understatement.

Throughout her career, she has secured 3 gold, 31 silver and 12 bronze medals in international tourneys. She was also named as one of the top 100 greats of all time by the International Weightlifting Federation. These statistics only go to prove her hold upon the weightlifting fraternity around the world.

Also Read: In Pics: LGBTQ+ Players Who Have Won Medals At The 2020 Tokyo Olympics

Athletes such as Bhaichung Bhutia have also made the entirety of the world take note of India. However, having football as one of the major sports played in India, most of us are already aware of the extent of Bhutia’s significance in both international and national spheres.

However, what many won’t be aware of is something that has nought to do with sports. He was the first Indian to boycott the Olympic torch relay as he was solicited to be the one carrying the flame for India. The Olympics, being held in China, witnessed the boycott as Bhutia protested against the Chinese occupation of Tibet and demanded independence.

You Stay Chinese No Matter The Medals You Win

Delhi, the capital city-state of India and one of the most colorful places one can visit in their lifetimes. The vibrance, mirth and obvious anger of the place almost always make you feel at home.

The joy of being a part of a culture such as Delhi’s has always been a dream of many people in their lifetime. Unfortunately, this dream only fulfills itself if you hail from the mainland but if you are from the northeast, the scenario becomes a tad different.

The COVID pandemic led to a series of such instances in Delhi wherein numerous northeast Indians faced the brunt of having Mongolian traits from their apparent Indian brothers and sisters.

2020, the year our world reverberated with the massive shocks of the coronavirus, recorded numerous incidents of Northeast Indians being subjected to an ‘us vs them’ narrative.

As stated about Delhi, the previous year, an incident of a Manipuri woman being spat on by a Delhiite with the calls of ‘corona’ echoing, had made the entire country take note of the racial discrimination that is prevalent in our country.

However, as they say, Indians have the conscience and memory of a goldfish. The entire scenario was forgotten about and the same calls of ‘Chinese’, ‘ch**ki’, ‘momo’ and ‘corona’ flooded the streets. The metropolitan cities of Mumbai, Delhi, Pune, Chennai, Hyderabad and Bengaluru, have recorded the most instances of racial abuse and discrimination against Northeast Indians.

It is only fair to state that the states exist when we want them to exist, viz-a-viz, during the Olympics. As Ankita Konwar tweeted recently;

“If you’re from Northeast India, you can become an Indian ONLY when you win a medal for the country. Otherwise we are known as ‘chinky’ ‘Chinese’ ‘Nepali’ or a new addition ‘corona’. India is not just infested with casteism but racism too. Speaking from my experience. #Hypocrites.”