Lone lost both of his arms in an unfortunate incident when he was just eight years old.

It was on 21 September 1997, when he went to deliver lunch at his family-owned sawmill. There, he met with an accident when his jacket got caught in the sawmill and both of his arms were chopped off.

Lone recalls the grave incident and says “My father and elder brother were working at the sawmill. They were having lunch with the other workers and had left the sawmill running. My jacket got caught in it, and my arms were chopped off. The local army unit came to my rescue, and shifted me to a hospital in their vehicle.”

This incident changed his life forever and it took him about three years to recover properly.

Fighting Against All Odds

According to Lone, his grandmother, Fazi played an indispensable role in encouraging him to complete his schooling even after being absent for three years.

When Lone’s teachers at school thought that it’s futile for him to study, his grandmother came forward to convince them and he was permitted to continue his studies.

Lone’s grandmother devoted the rest of her life to him and became his greatest support.

Lone says “Her death made me learn and do everything on my own. I shave, and manage all my daily chores while using my feet and chin.”

Read More: From Polio To COVID Vaccine: How India Went From Getting Aid To Giving Aid

An Indomitable Spirit And Passion For Cricket

Lone has been passionate about cricket since childhood and has made himself capable of playing without letting any misfortune come in the way of his dreams.

While he was pursuing his graduation from a Government Degree College, Bijbehara, a teacher discovered his cricketing talent and introduced him to para cricket.

Lone, with his hard work and perseverance, became the captain of the J&K para cricket team in 2013. 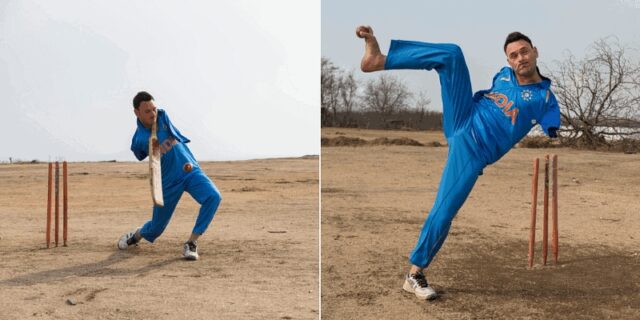 “With a lot of determination, I started practicing the game, and after many tries, I succeeded in holding the bat and throwing the ball,” he says.

With an indomitable spirit and willpower, Lone has played cricket in Delhi, Lucknow, Kerala, Mumbai, and Hyderabad.

Recently, he also got the opportunity to play at the Dubai Premier League in Sharjah, United Arab Emirates (UAE).

But, this is not the end for this 32-year-old determined sportsman who aspires to be a part of the national cricket team and bring laurels for the country.

Stop Getting Surprised When You Meet A Cricket Fangirl Like Me