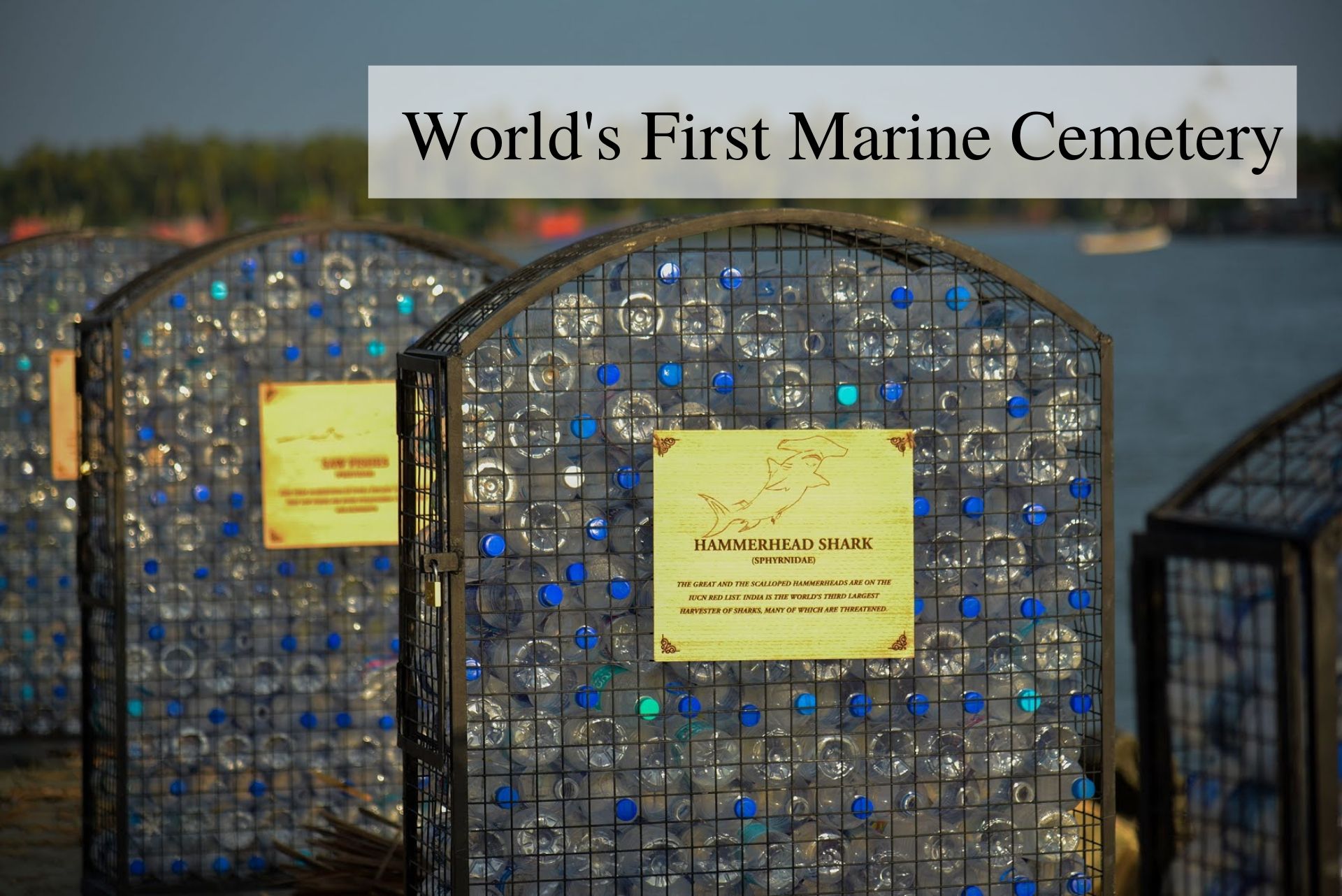 The damage that we have done to our seas is alarming and to say that we have killed our water bodies is only an understatement. This idea was symbolically captured by a ‘Marine Cemetery’ that was built in Kerala.

Located on the seashores of Beypore, Kozhikode, the world’s first Marine Cemetery was an initiative brought about by Jellyfish Watersports accompanied by the drive of activist Aakash Ranison.

Aakash’s methods to drive home the message of environmental conservation are thought-provoking and creative. This was the stimulus for Jellyfish Watersports to approach him in order to create something for the Chaliyar River in Kozhikode.

Thus, the idea of the unconventional tombstones was born. Now, the beach in Beypore houses 9 gravestone-like markers, each constructed as iron-frames containing neatly arranged plastic bottles.

Each of these 9 iron-frames pays tribute to one critically endangered marine species, as described by the International Union for Conservation of Nature (IUCN).

While 8 of the markers stand 4 feet tall, the one dedicated to Miss Kerala (Sahyadri denisonii) is 6 feet in height.

The Drive Behind The Project

Kerala’s economy is hugely dependent on marine life which sadly faces the brunt of man’s polluting streak. A state that thrives on its fishing industry is also home to rivers that are overflowing with single-use plastics.

This has caused several problems to the natural ecosystems of the land, affecting rivers like the Chaliyar, wherein 9 marine species are facing the threat of extinction.

The pioneers of the Marine Cemetery noted that tourism has the power to bring about awareness of these issues. The more aware people are, the more they’d care and work toward reversing this crisis.

Beypore Beach Cleanup: Initiative by @jellyfishwatersport & Driven by Aakash Ranison • I never knew what I want to do in life but always knew one thing that I only wanna do the things what makes me happy and surely big things. • A year ago I didn’t think I’ll also do a beach clean up but last Sunday[10th Nov’19] got the opportunity to do that too. • And I didn’t do it alone I had 80+ super amazing people along with me, by my side with the equal amount of dedication to save the beach they love. • On that day 80+ people in 4 hours collected 800+ kilograms of solid waste from the Beypore Beach. DAMN. • Thanks to @jellyfishwatersport & our creative team for putting the best efforts and making it a big success. • Today it’s not just an idea, today it’s “The Change” and I know with the support of the loving people of Calicut we’ll be able to get our beautiful beaches back.

Thus Aakash, along with Jellyfish Watersports came up with a kayaking clean-up project wherein participants were told to pick up whatever waste they found along the way. Further, a clean-up drive organised on Beypore Beach got participants collecting a ghastly 800 kg of plastic waste.

Even though the municipality recycled most of that waste, about 2,000 single-use plastic bottles remained. This marked the beginning of the cemetery.

No More Can We Turn A Blind Eye

Our environment is crying, and our seas are collecting its tears. We can no more turn our backs on this grave issue.

The makers of the world’s first Marine Cemetery wanted to shock people with what could actually be the near future – a future where plastic wastes replace the breath of the ocean. This way, no one could ignore the catastrophe that we have given birth to.

Change should begin from us, and it must be immediate. The simple act of giving up single-use plastics can become the first step towards that change.

Here’s to hoping that we wouldn’t see the day when this symbolic cemetery becomes a literal graveyard.