Bill Hybels said, “We all have strengths, weaknesses and blind spots. In fact, an average person has 3.4 blind spots.” It’s necessary that one tries to locate them, think about them and most importantly perceive them, for it’s rightly said that “Our perception could either be our path to nirvana or an invisible cage that bottles us up.”

TEDxShivNadarUniversity, keeping those ‘Blindspots’ as a central theme organised their annual conference on 17th November 2019. The eleven speakers who conveyed their ‘Ideas worth spreading’ were carefully hand-picked and curated by the Organising Committee of Students.

TEDxShivNadarUniversity, also made sure, that they’re doing their bit, by coming up with 90% sustainable delegate kits, and planters for the attendees.

The conference was inaugurated by Mrs. Anubha Bali, The Director of Career Development Centre at Shiv Nadar University, which followed by the first performance of the day by Mr. Ishaan Chawdhary, who performed slam poetry and swayed away the audience with his words and expressions.

The first speaker, Ms. Mahima Gujral, CEO of Sui, talked about sustainable fashion being the need of the hour, and her story of coming to live a better life than before. This was followed by an extremely moving talk by Dr. Chingmak Chang, who talked about building communities that thrive on institutions as well.

TEDxShivNadarUniversity, outdid themselves from their previously organised editions of the conference and put themselves on the map by flying in, a speaker from Dallas, United States – Mrs. Pradeepa Narayanswamy, a fertility coach who talked about her own story of infertility and moved the audience to tears. She talked about how experiences have made her strong, in life and how she has developed into a ‘new-self’. 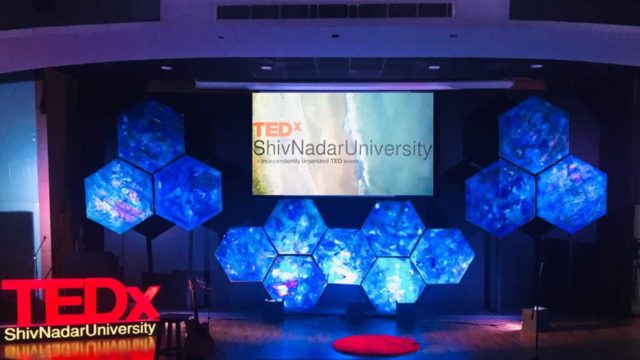 This talk was follwed by a short refreshment break, after which Mr. Sharath Jeevan, Founder of STIR education, who also flew in from the states, talked about reviving interest in children by modifying the school curriculum, and letting them tackle things out of sheer curiosity.

His talk was followed by Mr. Manish Gupta’s talk about the importance of taking risks in investments. Having several world records against his name, apart from being a business coach, his words really captivated the audience.

A TED talk was screened following which, Ms. Radhika Mittal, Founder of Super School India, talked about making sex education accessible and conducted fun – activity that was a huge eye opener at the same time.

After the screening of another TED talk, Mr. Maneish Paul, famous TV show host, delivered his talk about cruising through an unplanned life and how he came up with new formats of television hosting that was non-existent before.

After a lunch break, the audience was mesmerised by the performance delivered by Chizai- music band. The highlight of the performance was that a song performed by them was also interpreted in sign language.

The band received a standing ovation from the audience as well. The second performance of the day was followed by a talk by Mrs. Manisha Lath Gupta, who talked about her story, in permaculture farming and how she developed a sustainable farm from scratch.

The closing speaker of the day was Mr. Manit Ramaiya, who is a  concept developer at Saint Gobain ECOPHON. He talked about the silent Problems of Noise, as to how acoustics of indoors are essential. The last performance of the day was by Mr. Bharat Sharma, from Bhoomika Creative Dance Centre. He gave a tribute to Mahtama Gandhi.

The conference closed by a vote of thanks, and appreciating and acknowledging the efforts of the organising committee who worked day and night to make the conference a huge success, which it clearly turned out to be.

The entire day, was filled with many things to learn, and retrospect upon. Several activities were planned for the attendees, which made them think about their blindspots. Every speaker, in their talk mentioned about the little things that we tend to miss out in daily life, and finally talked about those blindspots that they’ll like to emit.

The audience took home the idea, of being able to notice the gaps in the pictures and static in the signal. Yet another successful event came to an end, but these ideas will continue to flow across and change the world for better.

ED was proud to be their blog partner.