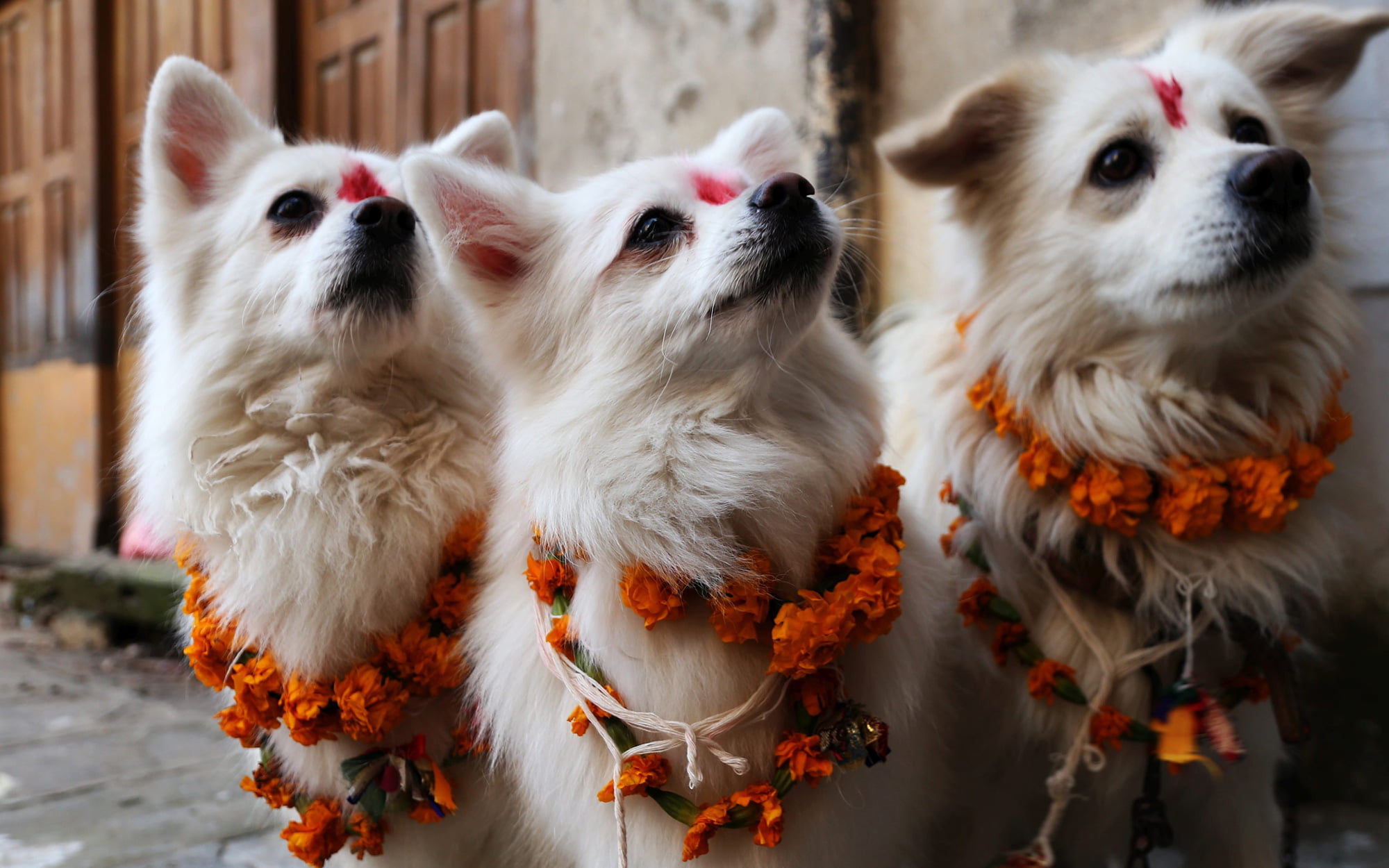 Today marks the first day of Deepawali and you can see people all around you gearing up for the occasion.

Its rituals vary in different parts of India, while in some locations people are shopping for gold to mark ‘Dhanteras’, others like the states of Sikkim, Assam, Uttarakhand, etc are celebrating ‘Kaag Tihar’.

Diwali is comparable to the ‘Tihar’ festival in Nepal. It is the biggest Nepali festival after ‘Dashain’ (Dussehra). Similar to how we worship cows for the ‘Govardhan Pooja’, Tihar requires worshipping of crows, ravens, dogs, and cows over the course of 5 days.

This festival is now crossing international borders and is no longer limited to just Hinduism.

What Is Kukur Tihar?

‘Kukur’ means dogs, and the second day of the Tihar festival is dedicated to them. The Newars call it ‘Khicha -Puja’. This might be the best day to be a dog or a dog-lover.

Man’s four-legged friend is honored and celebrated by adorning it with garlands of flowers (usually marigold) and ‘Tilaks’. Afterward, the furry animals receive their favorite delicious treats and the humans acknowledge the profound connection that has built between them.

Myths Behind Sacredness Of Dogs

The most popular myth is the one found in the epic ‘Mahabharata’. According to it, the Pandavas were accompanied by a dog in their final journey before their ascent to heaven.

In the process, Yudhishtira loses his brothers and wife but the dog never leaves his side. Such was the bond between the two that when the time came he refused to abandon his faithful friend at the gate.

The dog turns out to be ‘Dharam Devta’ in disguise who commended him for not leaving a helpless creature.

‘Yamraj’, the god of death has 2 watchdogs who are the gatekeepers of hell. Lord Shiva’s avatar ‘Bhairava’ uses a dog as his ‘Vahana’. ‘Rigveda’ too mentions Lord Indra seeking the help of ‘Samsara’, mother of dogs, to find his stolen cattle.

Hence, dogs’ virtue of loyalty is imbibed in our brains and is the reason they’re venerated on ‘Kukur Tihar’. This is why I like mythology. It has a way of making the man respect, and care for people and things around him that he might otherwise consider inferior.

Condition Of Stray Dogs In India

We have all come across those terrible videos on Facebook brimming with animal cruelty. Teasing disheveled stray dogs is all too common in India. Just today my mother got upset over a dog taking a dump in front of our house, and I’ll admit I’m quite afraid of them too.

However, I realize the reason for their behavior is hunger and diseases. And that’s why this festival sparks such optimism in me because on Kukur Tihar all the dogs whether they’re stray or a home-owned pet, are attended to.

Dogs’ favorite part of the celebration is to feast on various goodies ranging from fruit and cookies to eggs, milk, cheese, meat, and high-quality dog food.

For the last couple of years, the Mexican activists are becoming inspired by the festival.

Martha Dau, an organizer for the celebration last year at Mexico City’s Revolution Square and in Puerto Vallarta, believes that “it is important to raise awareness among the population about the respect we owe dogs”, and ‘Kukur Tihar’ is making it possible.

Other organizations such as Protección del Perro Callejero are also making the festival a means to raise awareness about animal rights, appreciation of the poor creatures, and the importance of rescuing stray dogs.

Anemio Maya of the Organización Properro said: “We hope that this celebration will spread throughout Mexico to raise awareness about the abandonment suffered by dogs and create a feeling of gratitude that is so necessary.”

People also observe a minute of silence for their pets who have died. They are encouraged to share their memories as it will make more people grasp that every species is important and worth saving.

Mexicans have adopted to celebrate an exotic festival because it helps them in their noble cause, why can’t we do the same in other parts of India?

Tomorrow, when you wake up to celebrate ‘Roop Chaudas’, and prepare various snacks, be mindful of the miserable creatures in your streets. If you can’t adorn them with a garland offer them a chapati at least.

It may be your repentance against the crackers you’ll burn in the evening which troubles patients, elderly people, and these dogs. Help them fill their bellies with grains instead of garbage.

Will you celebrate and provide food to dogs for the occasion of ‘Kukur Tihar’?