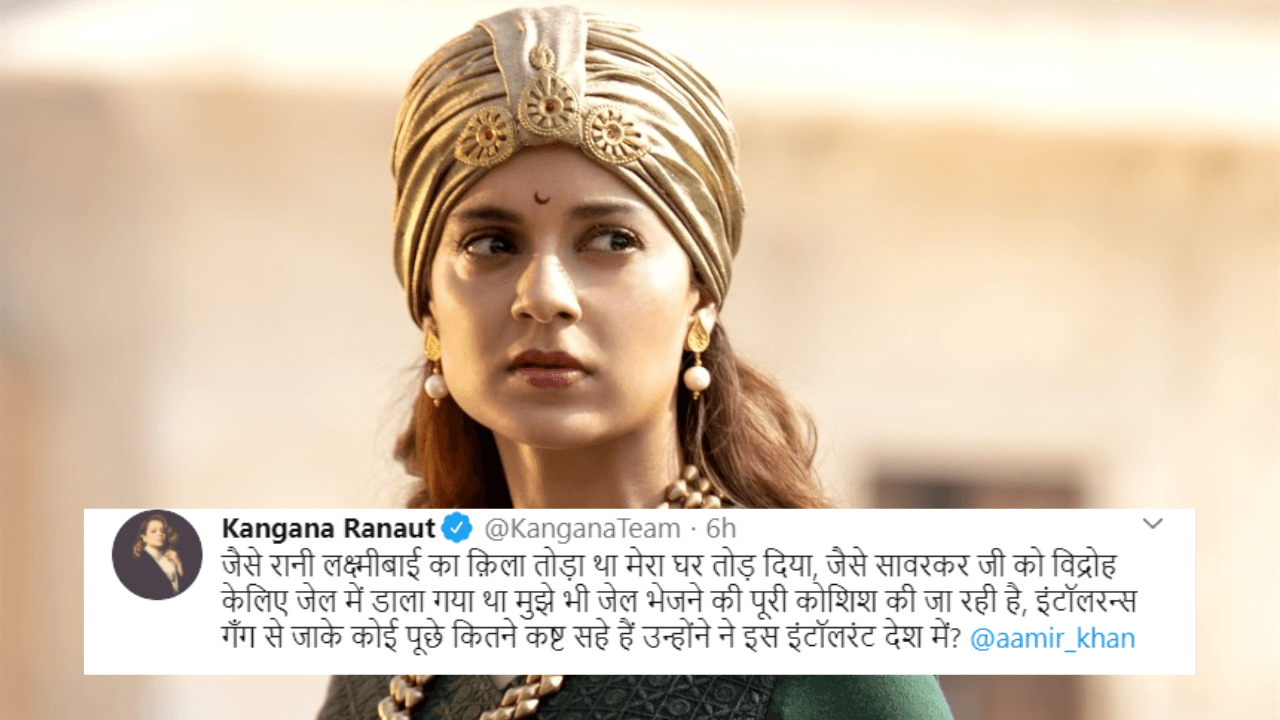 A lawyer based in Mumbai filed a criminal complaint against actor Kangana Ranaut on 22nd October 2020, Thursday, before the metropolitan magistrate court in Andheri.

This complaint was a consequence of Kangana’s “malicious” tweet against the judiciary after the Bandra Metropolitan Magistrate’s court ordered the police to investigate a complaint filed by a Bollywood casting director and fitness trainer, Munawwar Ali Sayyed. 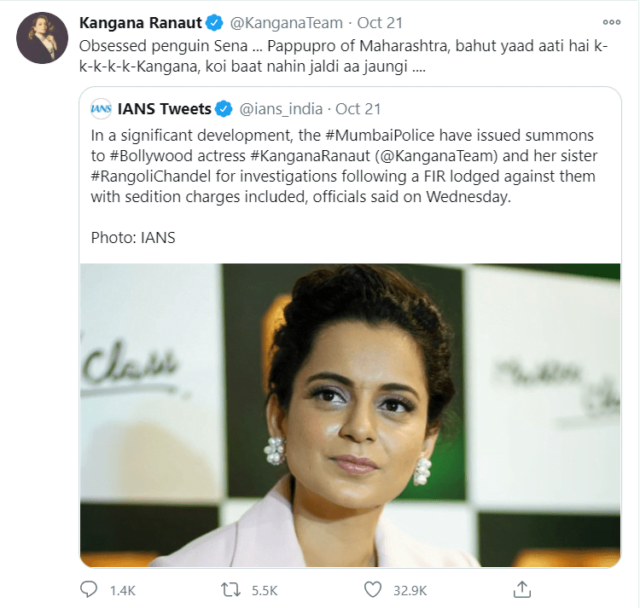 Even the director’s complaint was in relation to Ranaut’s and her sister Rangoli Chandel’s tweets and other statements and was concerned with IPC sections 124-A (sedition), 153A (promoting enmity between different groups on grounds of religion, race, etc) and 295A (deliberate acts hurting religious sentiments).

Advocate and the latest complainant, Ali Kaashif Khan Deshmukh said that the actor had “defamed our country, its police, authorised government bodies, executive machineries all being established by law in India”.

The complaint states, “Following the Bandra court’s order to the police to register a First Information Report against her, Ranaut posted malicious and defamatory tweets against the judiciary, terming it as Papu Sena”.

Deshmukh added that Ranaut has used her Twitter handle to put up statements with “malafide intentions and ulterior motives of creating an atmosphere of hatred in the country amongst different religious groups.”

“I have already filed a private complaint in the Andheri Magistrate Court against Ms.Kangana Ranaut and Ms. Rangoli Chandel dated July 27, 2020, for indulging in unlawful, illegal, and criminal acts willingly by maliciously spreading/promoting enmity between different groups on the grounds of religion and doing acts prejudicial to maintenance of harmony in the country by way of mischievously and spitefully posting frivolous, derogatory and defamatory posts with the intent to outrage religious feelings of a class by insulting its religion or religious feelings/sentiments more specifically against Islam, Muslims,” said Deshmukh.

“It is pertinent to note that every Indian citizen has got the right to freedom of speech and not the freedom of ‘hate’ speech.”

Meanwhile, a Karnataka court had also ordered an FIR against her over a tweet in which she had condemned the protests against the Centre’s farm laws.

On September 21, Kangana had tweeted, “People who spread misinformation and rumors about CAA (Citizenship Amendment Act) that caused riots are the same people who are now spreading misinformation about Farmer’s Bill and causing terror in the nation, they are terrorists”.

Kangana is in major legal trouble over her tweets.

Reacting to the cluster of complaints on her and her sister, Kangana tweeted:

The actor compared herself to Rani Laxmi Bai and Vinayak Damodar Sarvokar in a tweet. She even proceeded to tag actor Aamir Khan, taunting his silence on this matter, as he had been in the headlines over rising intolerance in the country before.

She also expressed herself by passing toxic remarks on those who protest by participating in candle marches and returning their awards and claimed that she is the one who is “fighting real fascist government”. 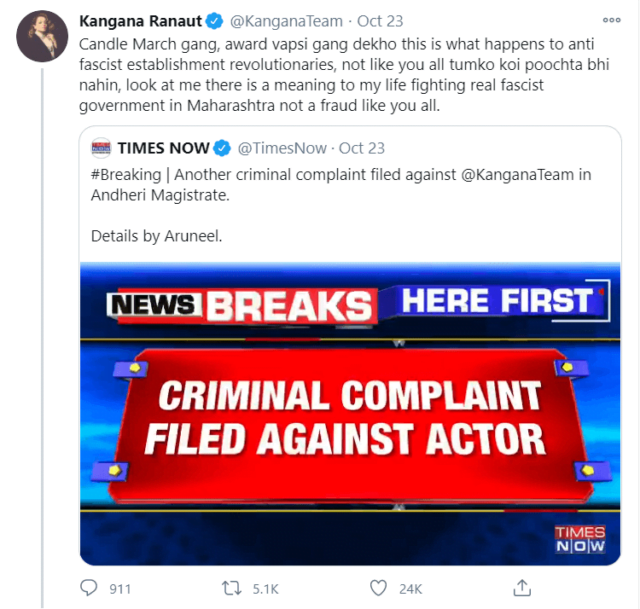 Kangana has been a topic of discussion on social media since earlier this year after she started involving herself in political issues by actively commenting on social media.

Post Sushant Singh’s death, she passed a lot of controversial statements against the entire Bollywood industry and the system of nepotism.

The situation got troublesome for her when Shiv Sena ordered to demolish her office after her PoK tweet.

After her emotional outbreaks to the criminal complaints and other general tweets on Twitter in the form of vexatious comments, the public took it upon themselves to shut her up. 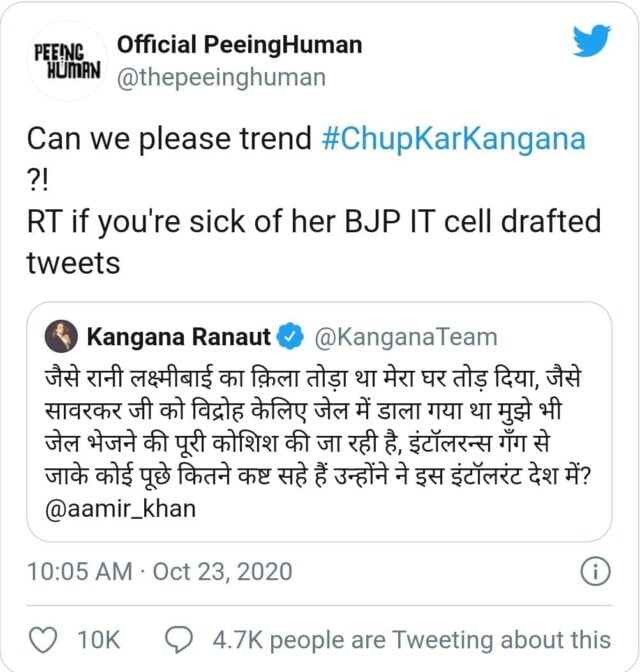 Within an hour, #ChupKarKangana was trending at sixth position on Twitter.

She compared herself to Rani Laxmi Bai and Sarvakar and the public was not having it.

People on social media even exclaimed that she was only doing all of this for a seat in Lok Sabha through BJP and suggested that BJP should just take her in soon.

Others reacted by making memes and criticizing the actor. 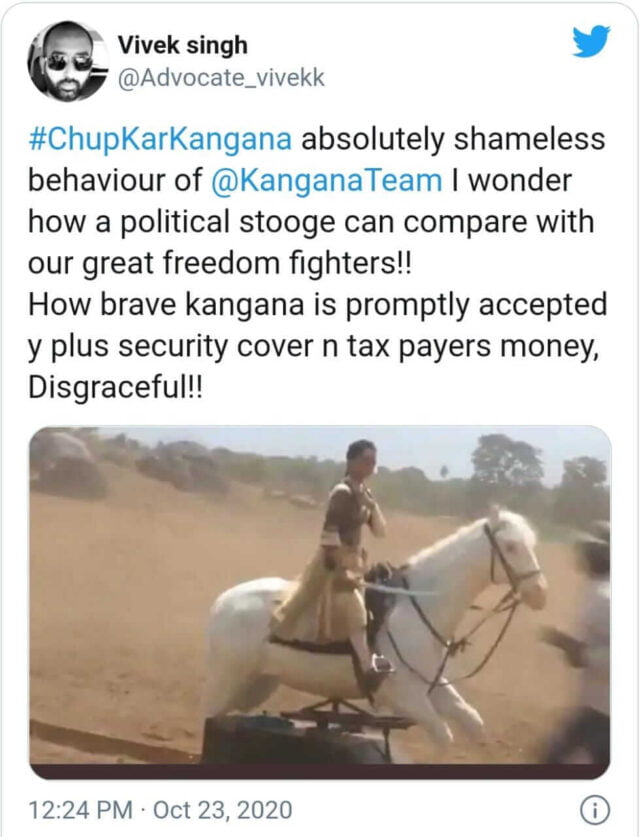 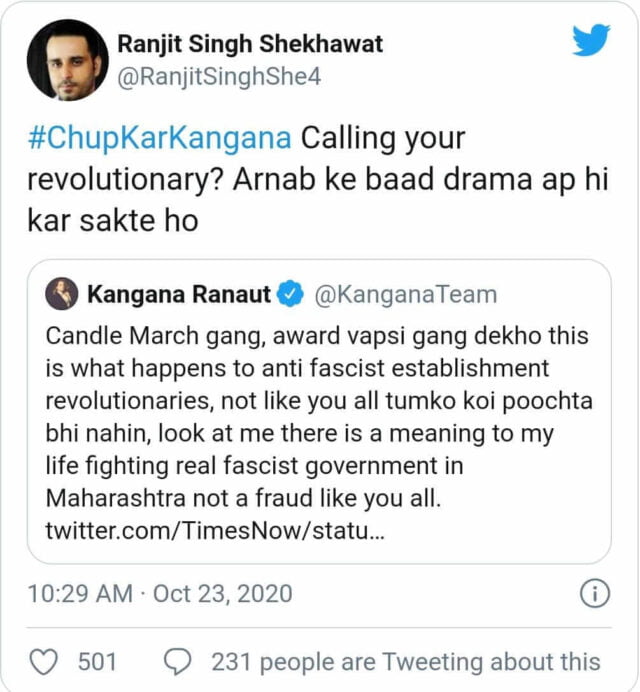 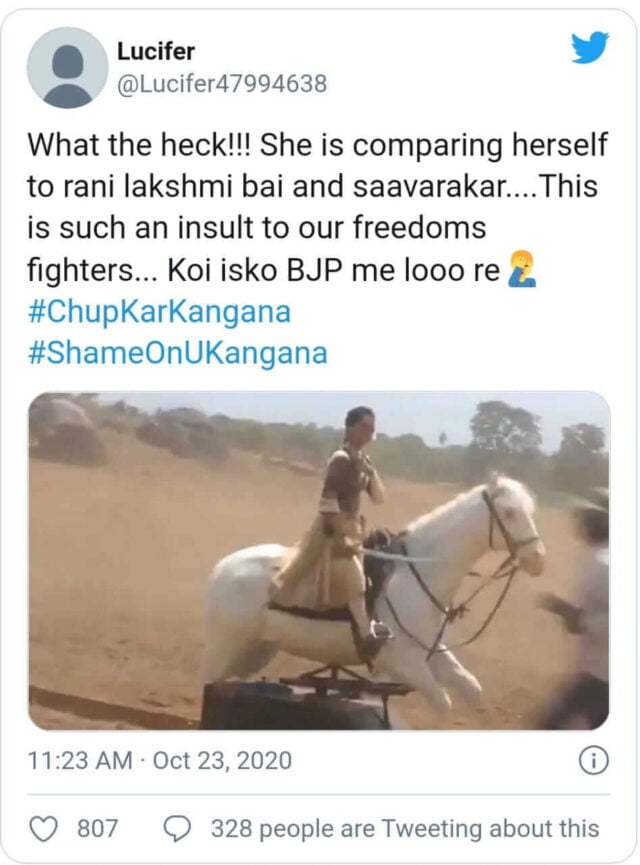 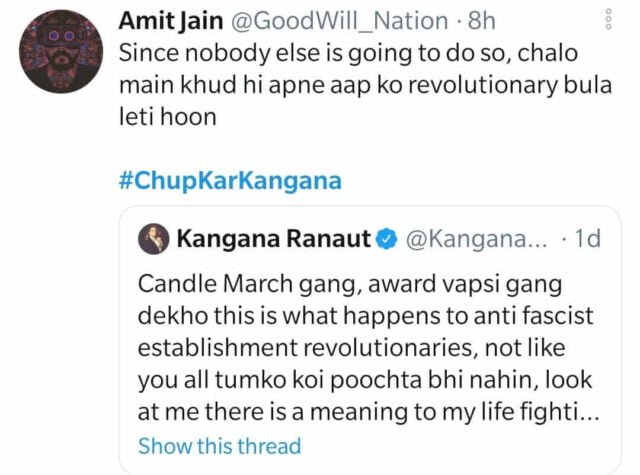 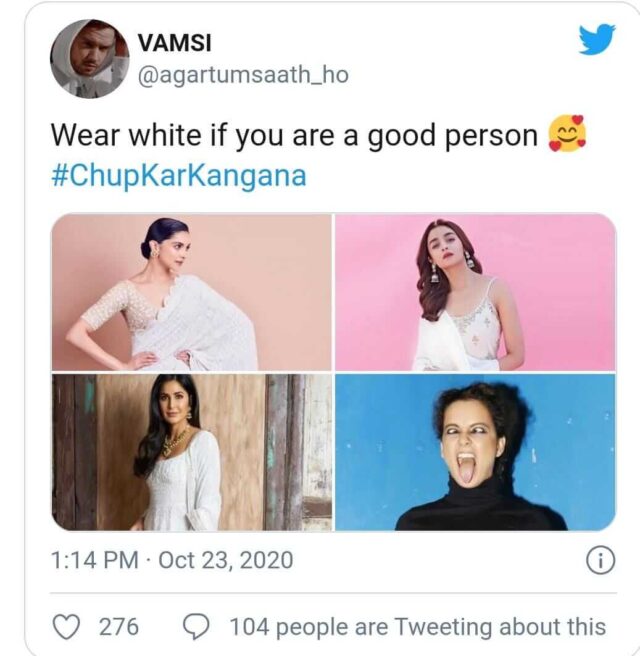 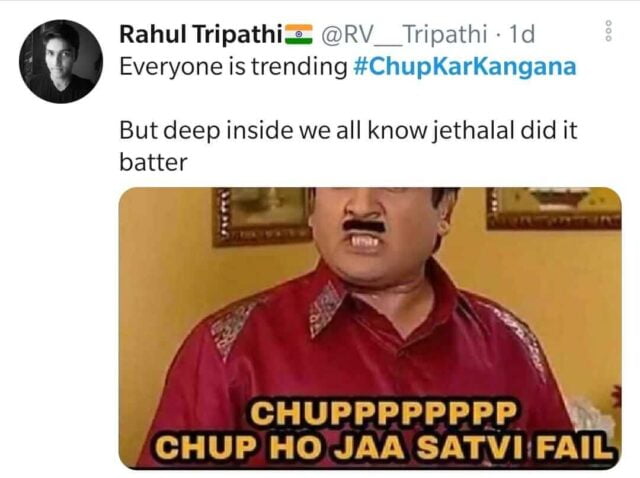 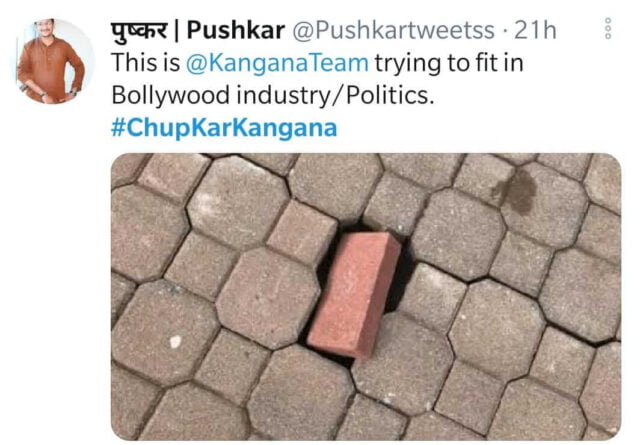 In Pics: What All Did Kangana Ranaut Expose In Her Tell All Interview With Arnab Goswami?