Many people might not know what the Super Bowl, an American sporting event is, but they would for sure know the half time performance that was all the rage yesterday.

To understand how big this event is, I would compare the Super Bowl to the World Cup cricket match in India. And it’s a big deal to many of the sports loving people of the United States of America.

But most of us just knew it from how the halftime performance that was given yesterday by Jennifer Lopez, aka J-Lo and Shakira went.

Both the pop stars performed for a combined duration of 14 minutes with some of their biggest hits.

However, more than just giving a good performance it was how the two artists showed the power of the Latin people in America and how they were just as much a citizen of the country as any other.

While Shakira’s performance had more cultural elements to it, J-Lo’s was more overtly political, or at least that is how many people are seeing it as.

Representatives of the artists have till yet not clarified if they were actually making a political statement or not, but the actions seem to be speaking loud enough.

J-Lo who is from Puerto Rican descent, towards the end of the performance came out wearing the flag of her native place. It must be observed that the Puerto Rican flag greatly resembles the official American flag. 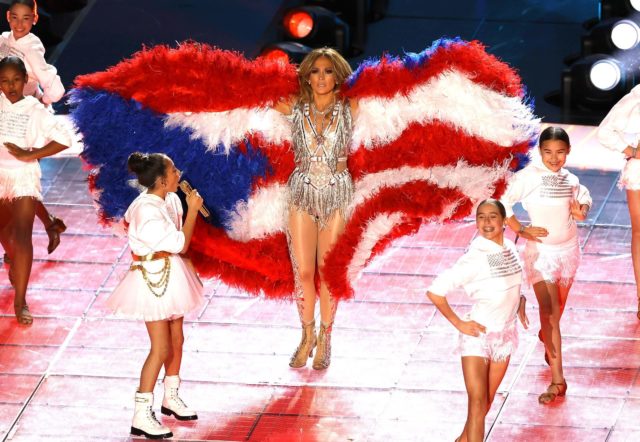 One could take this as a statement that even people from her hometown are just as American as any body else.

J-Lo’s 11 year old daughter, Emme Maribel Muñiz, also made an appearance at the stage and belted out a few lines of Bruce Springsteen’s “Born in the U.S.A.,” and her mother’s “Let’s Get Loud” songs.

J-Lo frequently during her performance cried out ‘Latinos’ and ‘Americans’ further signifying how both these are one and the same, a sentiment that not many in the US share.

In another interesting comment, a choir of children led by J-Lo’s daughter were seen sitting underneath lit-up structures that looked like cages. 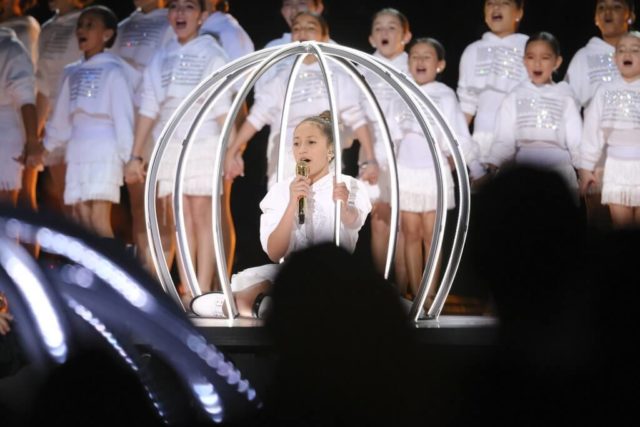 Many people thought it could be pointing at the Trump administration’s cruel immigration practice where children have been separated from their parents at the US-Mexico border and kept in detention centers.

Many people noticed this and commented on it:

J Lo and Shakira n their half time show
reminded all of us, children are still n cages.
We must never forget.
It is a humanitarian crisis to have just one child
ripped from the arms of his or mother &
put in a cage.
We must protect all children regardless of their
skin color. https://t.co/RVwTM5LZCD pic.twitter.com/bwH4jhVoOS

Hey if any of us break the law, we het separated from our kids and put into cages too!#SuperBowl2020 @Love_On70@Cptn_murica@OldSchool2A@BarbaraRedgatehttps://t.co/xMerI3WtfW

Props to Jlo, Shakira and/or the choreographer for the necessary statement with Latino children in cages singing""Born in the USA". #SuperBowl #SuperBowl #PepsiHalftime pic.twitter.com/gyQDsmXo3l

I've been saying: Puerto Rico isn't getting enough top story coverage in the news – regarding what's happening on the island with 3.4 million U.S. citizens – but wearing the flag during the Super Bowl half time show is definitely 1 way to get people talking. Now, please follow the issues.

Power Of The Latin People

Frankly, if nothing else this performance certainly showed the power of Latin people and women who are embracing their culture without shame.

JLo & Shakira’s performance was an unforgettable one and more than just gyrating hips and age defying looks, it also gave insight into their Latin talent.

Where J-Lo could have been making some political statements, Shakira on the other hand was seen uplifting her heritage and culture.

Shakira who has both Spanish and Lebanese roots was seen singing several songs in her native language instead of English. Her performance also incorporated Arab instruments like the mijwiz and derbeke and belly dancing into her routine. 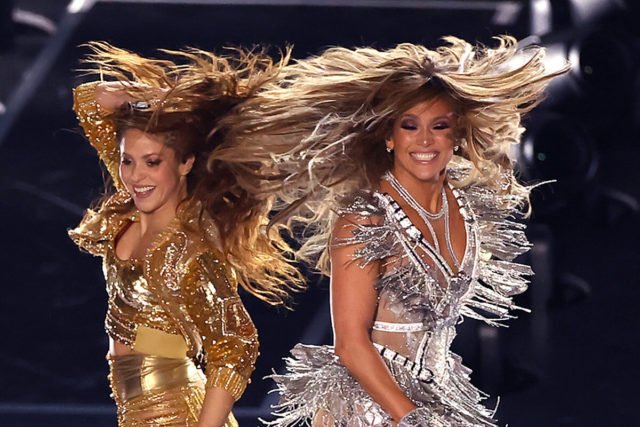 She also added the Champeta, a dance from her hometown in Barranquilla, Colombia into her performance along with a ‘tongue thing’.

Some people have come out and explained its cultural significance with some saying it is a zaghrouta, a sound that Middle Eastern and North African women often make to express joy or positive emotion and comes from her Lebanese side while others have said it comes from her Colombian side and is related to the Carnaval de Barranquilla.

"For once, an Arabic expression of utter delight, not the violent stereotypes that plague American TV and movies, was on one of our biggest national stages. And next to no one recognized it." https://t.co/XJJ9VmlB89

Chiming in because I know everyone will be making jokes about this for days — this is a popular Arab tradition, called zaghrouta, used to express joy at celebrations. In the melting pot that is Miami, you could not have picked a better Super Bowl act and this was a lovely touch. https://t.co/q1H9l8UpQ5

Frankly, it was good to see Latins being represented in such a positive way on a national level. Usually most of the news attached to them is quite grim in nature with it being about crimes, tragedies, illegal immigration and more.

Another reason this was a big moment for the Latin people of America is because this was the first time that two Latin women were the headliners for the Super Bowl halftime show.

A NY Times review of the performance said that, “Yet the halftime show was also a no-nonsense affirmation of Latin pride and cultural diversity, in a political climate where immigrants and American Latinos have been widely demonized.”