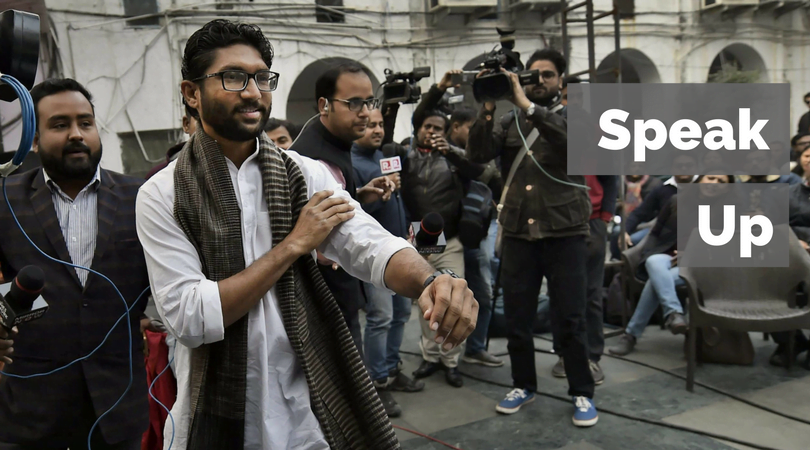 Gujarat MLA and Dalit activist Jignesh Mevani, on Tuesday, held a rally on Parliament Street in New Delhi amid dense police presence where he hit out at PM Modi and the present government on various issues, chiefly: being mere silent spectators to atrocities carried against lower caste people, the arrest of Chandrashekhar Azad and the rise in unemployment in the country.

The main attraction of the rally was Jignesh Mevani and farmer activist Akhil Gogoi.

Before the rally, Parliament street was turned into a fortress of police barricades. The mere fact that the rally wasn’t given permission by the police authorities raises the question as to why is there a sense of fear and uneasiness within the present government against the supposed rising stars of politics, stars created by the government itself. Anyhow, the focus should be shifted to the substance of the rally.

Also read: Why Bhim Army Is Making The Right Noises

Let’s look at a few statements by the student leaders at the rally:

“I am being targeted because of the way in which Hardik Patel, Alpesh Thakore, and Jignesh Mevani crushed BJP’s target of 150 seats in Gujarat and restricted them to 99 seats,” Mevani said.

What Mevani said is not rocket science or a trigonometry numerical. This style of politics is getting increasingly noticeable within the Modi government. Any person from the opposition parties is treated poorly by the government, both within the legal sphere and otherwise, be it Kejriwal or Gandhi.

It is always healthy in a democracy to have a strong opposition, which seems to have been absent for almost 4 years now in India. Unchecked power leads to a major superiority complex among the elected leaders which eventually starts to hurt the country.

Further, he said “The way corruption, poverty, unemployment and the real issues are being swept under the carpet and ghar wapasi, love jihad and cows are being given space, we stand against that. We do not believe in love jihad. We are the believers of love. We will celebrate April 14 (Ambedkar Jayanti) and February 14 (Valentine’s Day).”

The speechwriter drew a parallel between Ambedkar Jayanti and Valentine’s Day without offending any lower caste people, because, well, they have other problems to deal with, for eg. untouchability, poverty, manual scavenging. It is a fact that issues like ghar wapsi and love jihad have taken over the mainstream media/politics and are being used as election tools, and quite successfully so.

All parties including Congress, BJP and AAP should take a leaf of advice from this. Gibberish talks and larger than life promises aren’t a solution to this country’s problems. Cut the crap. Talk about the real issues and how to tackle them using the governmental machinery.

In his earlier speeches, Mevani has constantly asked the Prime Minister to break silence on important issues.

To put it candidly, PM Narendra Modi is being seen to act as nothing but a mute spectator to all the incidents of violence against the people of his own country, be it lynching, hate crimes, religion and caste-based crimes, or violence against any form of dissent.

However, he somehow manages to take out time for touring the entire country during election season to hit out at opposition parties. These theatricals on his end need to stop.

While the Opposition does, in fact, bring to limelight news of targeted violence, its role is mainly restricted towards fulfilling its personal agenda. They are stuck up on what derogatory words were used against its leaders by the ruling party, which is hardly an important issue the country is facing.

To end this blog on a funny note lets hear what Kanhaiyya Kumar had to say. He said, “BJP isn’t a party, it’s like a brand new washing machine, where something goes in but comes out sparkling clean. Of the 282 MPs, 109 MPs have serious crimes allegations against them.”

This, to be gentle, is true to all the parties. All promote criminals.

More on ED Times by me:

Triple Talaq Bill Passed In Lok Sabha: The Bill Is Progressive But Is It Flawless?