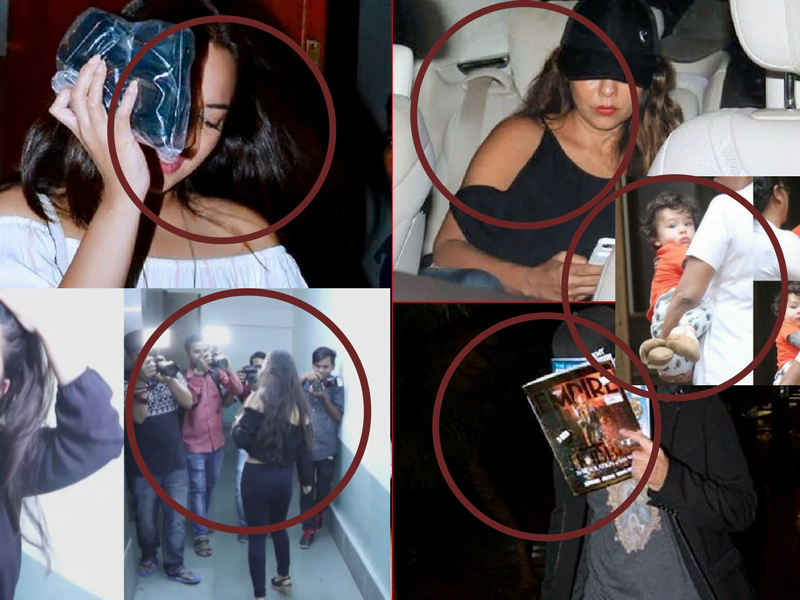 If you’re obsessed with scrolling through Taimur’s pictures on random Insta handles, this article is totally for you.

Here read on as our bloggers present both sides of the coin of celebrity stalking!

Celebrity stalking is very entertaining and no one can deny it! ~

Celebrities are entities whose lives are always out in the open. With the current social media scenario, where people can directly connect with their favourite celebrities through platforms like Facebook, Instagram and Snapchat, knowing what is happening, not just in their professional lives but also in their personal lives has become addictive and a provides a direct source of entertainment.

Coming straight to the point: why celebrity stalking is entertaining, is because whatever is happening in their lives, isn’t happening in yours. So that automatically translates to being entertaining. Entertainment needs different channels. In the case of celebrity stalking, that channel is gossip. One can say anything and everything about a celebrity, which makes their lives all the more appealing.

India thrives on gossip. And what better source for gossip than our very own movie stars. Conversations between 13-year-old girls these days go like “OMG did you hear Gigi and Zayn broke up, I’m so upset.”

Another reason why celebrity stalking is entertaining is that people are nosey. If they’re nosy about their neighbors, they’re sure to be nosy about the lives of famous people.

Celebrities have had a crucial role to play in the lives of people. They have starred in epic movies, have played iconic roles and are often times role models for people.

The whole movie was iconic so characters like Thakur, Jai, Veeru, and even Gabbar are adored by people. This develops an attachment towards them and hence creates the need to know what is happening in the real life of the stars who played these roles. Celebrity crushes are great triggers too. The crush might be on an individual or a couple. Virat and Anushka’s wedding pictures were being circulated on WhatsApp till months after they had gotten married. Everyone wanted to know whether she was wearing Sabyasachi or Manish Malhotra.

Also, in a country like India, where Salman Khan’s movies, full of action, masala and crude one-liners, get the crowd hooting and whistling,  celebrity stalking, is one of the most fulfilling, time-consuming and full of masala forms of entertainment. Celebrity stalking induces curiosity and there develops an incessant need to feed that curiosity. Let’s take the case of Taimur Ali Khan Pataudi. The child is one and already has an Instagram fan page dedicated to him with around 72k followers.

Why? Because people want to know where Kareena is taking him, how many people came to his birthday party and so on. They want to be entertained!

Anything that brings people close to getting these insights, becomes entertaining. TV channels like Zoom, MTV, VH1 etc are all means with which they can achieve that satisfaction of feeling entertained.

Also, read: FlippED: Is The Millennial Generation Beginning To Revel In Mediocrity? Our Bloggers Fight It Out

It’s crazy how paparazzis are intruding in celebs’ lives these days. Calling it entertainment is even more crazy and definitely not cool! ~

A few days ago I happen to come across a video on Instagram. It was a poorly shot video of SRK’s daughter Suhana Khan stepping out of a disc in Mumbai. Wait, that’s not just it. In the video, Suhana clearly looked uncomfortable with the paparazzi running behind her, trying to get too close to get a good clip/picture for their social media. She constantly hid her face and walked briskly towards her car until a bodyguard came and yelled at the photographers/videographers.

Such videos and pictures are pretty common these days. Taimur bathing, eating, sleeping, pouting in pictures is an everyday affair on our social media handles. Paparazzi don’t shy away from flashing their cameras right in the eyes of these celeb children.

If harassment of these little children or intrusion into the personal lives of celebrities by these so-called paparazzi is entertainment to you then I don’t know what your definition of entertainment is.

Celebrities like Shahid Kapoor have often shared horrible stories and incidents wherein media personnel just cross the line and don’t let them breathe for even a second. Now, I understand that there is always an air of curiosity around celebrity lives. People are always excited to know what their favourite celebs are up to. But then aren’t their own handles enough for that?

I mean most of the celebrities realise how their fans want to stay connected and know about their glam lives. This is why almost all celebrities share more than enough of their life on social media.

What is incomprehensible to me is that the paparazzi still disturb celebrities in their private family time or leisure time. I would even let it pass if they do it decently. What irritates me is when they try to get too close or just don’t listen even when they’re told off.

I mean just think about it how would you feel if there is someone always watching you-clicking you, even when you’re stepping out of a flight sleepy eyed in a bad mood? Celebrity stalking isn’t entertainment, people! It’s just local Bollywood masala media trying to sell that harassing is fine. For these people, it’s fine to cross the line with celebs in the name of “content”.

Now, most of you will give logic by saying that celebrities sign up for it. Let me just say that celebs don’t sign up for harassment or cyber stalking! At the end of the day, celebs are people like you and me who need some space.

So friends, if watching such crass videos and pictures on your social media is your favourite thing to do, it’s time you reconsider your “hobbies” and “entertainment” choices.

Tulsi Vs Parvati: Who Was The Better Bahu? Our Bloggers Fight It Out!