According to the Global Innovation Index (GII) 2020 report, India has entered the list of top 50 innovative countries in the World Intellectual Property Organization (WIPO) ranking. India ranks 48th on this list after climbing up four places from 2019’s level.

India has been accepted as one of the leading innovation achievers of 2019 in the central and south Asian region. This owes to the fact that India has shown a consistent improvement in its innovation ranking during the last five years.

According to the GII report released on Wednesday, India ranks third amongst the lower-middle-income economies, in terms of innovation. The report suggests that India, along with China, Philippines and Vietnam, has shown significant progress in GII innovation ranking over the years.

In terms of innovation, this is the first time that India has ranked among the top 50 countries in the world and this progress is attributable to a variety of factors.

The report suggests that this jump in India’s rank can be attributed to new indicators and improvements in various areas in the Global Innovation Index. This improvement is also attributable to immense knowledge capital, startup culture and commendable research work in India.

In 2019, the NITI Aayog released the India Innovation Index which, according to various experts, has led to the decentralization of innovation across all states of India.

Other than this, India has performed exceptionally well on certain indicators which include ICT services exports, government online services, graduates in science and engineering, and R&D-intensive global companies. India ranks in the top 15 countries on the aforesaid indicators. 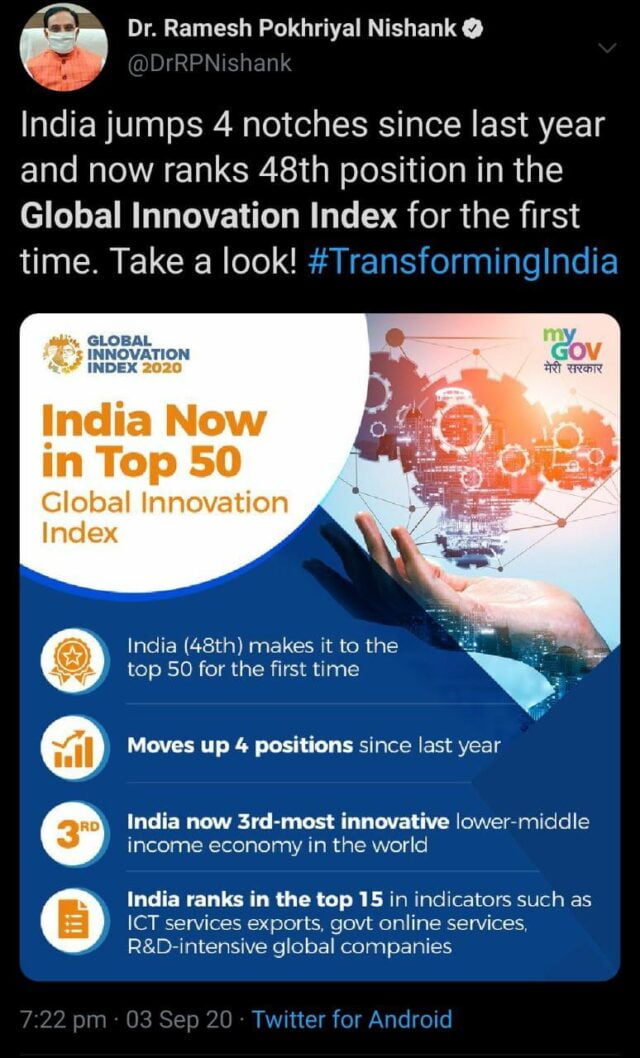 The report further added that there is a “gradual eastward shift in the locus of innovation” because a group of Asian economies are continuously advancing up the rankings. Currently, China is the only middle-income economy which is ranked among the top 30 countries.

Hopefully, the Indian economy will continue to deliver impressive performance and display a continuous improvement in terms of rankings.