Home Politics If These Recent Incidents Of ‘Extreme Intolerance’ During CAA/NRC Protests Are Not... 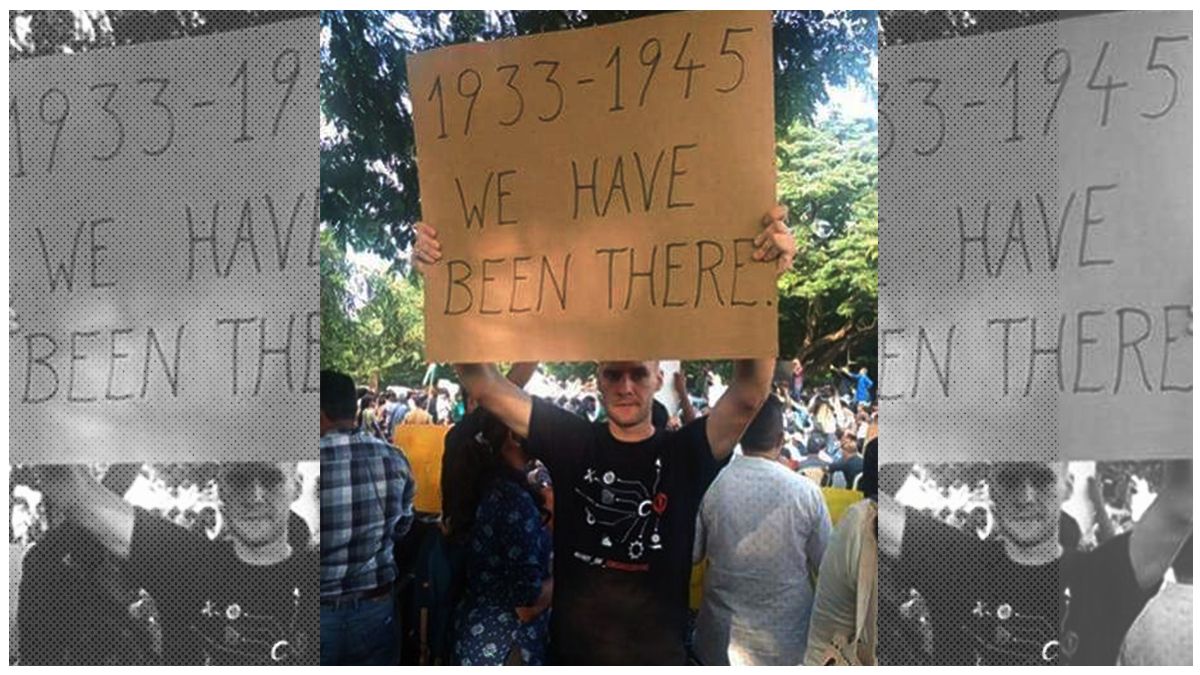 The CAA and NRC (National Register of Citizens) protests are still going on around the country with no stopping them even after almost 10 days since it was announced.

The controversial CAA (Citizenship Amendment Act) that was approved by the President on 12th December has been the biggest news of India due to its controversial nature.

The Act amends the 1955 Citizenship Act where it would allow Hindu, Buddhist, Sikh, Parsi, Jain and Christian illegal immigrants from Afghanistan, Bangladesh, and Pakistan who entered India on or before 31st December 2014 legal citizenship in an easier manner.

The fact that the Act very obviously discriminates against the Muslim community and goes against the secular fabric of the country is something that has angered citizens around India, no matter their religion.

Their dissent with this Act has resulted in massive protests being carried out in several states of India and to curb this authorities have given more power to the police, carried out internet shut downs and more.

Along with that there is also social unrest and instances of intolerance popping up more and more, sending a chill down my spine.

Here are a few of them that came out just recently:

Jakob Lindenthal, a German post-graduate student of Physics at the IIT (Indian Institute of Technology) Madras was sent back to his country after he participated in anti-CAA protests.

He has already left the country, going back to Amsterdam on Monday and apparently as per his statement to Indian Express he was given oral directions to leave India by the Foreigners Regional Registration Office in Chennai. 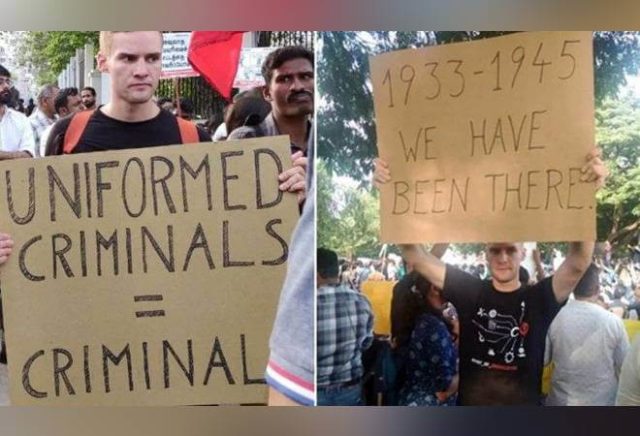 Lindenthal stated that, “After I reached Chennai this morning, my course coordinator advised me to meet immigration officials immediately. When I reached there, they cited some administrative issues related to my residential permit in India. After I resolved their queries and it was clear that there were no issues regarding my residential permit, they started asking me about my politics and hobbies. It was an extensive casual conversation. They asked about CAA and my participation in anti-CAA protests. We discussed the demonstration culture. There were three officers including one who asked me all questions. All of them were unnamed. Towards the end of the conversation, they said I may have to leave the country immediately for violating my student visa rules. When I asked for a written letter, they returned my passport and said that I may leave. They said I will get the written letter but I did not receive one. Soon, I rushed back to IIT campus, booked my ticket, packed everything and left for the airport.”

The 24-year-old student was seen holding placards thats said “Uniformed Criminals = Criminals” and “1933-1945 We have been there” with the latter one referring to the Nazi regime in Germany.

According to reports he was told to leave since his involvement in the protests violated his visa terms, however, an acquaintance of Lindenthal was quoted by ThePrint saying that,  “Lindenthal had only one semester remaining to complete the programme. He had taken part in other protests too, and have helped fellow students during a hunger strike against the alleged suicide of IIT-Madras student Fathima Latheef in the campus last month.”

It is learnt that Jakob Lindenthal, an exchange student at @iitmadras, from Dresden Germany, is asked to leave India asap. Recently he joined #CAA_NRCProtests in Chennai. pic.twitter.com/ZeS8h6ibfR

#2. Gold Medalist Muslim Student Not Allowed Entry Into Her Own Convocation

A female Muslim student, Rabeeha Abdurehim, was not allowed to attend the 27th convocation of the Pondicherry University from where she was doing her postgraduate degree in mass communication.

Abdurehim has gotten the first rank in her batch and was to receive a gold medal for her achievement.

However, it is reported that she was not permitted to enter the venue while President Ram Nath Kovind was present there when the function took place on Monday.

It is alleged that she was refused entrance into the venue because she was wearing a ‘hijab’ which is a scarf that Muslim women wear over their head when stepping out of their house. 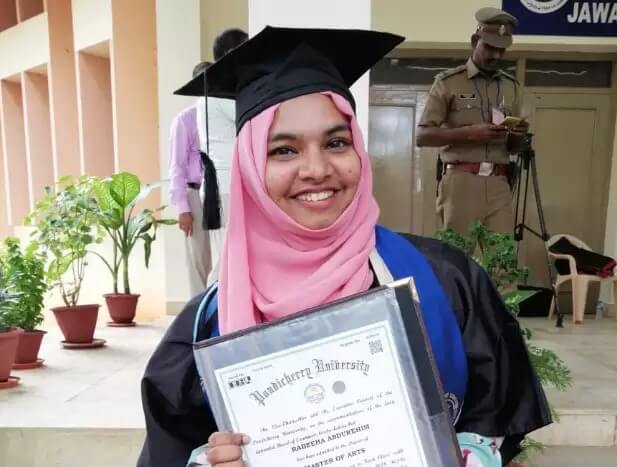 As per reports, she had to stand outside for around 20 minutes and Rabeeha said that, “The students were asked to be at the venue an hour before the president came. I followed all the protocols and sat in the seat allotted to me. A minute before the president came, a police official came and said they needed to have a word with me and took me outside. The door was locked. Then I realised the programme had started. I was still asked to wait outside. When I asked the police why I was made to wait outside, they said nothing. In fact, they said they have no idea and I was asked to be seated [outside] by the senior superintendent of police.”

Although she was allowed entry once the President had left, she refused the gold medal as a way to protest against the CAA and NRC.

I have dreamt often about the moment I would receive my gold medal and master's certificate fondly. Never did I imagine…

Read More: As A Small-Town Girl Studying In Kolkata, Here’s A Detailed Analysis Of What I Saw Around Me This Past Week

#3. Pro CAA Protesters Given Permission But Not Anti CAA

As per reports, it has been said that some discrimination with protesters is also being shown. Apparently those who are holding pro-CAA/NRC rallies are being given permission by authorities to do so while anti-CAA/NRC protests are being denied permission.

In Bengaluru itself various right-wing groups have held rallies to support CAA with recently around 500 people collecting at Bengaluru’s Town Hall doing so. Among these people there were also members of Hindu Janajagruthi Samiti.

Along with this, BJP National General Secretary Bhupendra Yadav had also announced that BJP would be starting their own campaign in support of the CAA.

But this seems to be in direct contradiction with those opposing CAA who are being denied permission to hold their own peaceful protest. According to reports the police would not give permission for a ‘sathyagraha’ against the CAA that was to be held in Bengaluru’s Benson Town.

Vinay Sreenivasa from Alternative Law Forum stated that, “The place we had chosen to hold the sathyagraha is private property. Yet, the Bharatinagar Police refused to let us conduct the event stating that we had to obtain police permission of the gathering. Section 144 has been lifted in Bengaluru, and yet they are not allowing a gathering on private property? Police permission is required only if protests are taking place on public property.”

#4. Tons of People Detained + Internet Shutdown in the Capital Of India

Detention seems to be the go to move of police to curb protesters against the act. On Monday itself, around 140 people were detained in Delhi. 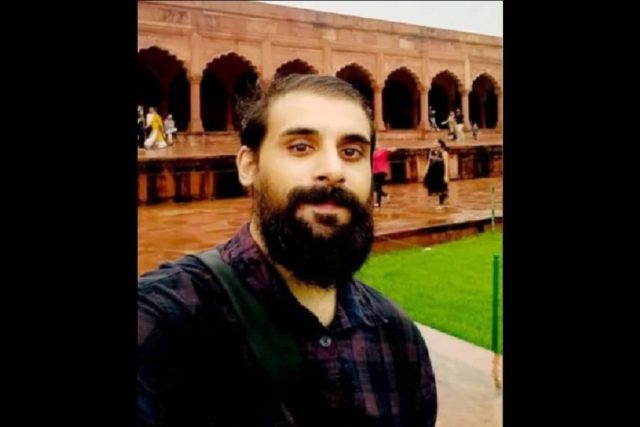 #5. ‘The Hindu’ Journalist Taken By The Police As A ‘Suspect’

Omar Rashid, a journalist from ‘The Hindu’ recently recounted his harrowing experience of being picked up by the police, threatened and harassed when he was in Uttar Pradesh to cover a BJP press conference.

In his account he recalled how four men in plain clothes approached them and used “strong and aggressive language” to question him and an activist friend Robin Verma who was with Rashid at that time.

Rashid wrote that, “At the very first instance, I revealed my identity as a journalist and asked them what the matter was all about. However, they packed the two of us, Robin Verma and me, into a police jeep, snatched my mobile phone and asked me to not call or inform anyone or I would regret it. They refused to explain anything to me and asked me to talk only when they asked.”

It is inspiring to see though that all this has only served to make the citizens of India even more determined to protest against a discriminatory Act.