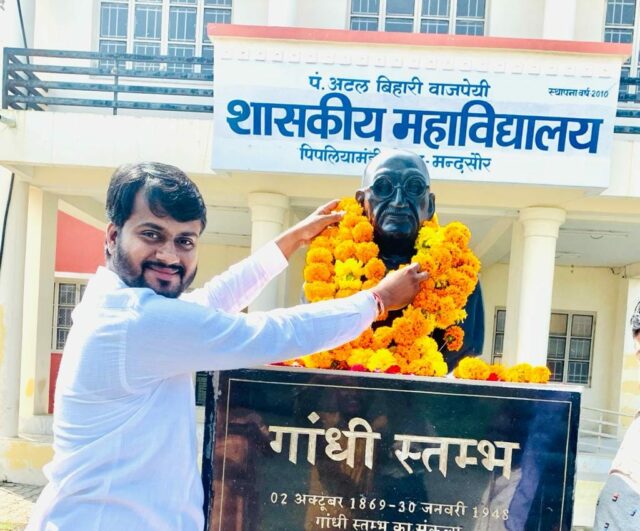 It must be admitted that knowledge goes unnoticed without proper utilization if there is a lack of innovation, producing no valuable resources in return. It is only through the involvement of innovative ideas that new knowledge can be cultivated. It is only innovation that moulds knowledge into wealth and social good. So today we have come with the multifaceted virtues of Chanchalesh Vyas whose story is inspiring for the youth and the upcoming generations.

We have seen in movies that a boy of a small town grows up to be a big businessman or turns into a powerful leader. But this is a very rare case in real life. Chanchalesh Vyas comes from one of those rare cases. He belongs from the small town of Piplia Mandi close to Mandsaur, Madhya Pradesh but his dreams and goals were never too small. He was and has always been an ambitious person. Neither his family comes from an elite group nor his circle belongs to that of a political one. Still, his potentials and insightful mind have unfolded many ways for his success. Thus rendering all the credits solely to his efforts and hard work.

It dates back to 2011 when he became the GS (General Secretary) of NSUI (National Students Union of India) in the Mandsaur District. His journey started with his participation in student politics ensuring an ongoing series of future opportunities for him. Two years later, in 2013, he also contributed his time and efforts in working with the Indian Youth Congress, Madhya Pradesh. This incident completely modified Chacnchalesh as a person.

It is well said that -‘Your goals are what they make of you.’ His productivity under the leadership of Youth Congress President, Kunal Chaudhary grew and expanded with time. His attitude of never compromising with the efficiency of his assigned tasks prompted people to appoint him as a coordinator in Youth Congress IT Cell. Chanchlesh concentrated on moving the youth with his inspiring achievements.

He walked along with the footprints of Rahul Gandhi and inherited his work ethic too. The IT sector is one of the most of sectors for the youth of our country. But many return unemployed to their homes because of the neck-to-neck competition.

When Chanchlesh’s joined the IT Cell it lit up the pathways of many IT sector aspiring youth.

Upon being asked about his inspiration, he said “I have learned a lot of things from Kunal Chaudhary, he helped me whenever I needed. Now I want to stand by the expectations of my party and its members, who have given me this opportunity. I believe in working actively and making the most of it to help common people.”

Soon on August 23, 2019, he became the president of the Indian Youth Congress Madhya Pradesh IT Cell. In addition to this

Consequently, he possesses all the features of a real-life hero who started from scratch and reached a level that was once questionable.