Indians don’t necessarily have the best reputation when they are travelling abroad.

This is further highlighted when the recent case of a family stealing hotel items was put forward.

On 27th July, Twitter user @rumilife0612 uploaded this video of an Indian family’s bags being searched by the staff of a Bali hotel.

The video which has now gone viral, collecting almost 116.4,000 views has brought light to the issue of Indian travellers and their lack of etiquettes.

Why do Indians do this I just can’t understand. One shd maintain a certain kind of dignity n class ..What is this #Shame pic.twitter.com/VzmzqmZmVv

Crossing over 2 minutes, the video also shows the hotel staff taking out the luggage of the family, searching through them and finding out various items having been stolen.

According to reports, the family had taken things like hangers, dryers, toiletries, towels and as per some people on Twitter even things like mirrors and artwork from the hotel rooms.

This incident also brings to light this notice by Hotel Arc-en-ciel in Gstaad, Switzerland that had riled up people for specifically targeting Indian guests.

The notice by hotel manager Christian Matti had a list of rules and regulations that Indian guests need to be careful of, such as the work timings for reception desk, not to take food from buffet breakfast back to the room and more. 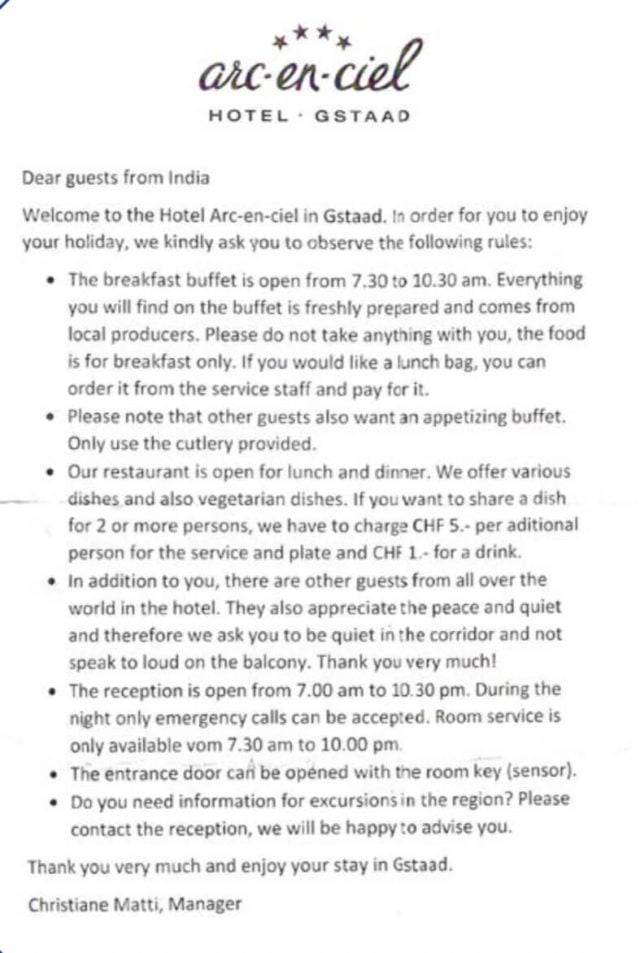 While it angered a lot of Indians, industrialist Harsh Goenka of the RPG group tweeted an interesting observation on all this.

Reading this notice I felt angry, humiliated and wanted to protest.
But a realisation dawned that we as tourists are loud, rude, not culturally sensitive. With India becoming an international power, our tourists are our best global ambassadors. Let’s work on changing our image! pic.twitter.com/7R4ZrZIXKi

In it he stated how although he felt angry and humiliated with the blatant call out of Indians and the wording of the notice, he also had to admit that Indian tourists have a lot lacking in their behaviour.

And to a certain extent I do agree that while it feels bad to be singled out like this, we have no one to blame but ourselves.

While it is alright to feel hurt by such a notice and the fact that they specially named the Indian community, we are not that blameless ourselves.

I’ve noticed myself, the utter disregard for rules and manners by Indian travellers in foreign hotels.

They can be loud and erratic even more so when children are present where the parents just let them run wild wherever they want.

And though I do agree that it is not just Indians who can behave in a bad manner and there are other communities too with their own rotten apples, but at the same time, it is India who is under the spotlight right now.

It is high time that Indian travellers, whether they are within their own country or abroad are cautious of the image they give off since they are now representing their entire country.