Home ED Originals FlippED: Should Single Parents Be Allowed To Have A Child By Surrogacy?... 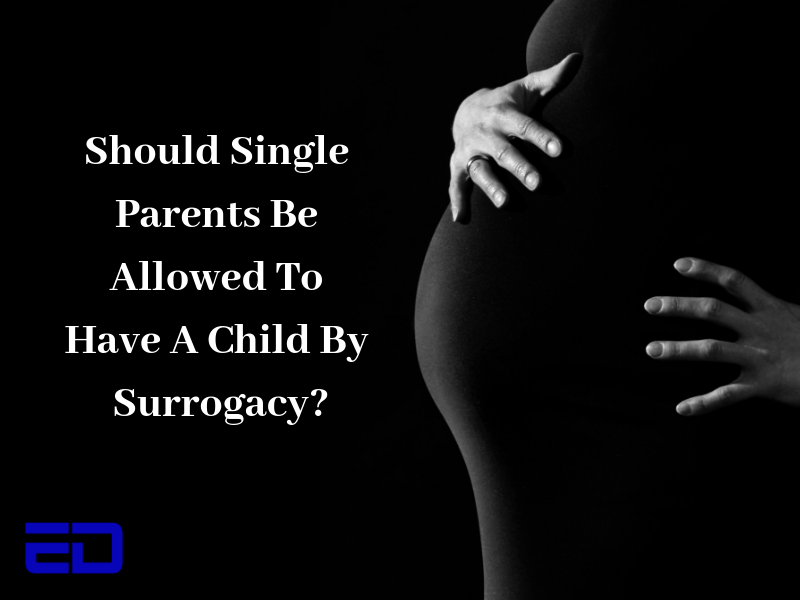 We’re back with the FlippED!

The Surrogacy (Regulation) Bill which was passed in the Lower House of the Parliament but was stalled in the Upper House in 2018 has been re-introduced again.

This bill leaves out single and homosexual partners from choosing surrogacy as an option. Our bloggers debate whether this move was right.

“Even if the parent does the job of raising the child pretty well, the child might still feel an emptiness resulting from the absence of the second parent.”

The Bill is an outright controversial one and has invited frowns from innumerable people for the stringent restrictions it proposes for surrogacy.

Among other things, it also disallows single parents to have children via surrogacy. This essentially implies that unmarried or divorced individuals are barred from having children by a surrogate mother.

While the idea of banning single parents to have kids from surrogacy might seem outrageous at first, it is not without sense.

For healthy development, the child needs love and care in equal amounts from both the parents.

So, a child brought into the world by a surrogate mother and handed over to the parent naturally loses out on the affection of one parent.

No matter how responsible a parent the individual might be, at some point or the other in life, the child would feel the void created by the absence of another parent.

Just in case the single parent falls victim to an unfortunate mishap life accident or death, the child clearly would be left parentless.

It is possible that close relatives and friends of the parent could partake in the responsibility of raising the child, it still doesn’t equal the love that a parent can supply.

Plus, there could be many cases where relatives and other family members may not be comfortable about the single parent having a kid via surrogacy. In that case, the child has just the parent to fall back on.

As mentioned earlier, parenting is a shared responsibility. One parent raising the kid puts the entire responsibility on him/her alone. When the parent gets occupied with other priorities, the child would surely lose out on much-required attention during the developmental years.

Also, society isn’t enough minded to accept children of single parents. The child then runs the risk of being bullied or harassed by other children at school.

Related: FlippED: What Is Better: Adulthood Or Childhood? Our Bloggers Fight It Out!

“This law could have been applied in the 20th century, not in modern times.”

Let me begin with a simple argument, why is the government trying to contradict one law with another?

When homosexuality was declared legal or further going back in the past, when live-in relationships were deemed legal in India, little did we know that we were enjoying a hollow victory!

When a person chooses not to marry, it is a personal choice that should not concern the state (ideally). Similarly, having a child is a matter of personal choice which cannot be seen with the bright red lens of marriage.

When a person decides to stay single, she does not get herself a certificate for staying childless all her life; not when she’s in the 21st century and has modern scientific advancements at her footstep.

For people, (married or not), having a child means having a part of themselves that could make them and their lives feel complete.

The government cannot take away, what could have been the biggest happiness for someone, simply because it has barbaric views about marriage and parenthood.

If two people were supposed to be bestowed a divinity when they tie the knot, I’m sure we wouldn’t have foster homes where parents abandon their children in the dead of the night.

If parenthood was in any way influenced by the “happy marriage” of the couple, we wouldn’t have seen children going through the emotional turmoil that they do when their parents seek a divorce, or worse, when they stay together and still intend to almost kill each other.

If you do understand child psychology, you would know how much a child gets affected by the atmosphere in the family. Being raised in a family where they see their parents argument every day or cheat on each other, or sometimes physically hurt each other, ruins the entire idea of childhood for them.

So as far as happiness and proper emotional growth is concerned, a child, I believe, can be happier with a single parent who keeps him away from the toxic atmosphere of a failed marriage, so that he doesn’t grow up believing that marriage is a mere formality where two people have to forcefully bear each other for the rest of their lives.

Another issue here could be the time or attention that a single parent might not be able to devote. People need to understand that in most families, both parents are working. Therefore, this argument fails when you compare both situations. Parents, despite their working schedules, fight hard to take time out for their children.

A single parent who would have been so desperate to have a child that she opted a surrogacy, would anyway keep her child as the first priority.

FlippED: If One Claims To Be Mentally Ill, Should They Be Pardoned For Heinous Rape And Murder Charges?