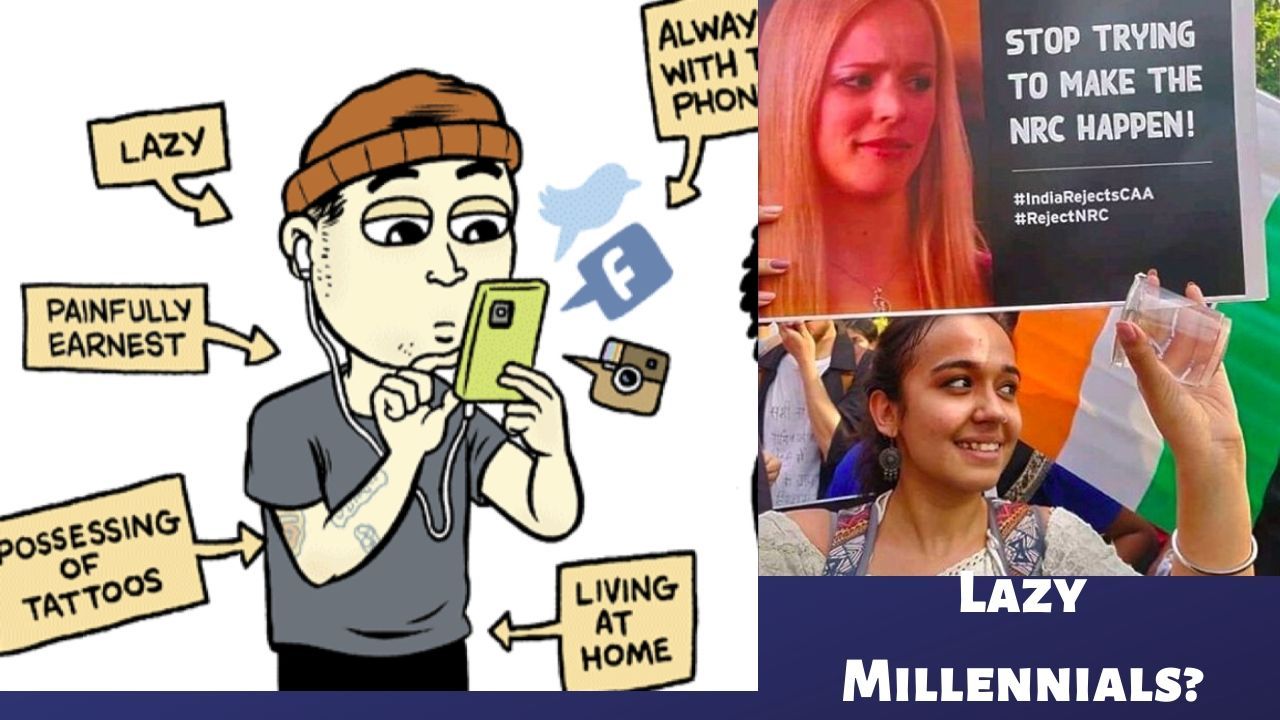 Millennials are often ridiculed for spending their time procrastinating about things. People complain that they are unproductive.

However, after the recent happenings such as the CAA (Citizenship Amendment Act)/NRC (National Register of Citizens) protests and climate change strikes where millennials played a crucial role, do they still deserve this label?

Millennials Are Not Aimless And Lazy

Millennials have been proactive in furthering the causes they believe in. Idle and slothful, they are not-
Blogger Ishita

This entire year, Greta Thunberg led the global movement for climate change, inspiring millions. And now we see how Indian millennials didn’t bow down to the unconstitutional laws that the government proposed. Hence, I believe that calling the entire millennial generation ‘lazy’ would be incorrect.

It wasn’t the opposition party who challenged BJP over the CAB that discriminates against minorities, poor people and the transgender community. It was the students who led protests against the unconstitutional bill.

Starting from the students of Jamia Milia Islamia and Aligarh Muslim University, the students spread the message about the current government’s fascist policies.

People belittled them as ‘rioters disrupting the peace’ when the students took action. They even ignored the blatant police brutality because according to them, ‘students instigated violence first’.

Still, this hasn’t lessened the youngsters’ enthusiasm as they continue to stand for a secular and democratic India. I agree that not all millennials are out on the roads. However, this doesn’t mean the efforts of the rest are in vain. If this were the case, the movement would have fizzled out a long time ago.

2. Do Not Underestimate Social Media

Yet, another thing that millennials are mocked for, is their addiction towards social media. Though certain individuals just hop on the bandwagon of the latest hashtags, others know how to wield social media to support a cause.

Take the NRC protests, millennials are reaching out to one another informing them of their rights, in case they are detained during protests. They are teaching people how to work through internet shutdowns.

They are not letting the BJP IT cells win. #CAAprotests has been constantly trending. Their struggles have led to the movement gaining international support from the UN.

According to the global millennial survey conducted by Deloitte, around 57% of millennials aspire to contribute towards society positively. This shows that they are not afraid of challenging the status quo, and are willing to take action.

Millennials have been proactive in furthering the causes they believe in and they leave no stone unturned to make their desires become reality.

Idle and slothful, they are not.

Also Read: If These Recent Incidents Of ‘Extreme Intolerance’ During CAA/NRC Protests Are Not Chilling To You, I Don’t Know What Will Be

Youth Is Still Aimless and Lazy

Is the youth ready to make a real change and not just shout slogans?-
Blogger Anjali

For the last couple of weeks, I looked at the protests that took place in various cities of India and against the allegedly anarchical and unconstitutional Citizenship Amendment Act and I wasn’t untouched by the strong emotions.

However, without disregarding the efforts of the youth in the present issue, I still believe that the young population is aimless and lazy.

There are several reasons why I think so:-

India is one of the youngest countries having a young population of over 600 million, i.e. 60 crore people. However, the protests only witnessed the presence of about 5 lakh people.

While we can exclude as much as 50 crore people on the pretext of age and reasonable causes, the leftover approximately 9 crore and 95 lakh people didn’t come up to even voice their opinion in the public domain.

Doesn’t matter whether they were in favour or against the bill, what matters is whether they made themselves aware of the matter and formulated an opinion. If they formulated one and didn’t speak up, they lead the youth down.

While I do not disregard the power of social media, I do understand the fact that social media marketing of a cause and trending a hashtag, making comments will only help you to a certain extent.

Social media has a wider reach but the change can be made only through real action which should not be limited to virtual presence. However, it seems that the youth understood otherwise.

Another reason why I think that youth is not aware of its surroundings again involves social media. I do not say that people didn’t read up the matter in question before framing an opinion, however, these were only a few.

Influence played an important factor and so did social media. Whatever is said on social media may not be true and even if a section of youth goes by what people speak, without making an effort to read it themselves, they aren’t aiming in the right direction.

I agree that at the moment, the revolutionary attitude of the youth created a significant effect however, what about the future? Is the youth ready to make a real change and not just shout slogans?

Are they ready to leave the easy jobs and enter politics, civil services, police, and armed forces and avoid the evils to make this country better?

Because if they aren’t, then nothing is going to change in reality and another Modi would come and another CAA would be implemented. The youth needs to make a decision and that too quick.