Home Sports FIFA World Cup 2018: Does France Have What It Takes To Go... 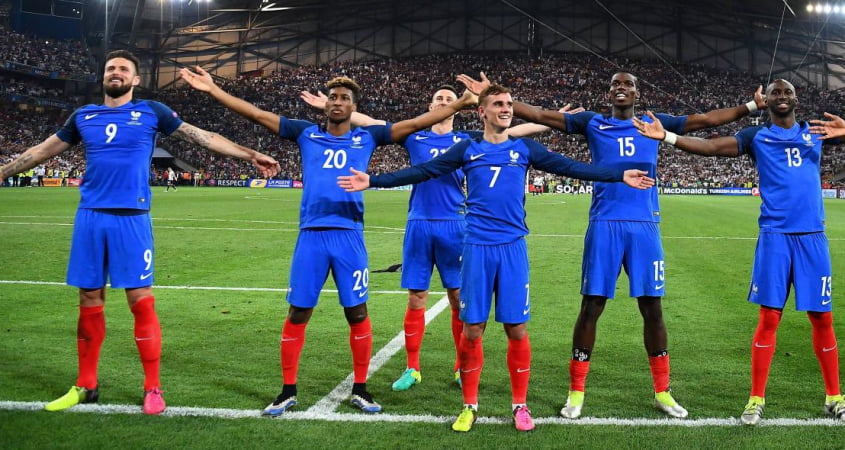 After some dismal efforts at Euro 2008 and the World Cup 2010, France saw themselves slip to an all-time low FIFA ranking of 27.

Come 2018, France can call an array of talented players since the days of Zinedine Zidane, Thierry Henry, and Patrick Vieira. Long gone are the days of optimism and only victory will suffice.

Yet there seems to be an expectation among many that France will be beaten at some point in Russia, by Spain, Brazil or Germany.

Without much ado, let us look at the many factors which might decide France’s fate in the World Cup 2018-

There is little doubt that France possesses the best squad in this year’s world cup.

With the likes of N’Golo Kante, Antoine Griezmann, Kylian Mbappe and a host of other incredible players. Their potential in attack is clearly superior today with the addition of Thomas Lemar and Ousmane Dembélé, they also have more options in midfield with, for example, Corentin Tolisso, and the younger players have gained more experience during the qualifiers.

Arguably no country in the world can match the strength in depth of the French. With the likes of Alexandre Lacazette, Kingsley Coman, Adrien Rabiot and Anthony Martial at home, even the best XI who have stayed at home can give any country a run for its money.

Key to France’s success will be to get all the star players playing to the best of their ability, including Paul Pogba, who has had an underwhelming season with Manchester United.

Their style of play has evolved a lot in the recent years and is much more based on their speed, movement, and devastating counter-attacks.

Deschamps seems to favour a 4-3-3 formation and even 4-4-2 at times depending on the opposition and the nature of the game. They usually operate with depth in midfield and quick wingers with pace up front.

The 1998 glory team and the 2006 team relied on their defensive solidarity, ability to win the ball and physical power while Deschamp’s side gives bigger emphasis on counter-attacks, more speed up-front and more individual involvement.

The French entered the past two tournaments with a classic three-man midfield of Pogba, Kante and Matuidi, with Tolisso as a possible alternative. As far as the 4-4-2 is concerned it allows the partnership of Griezmann and Giroud in attack with Matuidi on the bench.

There is a perception in France that Deschamps, as a player and manager, has always had luck on his side.

Didier Deschamps was captain of the World Cup-winning team in 1998, giving him the tag of someone who has been there and done it. His tenure with Les Bleus has given the side, real stability since 2012.

The players still trust him but there have been a few other incidents where his decisions have been questionable and where his approach has been poor.

Also Read: We Look At The Top 7 FIFA World Cup Squads And Analyse Their Victory Chances

What can hurt their chances?

In-spite of their superiority in attack and midfield, as a unit they still lack the consistency, personality, and control to make them natural favorites for the World Cup, with their best XI yet to be figured out by their coach.

When it mattered the most, they lost. The Euro 2016 final posed as the perfect question mark on their experience. With the squad two years older, who knows things have changed.

This season we have seen contradictory results from France. The 3-2 defeat at home to Colombia presented us with a half hour of attacking the football and an hour of defensive embarrassment.

In Toulouse last year, France was unable to beat Luxembourg after Deschamps got his selection wrong as well as the defeat to Sweden in another World Cup qualifier in June 2017 where he was blamed for his wrong choices.

The consistency of the team has posed questions on coach Didier Deschamps and whether he’s the right person to guide them to glory.

France lost key players such as Dimitri Payet and Laurent Koscielny through injury and it remains to be seen how much they will be missed.

Questions are left unanswered in the full-back area. With first-choice full-backs, Djibril Sidibé and Benjamin Mendy, injured for most of the season, how tough and inventive can France be defensively?

Although those two are included in the 23-man squad, but if not fit to start, how will Benjamin Pavard and Lucas Hernández cope as back-ups?

The Pressure to win

Even Noel Le Graet, the President of the French Federation has stated the objective of the team to at least reach the semi-finals at the World Cup. Although it is a bit strange that a team would not aim for the main cup, it does make sense when considering France’s current position.

Because the football supporters from France will be expecting nothing less than the silverware.

The team is under a huge burden to finish the trophy drought which has lasted for 20 years. Expectations are high. So will the pressure.

But as the French say, nothing is impossible.

Is England Good Enough To Win The World Cup 2018 In Russia?