Martha Nussbaum, a professor of philosophy, in her book “The Clash Within” explains how communal violence can be promoted through historically built- fear, shame and disgust by giving the example of Gujarat 2002 communal violence.

She mentions in her book, historian Tanika Sarkar, who had investigated the events and witnesses,

stated that evidence showed obsession of men with destroying women’s sexual organs which expresses “a dark sexual obsession about allegedly ultra-virile Muslim male bodies and overfertile Muslim female ones, that inspire(s) and sustain(s) the figures of paranoia and revenge.”

The Hindu population has a major say in what’s happening as they are the majority by a huge number.

Hindus have an option to not have any contact with the Muslim population. However, the majority of Muslims don’t have this option. Given, their small number it’s inevitable that they’ll come in contact with Hindus. They are more familiar with the other community. Hence, the myths and lies about the Hindu population in most Muslim minds get undone.

Muslims already feel threatened and unsafe. They fear the huge population of Hindus.

Due to traditional Muslim belief that “children are Allah’s gifts” and some historical incidences, Muslims are often believed to be sexually very active and hence, it is believed that their population is constantly increasing.

In those days, one of Modi’s slogans for his election campaign in Gujarat was “ hum do humare do, vo pach aur unke pacchies” .

This slogan, statistics and other means were used to fashion an aggressive image of Hindu men just like what they show in Muslim men. Hindus were told to fear the growth of the Muslim population. They were told, the Muslims can take over numerically.

In Gujarat, Muslims were economically more well off. They are traditionally merchants and traders. Therefore, Hindus feared Muslims, both economically and numerically.

Gujarat is geographically closer to Pakistan, hence, it added to the fear factor in Hindu minds.

Historically, Hindus have been told that they are not masculine enough to rule themselves. Orientalist writers during the British rule extensively wrote on how first Hindus needed Muslim rulers and now British rulers.

Macaulay (colonial administrator), had official documents where he explained how Bengali men are effeminate and not capable of ruling themselves. 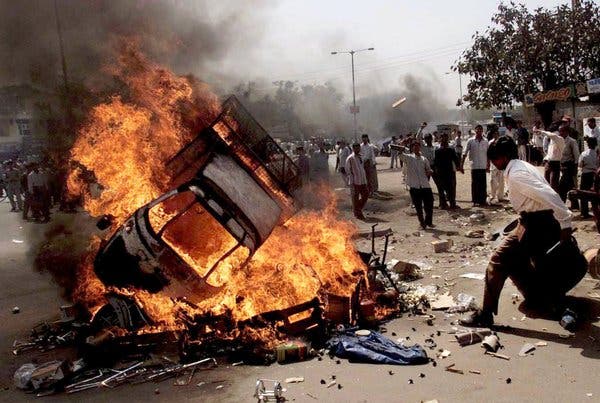 Given, the belief that Muslim men are more sexually active, made the Hindu men doubt his potency.

He became ashamed because others declared that he is not masculine enough.

To prove that he is potent, in the riots hundreds of Muslim women were raped by Hindu men and subsequently, their sexual organs were cut.

The belief that Muslim men are more sexually active which in the first place gave Hindu men the feeling of shame and fear was used to give rise to the feeling of disgust.

The reason for this disgust- uncontrolled sexual desire is an animal characteristic. Humans are different because they can think and logically take actions.

In return, the defeat that Muslim men faced almost every time during riots and the constant disgust that Hindu men put forward against them gave rise to the feeling of shame and fear in the Muslim men.

How history is portrayed and how it plays with the psychology of mind can have major consequences. If both the communities are familiar with each other and constantly interact with each other, they will come to know that one community is not very different from the other.

Consequently, these myths and false beliefs will be corrected.

ED VoxPop: According To Millennials, Why Does Communal Tension/Violence Exist In India?