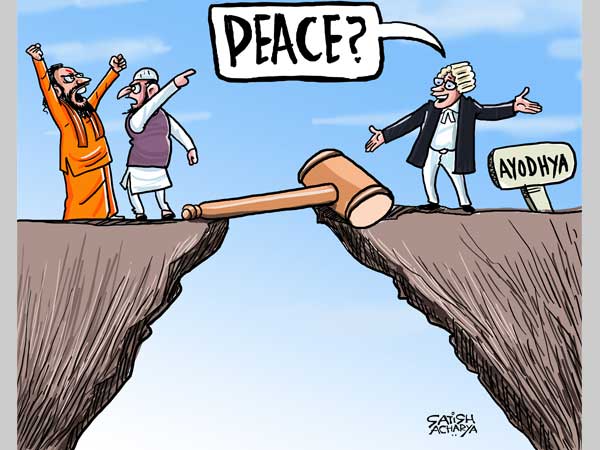 Kasgers are people belonging to a specific Muslim community who practice pottery by profession.

For those who don’t know, pottery is a traditional art form. It is the process by which pots and other objects are made by using clay and other ceramic materials.

Kasgers are found in the awadh region or in Pakistan only. They form a small community and mostly live on the outskirts of Lucknow.

They are engulfed in poverty. And, mostly the theories of communal violence say that poverty and unemployment give people reasons to fight as they are frustrated and idle and are tempted to any trap that can give them easy money, for example, politicians hiring people to increase communal violence for political gains.

However, Kasgers don’t let their poverty stop them from having a positive outlook or be a reason of communal violence.

Their profession results in Hindu-Muslim amity

On the contrary, their profession demands them to build a good relationship with Hindus.

The peak time of their market is the Diwali season. The items that these Kasgers make are essential for the puja of Hindus.

Hindu potters (Kumhars) usually indulge in making fancy items for Diwali whereas given, the economic condition of Kasgers, they make basic and important items for the puja and sell it at a cheaper rate in comparison to the Kumhar.

Bhagan Amed, a Kasger, while telling us about his consumer says

“Almost all Muslims are using cutlery made out of glass or plastics. If it wasn’t for our Hindu bhai, we wouldn’t have been able to earn our bread and butter. I’m surely a Muslim by religion but all types of people buy stuff from me. Pandits come to me. All sorts of babas come to me.”

Also read: Why Has Lucknow Not Witnessed A Hindu-Muslim Riot In 100 Years Despite Mixed Population?

The cheap rates offered by Kasgers is always a relief on the elaborate Diwali shopping of the Hindu middle class.

He adds, “There is no dearth in brotherhood. You follow your religion, I’ll follow mine. The world works on this. Now, if I say you are a hindu and I’m a muslim and try to find reasons to fight, then obviously there will be tension. You do your puja and I’ll read namaaz. This way there will be a sister-brother relationship and each one work will go on smoothly. My whole work is dependent on Hindu brothers. I don’t have any hatred for Hindus.”

It is amazing to see how the people who lack formal education understand the importance of amity than most educated people.

While talking about communal violence, he says,

“We have heard about Ram Mandir. I have never visited there. If there was a temple or not, only the God knows the truth. If the government wants then it can build the Mandir in 2-3 days but the matter is in the court’s hand. If the court decides in favour of Hindus then also we are fine with it, if it decides in favour of Muslims then also we are fine with it. It doesn’t matter which government is in power, we have to continue with our work.”

Being in close proximity and contact with his Hindu consumers, he understands that a Hindu is not an evil being but someone who is just like him and also helps him to have food and shelter.

When asked about the current government and if he feels safe or not, he adds, “What should I fear about? Why should I be afraid? My forefathers have done this work. This is my hard work. I’m not stealing anything from anyone. I earn and feed my kids. If the government brings out any scheme for us then its fine. Otherwise I don’t have any interest in politics. Whoever is in the government doesn’t bother us.”

The thing that worries the poor is if he is going to eat the next day or not rather if a masjid will be built or not.

Also, the poor in this case knows his Hindu consumers and neighbours too well to raise arms against them.

He also knows that this violence will be shorter duration and ultimately it’s his Hindu consumer who will help him fill his stomach as he has been doing for years.

This is not an attempt to romanticise poverty. But an attempt to put forward that the people we think as the other, belonging to the other community, might help us in need and make the world a better place to live in.

Economic interdependence can lead to formation of contacts with the other and eventually amity can be achieved.