We have had our fair share of fun with Cards against Humanity. It was time to give an Indian twist to this adult card game. Subsequently, Cards Vs Sanskaar (originally named Cards Against Sanskaar)  was born.

The card game was started by Smarter Than a Waffle Studios (aka Stawdio) as a prank in April 2018. The team tagged it as a game the nation wants to play.  You might come across some of the weirdest cards ever written leaving your son-scarred for life.

Never heard of the game? Guess we have something in common.

How to play Cards vs Sanskaar

Disclaimer: This game can be fatally dangerous for the weak hearted and the dull-witted lot. The doormat has clear instructions for such people,  ‘There is no reason for you to be here.’

Step 1: Open the pack of cards keeping in mind to do away the little amount of sanity left or reread the instructions on the doormat.

Step 2: In every round, a friend who betrays all innocence asks a mildly filthy question written on a black card.

Step 3: The rest of the group answers with the funniest unsanskaari red card.

What do these unsanskaari cards include?

The cards don’t disappoint anyone. Whether you are a Bollywood fan, a political enthusiast, a person with sexually inappropriate humor or one with a devious mind. This game has something in store for everyone.

Who doesn’t love malicious matching games and hilarious inappropriate conversations with your gals and bros every now and then? Also, we love picking up fights with pseudo-nationalists, don’t we? (Not me, ofc)

The Sanskaari team behind the venture played smartly by aiming to mint money out of meme-worthy political issues from last year.

There were times not only when Indian politicians defied science but also had fans graciously following into their footsteps.

Well, don’t get too happy. It isn’t only the cow who feed the calf. The Instagrammers and Twitteratis following absurd trends were a major inspiration for their content.

For those of you, pretending to look the other way. I hope you remember Taimur’s favorite color.

In an interview of Cards vs Sanskaar with Vice, team member Adrita Das tells, “We didn’t just want to get into the limelight for pulling down the government. Instead, we wanted to dig deeper into the question of what is sanskaar? We live in a country where people have different ideas of what Indian culture actually is.”

Also read: Stop Making Babies – A Movement That Wants You To Take Consent Of The Child Being Conceived 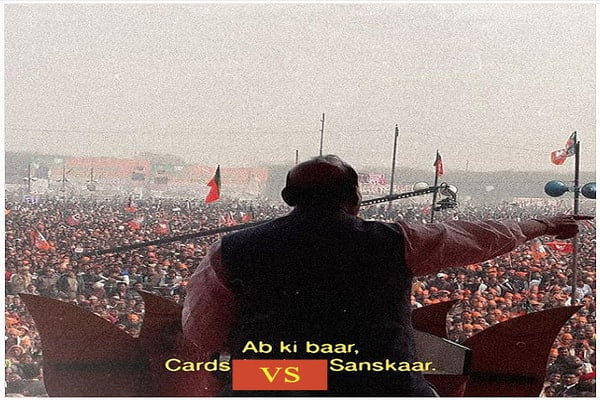 Consideration of the name Cards vs Sanskaar

The name Cards Against Humanity received undivided legal attention. Thus it was changed to Cards vs Sanskaar. Before settling for that, the team at Stawdio came up with 47 other meme-worthy names guaranteed to tickle your funny bone.

Cards vs Sanskaar are back in action

The team launched successful crowdfunding in December 2018. And now, the game in a different, tadakta-bhadakta avatar is back in the market this April with a pre-booking option. Buy before it gets banned!

If I were one of the co-founders, I would make it a point to keep my armor ready and an ax drawn for a battle with the offended parties just in case.

We don’t need another death like Ned stark or a visa to Pakistan, just yet.

4 Latest Wall Shelves Design You Must Consider For Your Home