Home Politics Can The ‘Left’ Ever Be Proven Right Again? 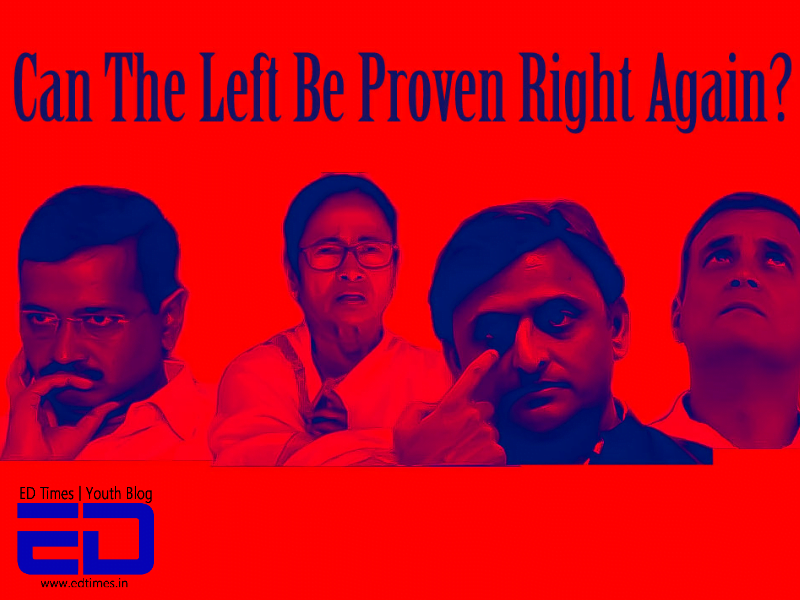 Pre Script– When I say ‘left’, I include every party that’s not ‘right’ (pun intended; or not).

Disclaimer– Everyone who is personally aware of my existence or have probably read my previous articles,  would vouch for the fact that I’m not a Bhakt. If you don’t believe me, I’d say I’m a Muslim. The point here is, I’m not a part of ‘modia’ or paid member of BJP IT cell, so when I say I BLAME the opposition for this massive victory of BJP despite its several blunders, believe me.

When Modi Government came into power, the mandate was clearly based on the huge disappointment that Congress proved to be in the UPA-2 regime.

Here’s listing a few of the numerous blunders of the opposition in the past five years that gave bhakts their slogan- ‘If not Modi then who?’

If there’s anyone more obsessed with Modiji, than the opposition, it’s Modiji himself.

The opposition as a whole created it’s entire political agenda to defeat Modi rather than focusing on the needs and the upliftment of the country.

Honestly, nobody wants a cry baby as their Prime Minister that does nothing but keep obsessing over its opposition. I’m not talking about Sambit Paatra.

Worthy parties that stood a chance in the general elections like AAP in Delhi or CPI(M) in Bihar were not contesting to win, but rather contesting to defeat Modi.

If PM had to really credit anybody for his massive figure in politics, it has to be the opposition that stopped focusing and chalking out its own agenda and gave him the limelight.

2. Lack of a face of the opposition

Admit it, if you haven’t already; that a ‘Gatbandhan’ was a disaster merely because each of the parties looked like a dozen different varieties of dal used to make a ‘khichdi’ that one could barely swallow.

The coalition of the opposition failed to overcome its own difference in various states where candidates were competing against each other rather than BJP, leading to a clear division of votes that could have been easily avoided.

Most of all, I’d ask you what Arnab Goswami doesn’t stop asking,

If not Modi then who?

People couldn’t find trust in the faceless opposition that was caught up in its internal drama.

Even if the people would have wanted to turn to better options than Narendra Modi or Rahul Gandhi, what did the local parties have to offer- Mayawati or Mamata? No thanks.

The opposition needed a strong face which it still fails to find.

Although Mamata Banerjee is anything but left, ignoring her role in the defeat of the opposition would be a blunder that I’m not ready to commit.

The statements made by Didi, whether it is regarding the ‘Jai Shree Ram’ slogans or how people living in Bengal must speak Bengali bear the consequences that Didi cannot afford in times like these.

Statements like these reflect a strong desperation in the opposition to defeat Modi; which brings me back to my first point.

This dates back to the time when Congress was in power and failed to sing songs about its glory and nationalism. A ten year tuition from BJP should do the needful.

The NYAY scheme, as mentioned by the Congress in its manifesto, should have been able to reach to the masses and the economically weaker section,  which it did not.

A lot has already been said about dynasty politics so I’d rather not. Just here to remind the opposition that India has a population of 1.3 bn, it shouldn’t be that difficult to find worthy leaders that are not blessed with a minister momma.

If the opposition is planning to win anytime in 2024 or 2050, it’s time for some brainstorming and a REAL plan rather than slamming BJP with childish slogans.