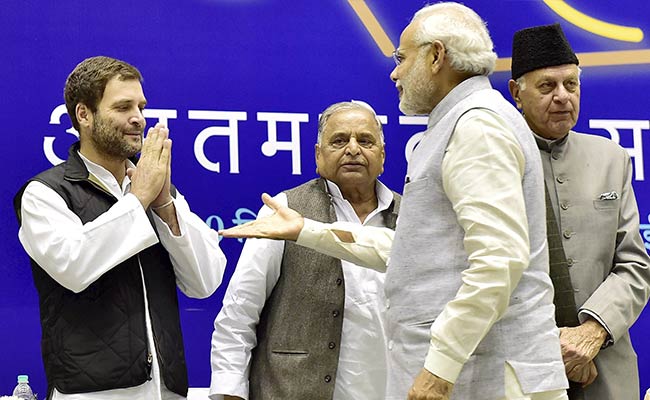 Disclaimer: If you think politics is stupid, then I just might give you more reasons to believe so.

What’s wrong with India? What changes do you want in the country? Except Salman Khan getting married and India winning the World Cup in cricket, what do you really want?

If you thought that the country needed to do better in terms of economy and development, let us first take a look at the people who have the responsibility of doing that.

Here are the stupidest political attacks and jibes parties took on each other, so that you decide for yourself.

1. When AAP challenged the credibility of the EVM’s

BJP’s victory in Uttar Pradesh civic polls was a little too much to handle for AAP; to the extent that they called the EVM’s tampered.

Their logic was that BJP won only where EVM’s were used. How did people take it?

Well, they made jokes and memes like they make out of everything.

AAP wins : Modi can only hack EVM, not ballot paper.

I actually don’t know why people were shocked when Mani Shankar Aiyar, the Congress official made the neech aadmi comment. Why? Well, this is what he has said in the past.

What else do you expect from him? Well, another controversy for the nation to talk and laugh about.

Also read: North-East Elections: How Important It Is For BJP To Win

While we expect our country to develop and grow, we can’t ignore the fact that social media is a part of it and our netizens know well how to use it.

Congress mocked the P.M.’s ‘hugplomacy’ through a minute long video uploaded on Twitter where he is shown hugging the world leaders. The video is filled with sarcastic comments over the P.M.’s hug diplomacy.

Maybe the opposition is obsessed over Modi. Maybe they are trying a hand at humor.

What do people think?

The earlier P.M. didn’t even talk, the current gives free hugs. This is how politics teaches science. Law of balance?

4. When Congress and BJP made ‘only videos’ out of beef

How can you not mix beef with politics in India? Of course, I won’t know the taste of it, I am a Hindu Brahmin.

Siddaramaiah led Congress govt has been the most anti-Hindu Govt in the history of K'taka. CM himself has repeatedly boasted of his anti-Hindu image. But of late, he has been trying hard to prove his Hindu credentials. But it is too late Mr. CM . Start packing your bags! pic.twitter.com/vdT9BTfVcL

It went on to add, ‘Parrikar wants to import it, Yogi wants to export it, Rijiu wants to eat it, some want to sell it.’

Parrikar wants to import it, Yogi wants to export it, Rijiju wants to eat it, Som wants to sell it.

Do not mix Beef and Business. Mixing Beef and Politics, a definite YES!

Enough of your hypocrisy @BJP4India pic.twitter.com/f6DMDzreOi

While citizens starve, our politicians are still busy over beef.

How to get out of a comment aimed at you?

Make another on the same pretext over the one who aimed.

Learn the art of comeback from our political parties, and how.

BJP has claimed that the Congress chief wore a jacket worth Rs. 63, 000 to a concert in Shillong. “So @OfficeOfRG, soot (pun intended!)-boot ki sarkar with ‘black’ money fleeced from Meghalayan State exchequer by rampant corruption? Instead of singing away our woes, you could have given a report card of your inefficient govt in Meghalaya! Your indifference mocks us!,”

They also tweeted the image of a similar jacket that Rahul Gandhi was seen wearing at a concert in Meghalaya, with a price tag which amounts to Rs. 63, 000.

Congress leader Renuka Chowdhury said, “Those who wove (their) own name on suit, do they have any moral authority to question Rahul Gandhi’s jacket? How do they know rate of the jacket? I will show the jacket can be bought at Rs. 700. What will they say then?”

Yes, the ruling party and the prime opposition party discussed the price of a jacket, that long and to that extent.

Because the nation wants to know how Rahul Gandhi bought a 63, 000 rupees jacket for 700 bucks only.

Though it is good to see the parties get into debacles and the opposition acting as a watchful dog, what we as citizens really want is that these debates should be constructive and not a series of stupid and unnecessary political jibes which are helping no one.

Why Does Our Vulnerability Allow Us To Wear A Social Mask And Cover Our Real Self?