In today’s time it is perfectly fine to get overwhelmed by the many problems we millennials face.

Sometimes they can get too much and our first thought is usually to just to put an end to it as soon as possible.

For some time there I too thought like this and those irritating motivational quotes of ‘don’t stop’; ‘keep believing’ used to really get on my nerves, especially the ones that told me to never quit no matter what.

However, the anonymous graffiti artist Banksy’s quote of “If you get tired, learn to rest and not to quit,” was one of the few ones that really resonated with me.

For the first time really someone was acknowledging my troubles and problems instead of just dismissing them. But instead of just being a meaningless pep talk, this quote actually gave me a solution.

While recognizing my issues the quote told me to rest instead of just quitting at the first sign of trouble.

It really hit home to me as it accepted that it is alright to get tired and want to just give up everything. That there is nothing wrong if we do feel like that, but that does not mean to quit altogether.

Rather than that, take a moment, take a break (take a Kit-Kat…sorry… bad pun) and take some rest. It will only help us to gather back our energy to once again start the difficult journey.

Read More: Breakfast Babble: DU’s High Cut Offs Are Not Worthy Of What They Offer In Return To Students 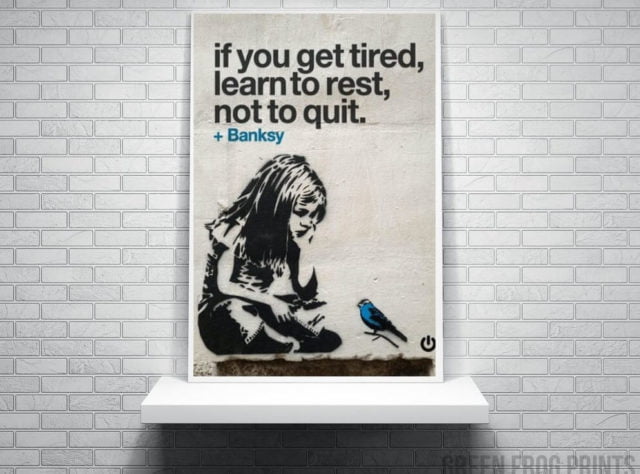 These days I’ve been noticing a lot of people around me, some my own age, some even a little younger, wanting to give up as soon as a problem comes up.

This is not to say that quitting altogether is wrong, no, rather it is a sign of a mature person who knows when to quit something.

But it should also not mean that at the first sign of trouble we can just put up our hands and call it a day.

I feel like this mentality that allows one to rest while accepting their hardships yet at the same time encouraging them to not quit so easily is something we really need currently.