The natural occurrence of life, nature and the mysteries around them is beyond human imagination. However, the recent advancements and experimental approach pursued by humans in understanding nature has left the world awestruck.

Science is progressing like never before in today’s world. Everyday a new discovery is made, a new phenomena gets unraveled. 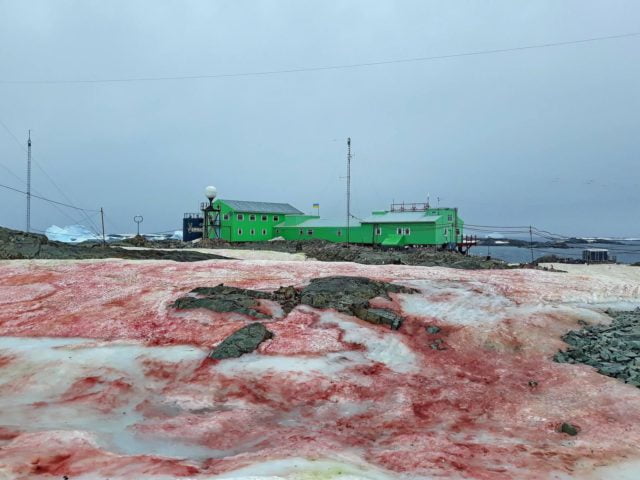 What Is The News?

Ukrainian scientist and biologist Andriy Zotov was the first one to share pictures of the red snow from the Antarctic region. Soon after that, the pictures went viral all over social media and got people concocting their own explanations for the spooky occurring.

The Ukrainian Ministry Of Education and Science also shared these images on Facebook and caught a lot of attention over this strange occurrence. Reportedly, the red snow started showing up abruptly in the past few weeks around Ukraine’s Vernadsky Research Base. It was very recently that it got noticed and now the world is witnessing the spooky snow in the northern part of the Antarctic peninsular region.

Although the red coloration of snow is a rare occurrence in the conventional world, the great Greek philosopher Aristotle predicted it centuries ago. In his book, ‘History of Animals’, Aristotle mentions, “Living animals are found in substances that are usually supposed to be incapable of putrefaction; for instance, worms are found in long-lying snow; and snow of this description gets reddish in color, and the grub that is engendered in it is red, as might have been expected, and it is also hairy.”

Since the release of such unusual visuals, the world has been going gaga over the usually pretty white snow looking so deadly in appearance. People are crying the call of climate change and holding global warming responsible for the spooky ice shed.

Riyaz Hanfi, a Facebook user wrote, “Now Weather Alarming to whole IGenie Worlds Do not disturb me otherwise ready to pay. We don’t want such development which standup straights in front of you like waste material. go back 30Yrs we earn 40% from Nature today only at 8% that is the results of such things.” (sic) 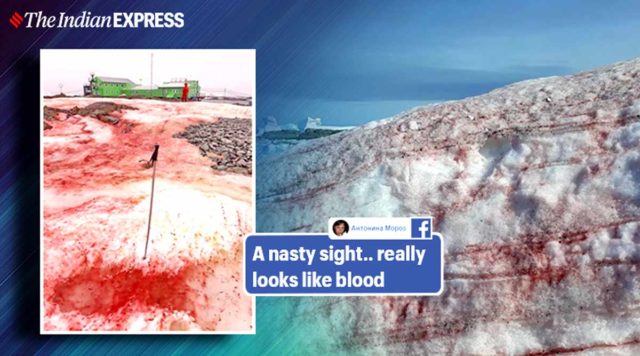 Another user wrote on Instagram, “THIS IS DEVASTATING!” snidely commenting upon the politicians who ignore real issues and focus only on public stunts.

A Twitter user shared the same images with the caption, “Shocking Images of Antarctica’s Blood Red ice are an ominous sign of climate change as water around the icy continent is increasingly heating up Mike Hudema.” (sic)

While someone tried to give the creepy situation a fancy perspective explanation and posted, “Snow has taken on a sinister-looking blood red color at a Ukrainian research station due to a type of algae which contributes to climate change.”

The Ukrainian Ministry of Science explains the occurrence as a natural algal blooming phenomenon and was backed up up by fellow readers commenting, “That ‘blood’ or ‘jam’ is actually a type of red-pigmented algae. The algae thrive in freezing water and spend winters lying dormant in snow and ice; when summer comes and the snow melts, the algae bloom, spreading red, flower-like spores.”

Also Read: In Pics: Some Young Unknown Greta Thunbergs Who Are Doing Some Amazing Climate Change Work Too

What Do Scientists Say?

There have been speculations made all over the Internet that classifies the strange phenomena varying between an alarm of danger or a natural harmless occurrence. 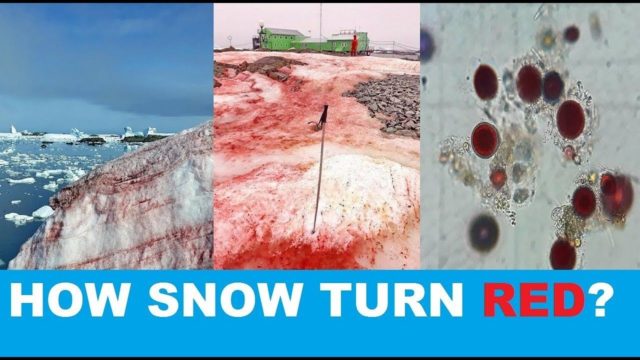 Scientists explain the spooky ice presence as a natural phenomena involving the activity of algae Chlymadomonas nivalis that thrives on freezing ice. The red colored algae grows under deep ice and when it blooms inside, a blood red appearance is captured from outside.

They further rationalize the phenomenon by saying, “Because, besides green pigment – chlorophyll, their cells also contain a red carotene layer, red spots occur on snow as if from raspberry jam.”

It is to be noted that these typically green algae get a lot of sun during the summer and start producing a natural sunscreen that paints the snow in shades of pink and red. In the winter months, they lie dormant. Thus, the visibility of the red color starts during early summer.

Although this algal bloom does no direct harm to the climate, it does alter the rate of melting ice which consequently is making the Antarctic glaciers melt faster than normal.

They refer to this phenomena as ‘watermelon snow’ in layman science- not only because of its color but also because it radiates a pleasant fruity aroma like that of the summer fruit.

This is not the first time such an occurrence has taken place. A similar colored sea foam was washed along the sea shore along the Spanish city of Tosse De Mar in early January 2020 which was considered a natural occurrence as well.

Thus, linking watermelon snow with adverse climate change consequences is still debatable until a solid research is done on the same.

UAE Plans To Bring In Rainstorms And Fresh Water By Dragging An Iceberg To The Gulf!