It has been more than two months since the country has been protesting against the undemocratic and unsecular Constitution Amendment Act (CAA).

Under the Constitution Amendment Act, the minorities who faced religious persecution in their country have the provision to avail Indian citizenship whereas the minorities in India need to prove their citizenship and failure to do will send them into detention camps.

Such a law has invoked nationwide protests and people are showing dissent against the CAA demanding its withdrawal. So far things have taken an ugly turn and violence is the new normal when it comes to anti-CAA protests.

The recent and the most horrifying one took place in North-east Delhi which has reportedly claimed 39 lives and section 144 was imposed around the area.

Following the same, the High Court has issued a notice in response to pleas to some of the most influential left-wing leaders who have been very active in these anti-CAA protests.

Who All Are Targeted?

The High Court heard several pleas on Friday, 28th February 2020 while investigating the case around ongoing violence in the national capital.

A bench of two elite judges, Chief Justice D N Patel and Justice C Hari Shankar made hearings over the Delhi riots and considered pleas made against prominent left-wing leaders.

The plea was put forward by Ajay Gautam under the Unlawful Activities (Prevention) Act that urges to register an FIR against the opposition leaders for provoking anti-Hindu riots in Delhi.

Another plea was filed by Sanjiv Kumar seeking a National Investigation Agency (NIA) to take charge of investigating the Delhi violence case. He has filed a probe against social activists Harsh Mander and an FIR under against RJ Sayema, Swara Bhasker and others. 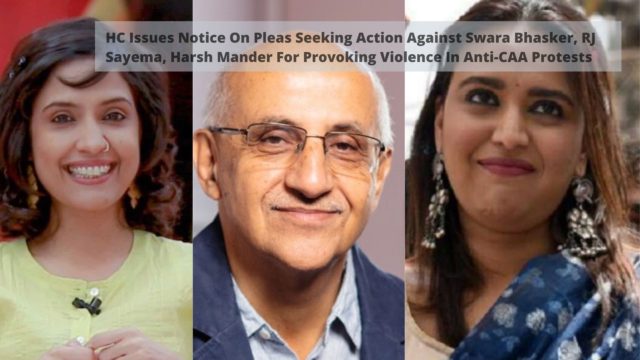 The blame was put on these public figures over their anti-CAA activities and opinions displayed on the social media which consequently provoked violence.

Horrifying and heart breaking!!!!!! These are the tragedies that happen when the state and law machinery abdicates it’s responsibility and leaders give provocative speeches.. this is on you #KapilMishra #ArrestKapilMishra https://t.co/rmyuVUovDN

While RJ Sayema, a popular radio jockey who actively shows dissent against the CAA over social media was blamed for instigating people against the government.

Hey @RadioMirchi, please clarify if this is your official stand. If not, immediately sack this Bigot organising mob for violence.

What Was The Petition All About?

The petition filed by Ajay Gautam was given utmost importance in the courtroom. It hints that the anti-CAA protests are a sponsored conspiracy by the left-wing that aims at bringing anarchy and chaos in the nation.

“It is not a normal protest; it is submitted that anti-national and Anti-Hindu forces are behind these protests and some vested interests/parties/countries are funding these protesters.”

Also Read: Who And What Started The Violence During Delhi Riots?

Not only this, further on he subtly defends the CAA and targets the active leaders of the anti-CAA protests charging them for provoking protestors and sponsoring violence.

The key points of his petition include the evacuation of Anti-CAA protestors, investigation of anti-national forces behind these protests, registering cases against Waris Pathan, Asaduddin Owaisi, Salman Khurshid and other persons for involvement in the alleged provocation of protestors and action against those who posses a threat to the wellbeing of the PMO.

As a consequence of these petitions, the High Court has sent a notice to the people named by these petitioners to have invoked Delhi violence and a thorough investigation will be done by higher authorities.

The application put forward by Sanjiv Kumar made deductions around the Delhi riots and concluded, “The plan was the total siege of Delhi by creating numerous sit-ins like Shaheen Bag and on the given day and time (in between 24th February and 25th February 2020), blocking of roads and airport, thus taking control of vital roads and airports, trapping the President of USA in Delhi, creating an impossible situation, forcing Army to take control (US Army would too have jumped in) and in that situation, there will be world media attention on India. The plan of this Urban Naxal group was to defame India, to paint India as a failed state.”

Due to such strong claims, the pleas were taken into serious consideration and immediate action was taken by the court. The court also announced its next hearing date around this case to be 30th April 2020, and until then a critical investigation will be done.

With no robust proof attached to validate the claims made in the petitions, all we can do is wait for an official statement by the investigators to give us clarity over the real faces behind this bloodshed.

If These Recent Incidents Of ‘Extreme Intolerance’ During CAA/NRC Protests Are Not Chilling To You, I Don’t Know What Will Be