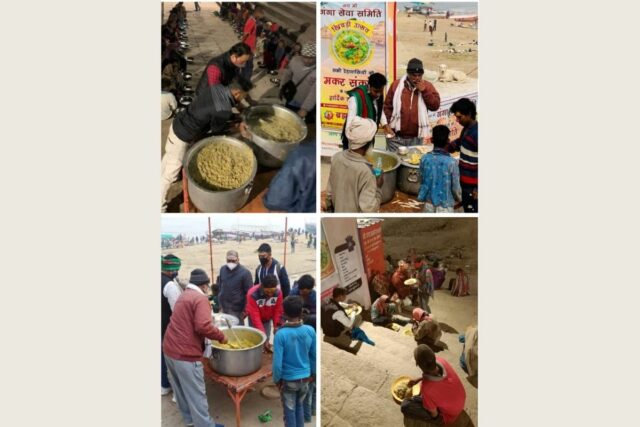 January 17: Leading social worker Sachin Mishra (Sanatani) According to the belief in Sanatan Dharma, today’s donation on the holy festival of Makar Sankranti is such a work, through which we are not only able to follow the religion properly but can also get out of all the problems of our life. Huh. For life, protection and health, charity is considered infallible. To get rid of all the problems of life, the charity has special significance. By donating, it becomes easy to get rid of the sufferings of planets.

The person who donates food regularly every day gets all the fruits of the world. Some food donations must be made according to one’s ability and convenience. This leads to the attainment of ultimate welfare. Especially the donation of food is a factor of respect in life. Therefore, one should donate food to the needy; by donating food, all sins are avenged, and happiness is attained in this world and the hereafter.

According to Skanda Purana, food is Brahma, and everyone’s life is established in food.

So it is clear that food is the mainstay of life. That’s why food donation is like giving life. Food donation is considered to be the best and virtuous. No chanting, austerity or Yagya etc. is complete without the donation of food in religion. Food is the only thing that satisfies the body as well as the soul. That is why it has been said that if you have to donate something, then donate food.

Donations should always be done with their own will. Donation done under any pressure never gives auspicious results.

It has been told in the Anusanaparva of Mahabharata that when Duryodhana, Karna and Shakuni snatched the kingdom of Yudhishthira in gambling by deceit and the Pandavas were going to the forest with Draupadi, at that time the subjects and Brahmins also went to the forest with them. Started. Seeing this, Yudhishthira was very sad and he started thinking that how will I be able to feed all this in the forest. Everyone fills his stomach, but the life of only one person is successful, who can feed his family, friends, guests and Brahmins. Yudhishthira told those brahmins that I have to spend twelve years in this uninhabited forest, so tell me any such way so that food can be arranged for you along with my family.

Sai give so much, jame family time

Then among those brahmins, Maitreya Muni, while narrating the story of Draupadi’s previous birth, said to Yudhishthira- ‘Nothing is rare where Lakshmi-form Draupadi is living. Draupadi can satisfy the world with the food of her sthali (batloi, the vessel in which food is cooked).

There is no end to the glory of charity. There is no one like Karna in the world in the form of a donor. A proverb is clear about charity- earn from policy spend way, Donate with love.

Making the same thing true, the members of Ganga Seva Samiti and Brahma Rashtra Ekam, in the spirit of service, have been continuously donating food to the poor and hungry at Assi Ghat, which started during the Corona epidemic. In which thousands of hungry are fed every day after Ganga Aarti. Shri Balram Mishra, Shravan Mishra, Yash Chaturvedi, Abhishek Golu, Vikas, Satyam on behalf of Mother Ganga Seva Samiti and brothers Sachin Mishra (Sanatani), Priya Mishra, Kushagra Mishra, Nripendra, Santosh, Sujit and Rajani on behalf of Brahmarashtra Ekam We are continuously giving our services.