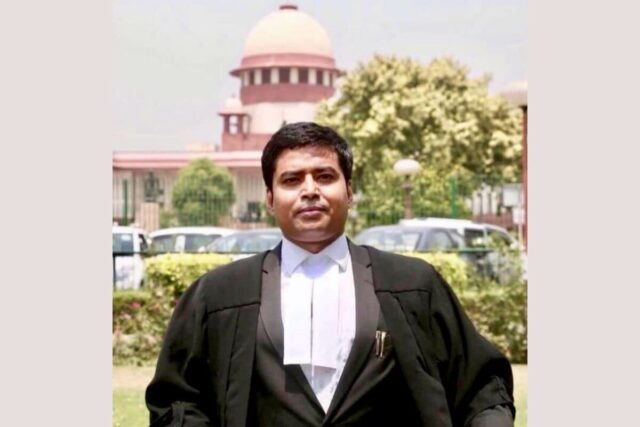 January 22: Gold medalist from Campus Law Centre, Delhi University, Advocate Alakh Alok Srivastava has always been into the spotlight since he started his litigation. This ace entrepreneur is also a First Generation Lawyer and works as Advocate-On-Record, Supreme Court of India.

It is interesting to know for a fact that he was not initially into litigation. He got selected into Hindustan Petroleum Corporation Limited as a law officer soon after his graduation in 2012 and started working there as a law officer.

Advocate Srivastava told us that it was a chance encounter with former Chief Justice of India SH Kapadia that led him to quit a well-paying law officer’s job in the government sector and join the litigation.

He recalls- “Justice Kapadia had come to the Indian Law Institute convocation in 2012. I was the topper that year. While giving me the gold medal and certificate, he told me that young people like me should fight for the marginalized sections of the society,”

Advocate Srivastava quit his job as a law officer in Hindustan Petroleum Corporation Limited soon after. In 2014, he started his own practice. As he started the litigation he chose to do more and more pro bono cases concerning the society. Not soon after his name got synonymous with social cause public interest litigations (PILs). He reached great heights in his litigation but did not forget his roots and the cause why he came into litigation.

The most important PIL of his life has been the one through which capital punishments were amended to be granted as a punishment for rape against minors. As a result of his PIL in 2017, the cabinet ministers amended various provisions of POCSO and included capital punishments in the sections. Advocate Alakh Alok Srivastava had filed the PIL in his personal capacity seeking justice for an eight-month-old girl who was brutally raped by her 28-year-old cousin in Delhi.

“I read about the case in newspapers and went to see her. It was a heart-wrenching experience. Her parents are daily wagers and could not afford her treatment. I decided then that I will move to the Supreme Court seeking justice for her. The only punishment for a crime of such depravity can be death,” shares Advocate Alakh Alok Srivastava.

Following his PIL that the SC set up a medical board to examine the girl and directed the concerned authorities to ensure proper treatment. The girl survived due to his intervention and her family can’t thank him enough.

Even today Advocate Alakh Alok Srivastava is always keen to take up cases concerning social strata to the Supreme Court of India. He takes up these case PRO BONO (free of cost). Recently put up PILs concerning migrant workers and their rights which also gained appraisals from around the legal fraternity.

He is always ready to take up cases of brutality against women, especially minors, and fights them with conviction. Few months back a couple had set themselves on fire at the premises of the Supreme Court and even this incident was out up to the court in the form of an application by Advocate Srivastava himself.

It is a general notion that advocates are bad and stone-hearted people. This notion is broken by Advocates like Alakh Alok Srivastava. We need more advocates like him who can work for the social upliftment of society.