Social media platforms such as Twitter and Facebook have already been facing criticism for being biased to particular ideologies on their platforms. The nature of how content is moderated on these sites to identify insensitive and offensive information and hate speech has been questioned.

Earlier this morning, an account by the name True Indology, under the handle @tlinexile, was suspended on Twitter. Many Twitteratis are enraged that this curbs freedom of expression and are blaming IPS officer D Roopa Moudgil for the same. They are demanding an explanation from Twitter for the suspension of the account.

When did it all start?

The suspension seems to be a consequence of the ongoing debate that Indians engaged in recently regarding the ban on crackers during Diwali.

While many such as Moudgil, the first lady IPS officer in Karnataka, supported the cause since it was an effective measure against rising pollution, many Indians were upset about the ban. 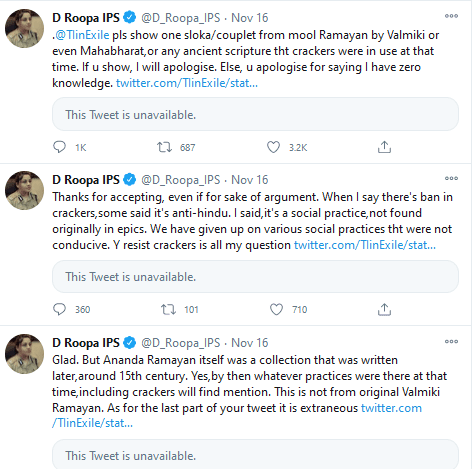 On November 15, Moudgil wrote an article in the Times of India, questioning and criticising why people had a problem with the ban on crackers. She elaborated that the ban was in the best interest of the people, as there were predictions that Delhi and Bengaluru would be the worst hit by pollution and smog.

https://t.co/WmGb416WEI
My contemplative piece on crackers, the govt ban and people's behaviour

She was also critical of those who were vouching for crackers. She explained how it was never mentioned in any scriptures and was particularly dismayed by young people taking the ban as an offence on religious sentiments.

There's a basic flaw in making everything abt Hindu religion. Insist on banning other unhealthy things during other festivals. But tht can't be a reason to oppose everything in name of protecting Hindu interests. Sati/untouchability wud've never been done away with such thinking https://t.co/DZ1Fv2blia

Agree with your last sentence. Selectivity is the problem. Uniformity required. But what is selective is a matter of perception. Somewhere some beginning has to be made. https://t.co/5xMKLJCOYp

People were offended by the observation that the government was ‘selectively’ imposing rules against Hindu festivals.

I had voluntarily given up bursting crackers for almost 20 years. But, fed up with selective outrage only during Hindu festivals, I used them again 2 years back.

And guess what, I'm not alone.

We all must understand that crackers cause air pollution during other occasions also!

What was the debate about?

Also Read: How Diwali Is Equally Shared By Hindus, Jainas, Sikhs, Farmers As A Festival

The account tried to argue that firecrackers were a part of Hindu culture while the officer argued that crackers came to India only after colonialism.

However, there were also people who praised the officer for winning the argument.

Twitter is now storming with the hashtag #BringBackTrueIndology. It has grabbed the attention of comedians as well, who are being satirical about the entire situation.

Even Kangana Ranaut has responded to the issue.

You are a hero @TIinExile , at times the fight for civilisation feels like a lonely and thankless battle, to see the organised power of the other side can make one disheartened but keep at it, one day you will be a leading voice, my love and blessings #BringBackTrueIndology https://t.co/Fh3yqbC9Bq

People are arguing that the account was mindful and truthful about the facts that it endorsed about Hindu culture, however, there are also those who are critical of it for endorsing religious outrage against a ban that was solely imposed for the cause of protecting the environment.

One can argue that the officer might have blocked it solely because the account was spreading misinformation and instigating religious intolerance among people.

Twitter has many people who support the right-wing ideology and take minute offences against any information that threatens a majoritarian religion.

However, which institutions and people in power get to decide what content gets to stay on social media platforms since India does promise freedom of expression in spite of the kind of views being expressed?

Here’s What Shashi Tharoor’s Book, ‘The Battle Of Belonging’ Has To Say About Hindutva Movement