31st January 2015: The film fraternity took to their seats to witness the biggest award night of Indian Cinema. Red Carpet! Glamorous Actresses! Suited Actors! Comedian Hosts! Best of Performances! 6 decades of Fimfare! And the most coveted BLACK LADY! 2014, a year full of surprises; divide between critically acclaimed films and commercially gaining films fading away. And so were low budget and co-production films winning hearts as well draining pockets of the masses.

60th Filmfare Awards took place to celebrate the films and work of 2014. The ‘black lady’ was again ready to decorate the showcases of the biggies of Bollywood. By the end of the award night, it was easily visible that it was the year of the “QUEEN”. Breaking the general trend of last quarter films making large, QUEEN, one of the initial 2014 releases took away the maximum black ladies. “Haider” followed in line with 5 ladies in its kitty. The major awards for the day were bagged by these two films. Haider a film which lost in numbers to Bang Bang yet managed to stir the audience emotions and won the popular choices. Queen, coming of age film, with no lead ‘ACTOR’ stole the hearts with Kangana’s innocence. Though Kangana, wasn’t present at the award show, I am sure her happiness to receive her first Filmfare for Best Actress couldn’t have been matched.  And so did Shahid bag his first Best Actor in the Filmfare. Looks like only Vishal Bharadwaj can bring Shahid always back in the game. KJo and Kapil Sharma were the hosts for the night. Kapil Sharma with Karan Johar is sure to have raised the bar of hosting. We can just wait for the telecast to see how they cracked up the viewers. Witty one-liners and comic timing of these two are world famous with Koffee with Karan and Comedy Nights with Kapil. The performers for the day included Ranbir Kapoor, Arjun Kapoor, Varun Dhawan, Alia Bhatt, Shraddha Kapoor and Salman Khan. Yes! Salman Khan as we all know broke his record for not attending Filmfare for 15 years last year and yet again this year, we saw him dancing to the beats on the stage. Enjoying himself in impromptu acts, Dabanng Khan was having a gala time. One of the pictures that have caught everyone’s eyes is Deepika’s Jumma act. The telecast can only tell how and why did Deepika go up the stage. But the whole image of Deepika with boys chewing her dress puts us in laughter. Some of the candid and award receiving pictures from the 60th Britannia Filmfare have raised the expectations. 8th February 2015 at 8 pm on Sony TV, most of us will be glued to have a look at the dazzling performances and listening to the winning speeches. Till then, have a look at the awardees list and notice for yourself how popular the ‘DIFFERENT’ is. 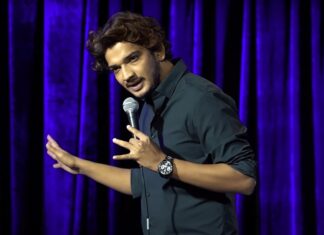 Kushan Niyogi - November 29, 2021
Comedy is a murky sphere in India. It can lead to a barrage of debacles with an entire crowd of fundamentalists baying for blood...