The Game Of Thrones Season 7 fever doesn’t need much emphasizing. With the advent of Season 7, it is all people are living, breathing, eating and dreaming. George R.R. Martin’s “A Song of Ice and Fire” that is now the immensely popular book-turned-TV-show “Game Of Thrones” has got to be one of the most popular things of the modern era.

The only reason I called it ‘one of the most’ is because, well, Harry Potter. Yes, incurable Potterhead here.

Those of us who have read the books already know everything and by 2018, all of it will be laid open and bare in front of us. But, what fun is a series if you don’t read between the lines and invent your own story out if it? Hence, to do justice, I has come up with some of the whackiest fan theories ever.

1. Jon Snow is the Prince Who Was Promised

Theory: Jon is the reincarnation of a powerful, long dead prince. Evidence: Melisandre is the main proponent of the theory that there is an all powerful prince who will eventually defeat the Others, and help bring peace to the land.

She had both herself and Stannis convinced that he was the chosen one, which didn’t exactly turn out well.

The most obvious candidate is Jon, but he is currently lacking a flaming sword which is a major part of the prophecy. This is one of the most hotly debated topics among the book readers in the GoT universe.

Also read: Jon Snow’s Sword Is Made Here In India And It’s Right In Our Backyard

2. Jamie Lannister will Kill the Love of His Life

Theory: Cersei has been terrified of the wrong brother all along. Evidence: Interestingly it was cut from the show, but in A Feast for Crows, when Cersei recounts her meeting with Maggy the Frog she also explains that she learnt how she will die. Her younger brother – valonqar – will choke her to death with his bare hands. Part of her resentment towards Tyrion is borne from her fear of him.

However, Jamie came into the world “holding her by the ankle”, and they’ve rarely been separated since. Jamie too seems to be tiring of her antics and must hold her accountable for the death of at least one of his children.

3. Jorah will be Saved by Unicorns

Theory: Unicorns are known for their healing properties of the fatal disease, greyscale. Evidence: A Redditor came up with a theory that would be incredible if it turned out to be true. Daenerys has sent Jorah on his own quest to find a cure for his fatal disease, greyscale. What mythological creature is known for its healing properties? The unicorn!

In the books, the Northern island of Skagos – ruled by House Stark – is thought to be the home of unicorns. Also, Skagos isn’t too far away from Bear Island, where his family, the Mormonts are stationed. Sort of makes sense, right? Evidence: One fan on Reddit has tried to deduce what Ned’s dying sister Lyanna whispers after giving birth to Jon. Though quiet, “His name is” can be heard, but the rest of the sentence is inaudible.

However, by reading her lips the user reckons she says a name that starts with a J and is three syllables long. “The name is not included in the captions, probably on purpose”, speculates the fan. The name is probably Jaehaerys according to the Redditor.

5. The Whole Story is being Written as We Go along by a Maestro in the Library

Theory: Game of Thrones might just do a Two And A Half Men thing.

Evidence: Okay. Read this carefully and very patiently. If required, re-read it.

In the season 6 finale, we noticed an object that looked very similar to something we see in the opening sequence as Sam first looked inside the library at the Citadel: an astrolabe, the device contains VERY similar winding metal bands like those we see during the intro, with the sun in the middle.

The Maesters at the Citadel are known to determine when seasons officially end and begin, sending out white Ravens to make the announcement known. So, this is probably what that globe is used for.

When Sam arrives at the Citadel, a Maester greets him wearing a pair of spectacles. When you look at the credits again, it seems that someone is viewing them through lenses. 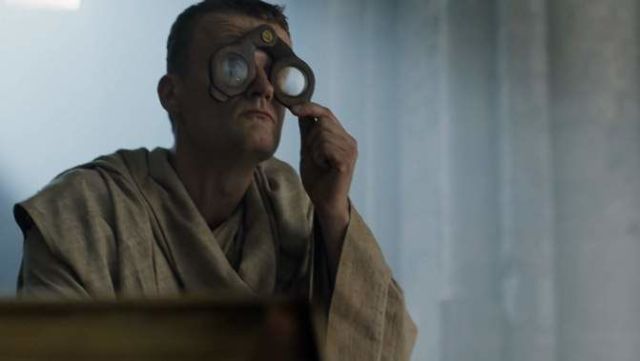 The Three-Eyed Raven told Bran that “the past is already written”, implying that all the events we’re seeing have already taken place and are just being retold. Perhaps the final ever scene will be an old Sam looking up from his book?

Plus, George R.R. Martin has compared himself to Sam. When asked what character he’s most like in 2014, he said: “I would probably be Samwell Tarly. I love Sam, too. He’s a great character.”

Do you have any other whacky theories on your mind which are very likely to come true? Do let us know in the comments section below!

Here Are 5 Bahubali Fan Theories To Mess With Your Head!

Reviews Brand Voice - September 23, 2021
September 23: Noted actor Subrat Dutta has bagged the BEST ACTOR AWARD at the 6th DIFF for his intense portrayal of the character of Josef in...