Home Finance Why Is The Government Planning To Ban Cryptocurrency When #IndiaWantsCrypto? 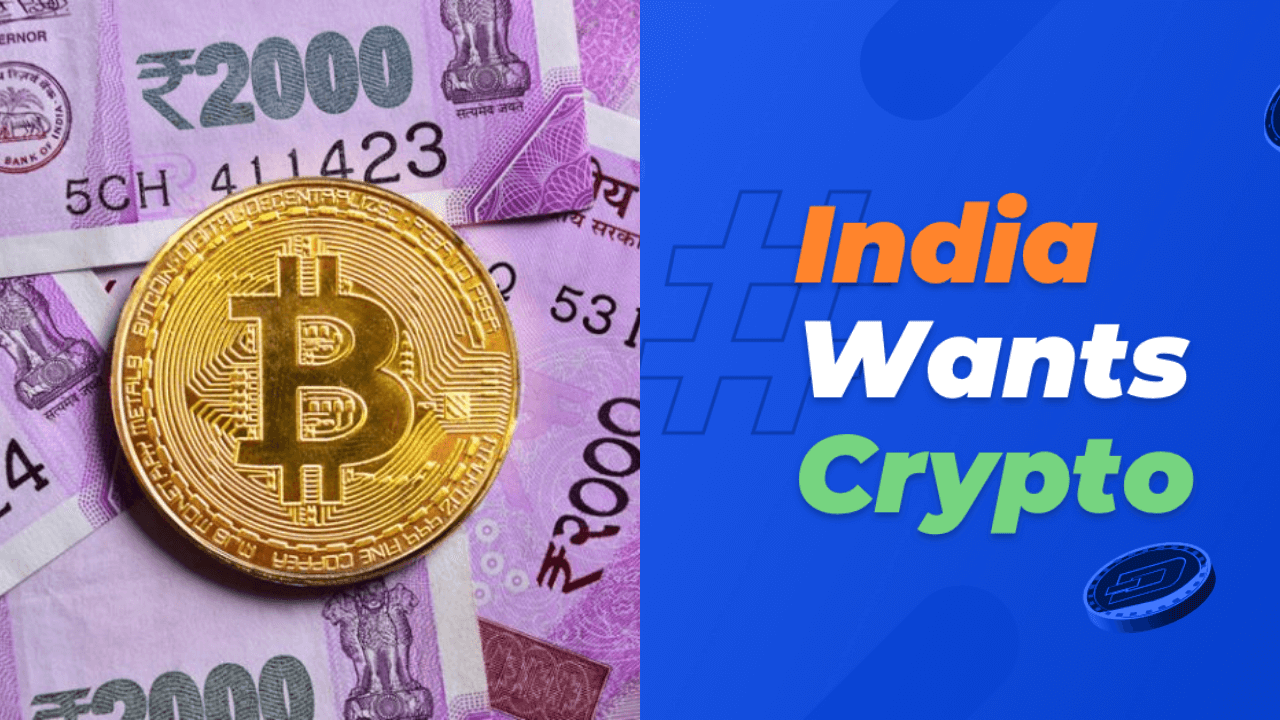 The government is likely to put a ban on cryptocurrencies soon. It is being reported that a bill will be introduced that will make all activities related to cryptocurrencies like mining, trading, holding, selling, investing, transferring, and using cryptocurrencies illegal. If the bill becomes a law, defiance will lead to imprisonment, a fine, or both.

According to reports, cryptocurrency investors will get a transition period for liquidating their investment before the ban kicks in.

In a previous article, I explored the possibility of bitcoin crashing completely, the problem of accountability, and the risks that come along with cryptocurrency as it is not backed by the world bank or the government.

Who would have thought that the Indian government would put an end to cryptos for those reasons, or is there more to the story?

Cryptocurrencies witnessed unprecedented growth in 2020 worldwide. One of the effects of the pandemic was everything being done over the internet because of the lockdown, which led to trading in cryptocurrencies growing drastically, even in India.

One of the major factors was also the Supreme Court’s ruling in March 2020 that struck down RBI’s 2018 circular which prohibited ‘regulated banking entities’ from offering their services to organizations dealing in virtual currencies.

By the end of 2020, Indians aged between 25-40 were spending millions on trading in cryptocurrency as reported by Livemint.

“According to the country’s largest crypto exchange, WazirX, the company saw 125% increase in user signups in the past six months, while its rival CoinDCX said it saw 85% growth in traders in the last quarter,” in a December 2020 article.

“Since the lockdown began in 2020, the volume of crypto trading in India grew drastically. By the end of December 2020, $60-65 million worth of Bitcoin trades were happening in the Indian region on an average, every day,” said Monark Modi, founder, and CEO, Bitex Technologies.

“Confidence of investors trading in digital assets is at an all-time high with Bitcoin surging over 300 percent in just one year. Financially aware individuals in India don’t want to miss out on the stellar returns offered by digital assets. BuyUcoin has witnessed over 700 percent increase in trading volumes between March 2020 and February 2021. Investors should continue their growth journey through strategic investing in digital assets,” Shivam Thakral, CEO, BuyUcoin.

Musk’s firm Tesla bought 1.5 billion worth of bitcoin that peaked bitcoin rates to $44,220. After his endorsement for Dogecoin, this cryptocurrency which started off as a joke, jumped 50% in value.

Even Jack Dorsey, Twitter Inc.’s Chief Executive, announced a trust fund with the rapper, Jay-Z, for bitcoin development with an initial focus on Africa and India.

Also Read: Will The World Shift To Cryptocurrency Since Musk Has Invested $1.5 Billion In Bitcoin?

Why Is The Government Banning Cryptocurrency?

The world has recently started getting a hang of cryptocurrencies. Terms like Bitcoin, Ethereum, Ripple, Litecoin have become known to everybody.

Pop culture has also adopted cryptocurrencies and with billionaires like Elon Musk in its support, cryptocurrency dealings were finally coming out of the dark.

Then why does the central bank doesn’t want cryptos?

The bill called “The Cryptocurrency and Regulation of Official Digital Currency Bill, 2021” is to be tabled in one of the budget sessions of the Parliament. According to the Lok Sabha secretariat, the bill will “create a facilitative framework for the creation of the official digital currency to be issued by the Reserve Bank of India (RBI). The bill also seeks to prohibit all private cryptocurrencies in India. However, it allows for certain exceptions to promote the underlying technology of cryptocurrency and its uses.”

Nirmala Sitharam, the finance minister of India said “A high-level Inter-Ministerial Committee (IMC) constituted under the Chairmanship of Secretary (Economic Affairs) to study the issues related to virtual currencies and propose specific actions to be taken in the matter recommended in its report that all private cryptocurrencies, except any virtual currencies issued by state, will be prohibited in India.”

“The bill is yet to be finalized. The form and manner of declaration and how existing holders of the cryptocurrency should dispose of it will be prescribed either in the law or through the rules to be notified later,” according to a finance ministry official.

Minister of State for Finance Anurag Thakur said that cryptocurrencies are neither currencies nor assets, placing them outside the direct regulatory ambit of RBI or the Securities and Exchange Board of India (Sebi). Hence, the government will bring a bill on the subject.

Crypto trading was well on its way to becoming a formalized sector as the cryptocurrency firms in India were starting to flourish. But these virtual currencies are not regulated by the government.

The shift from government-produced and controlled money to virtual cryptocurrencies will lead to greater independence from the Indian economy and hence the government sees it fit to ban it altogether.

But, is that a wise move? It is likely to push people towards illegal trading and hinder India’s growth in the realm of virtual trading.

Another reason is the possibility of India introducing its own virtual currency.

As all discussions about the bill only mention “private” cryptocurrencies, many experts are speculating that other forms of non-private cryptocurrencies might not be banned.

Even in 2019, the finance committee had suggested a ban on other cryptos and the creation of digital rupees.

The government just seems to want control over everything and since the crypto economy has established itself as a successful autonomous zone, free of government control, the government deems it fit to stop its growth.

The growing popularity of bitcoin and the ever-increasing value of cryptocurrencies is a testament to the fact that people are more than open to crypto trading.

Cryptocurrencies are independent of the government and the country’s economy, which means investing in crypto can prove to become a safeguard, barring the risks.

Naturally, many Indians have already invested in virtual currencies.

The three largest crypto-exchanges—WazirX, Unocoin, and CoinDCX—claim that there are anywhere between 60 lakh to one crore cryptocurrency holders in the country with holdings of over Rs 10,000 crore, in a report by Livemint.

People were not happy to hear about the ban and took Twitter to express their discontentment.

The investors are left with the difficult choice of whether to cash out or keep on investing as the bill is not official yet.

Nischal Shetty, CEO of WazirX started a campaign on Twitter called #IndiaWantsCrypto that was trending with thousands of Indians in its support. 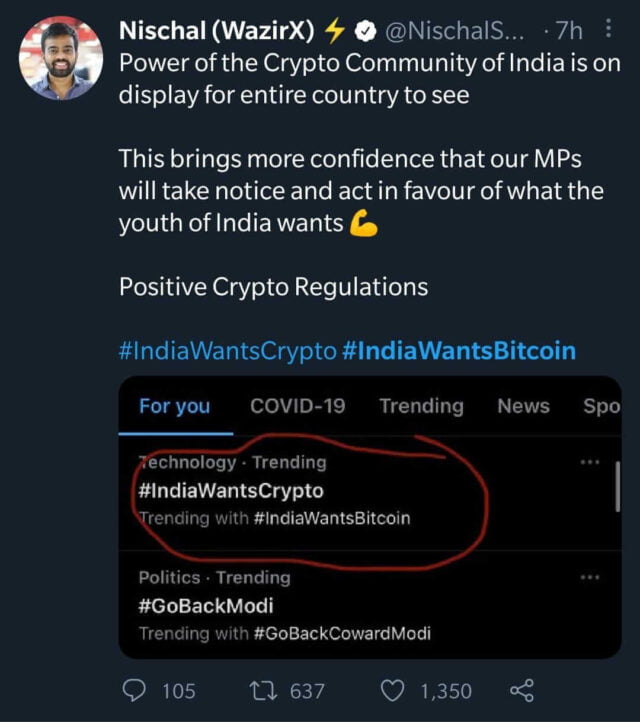 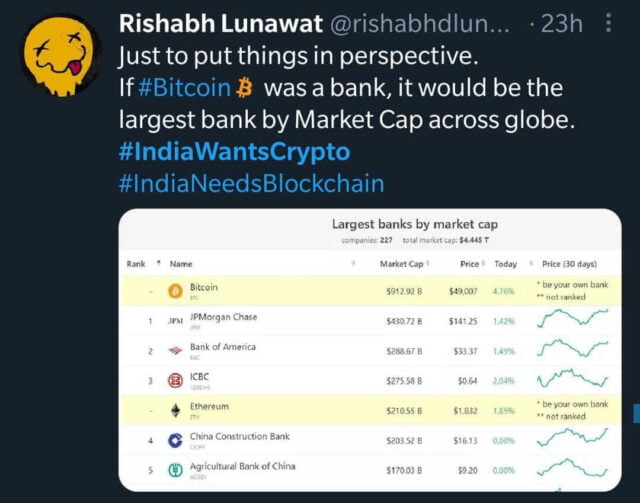 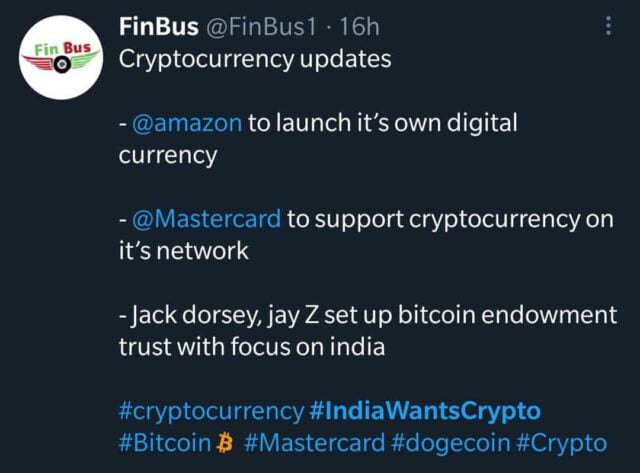 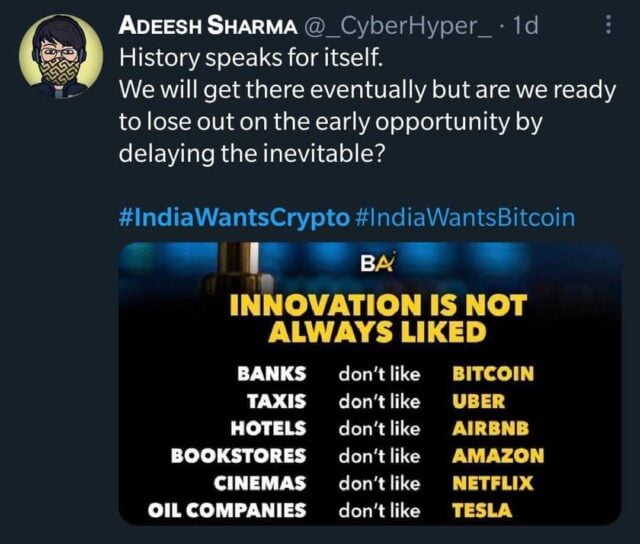 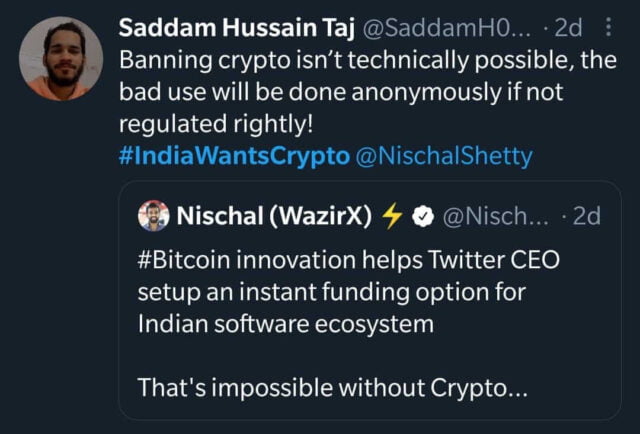 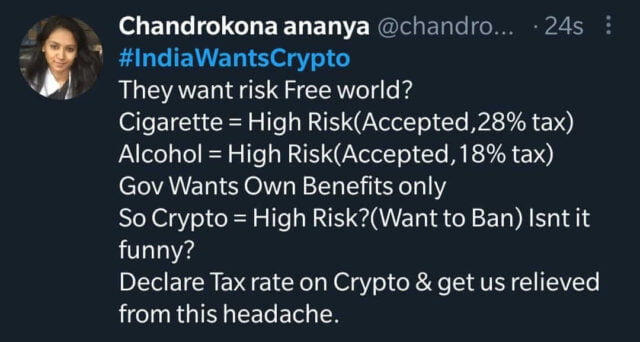 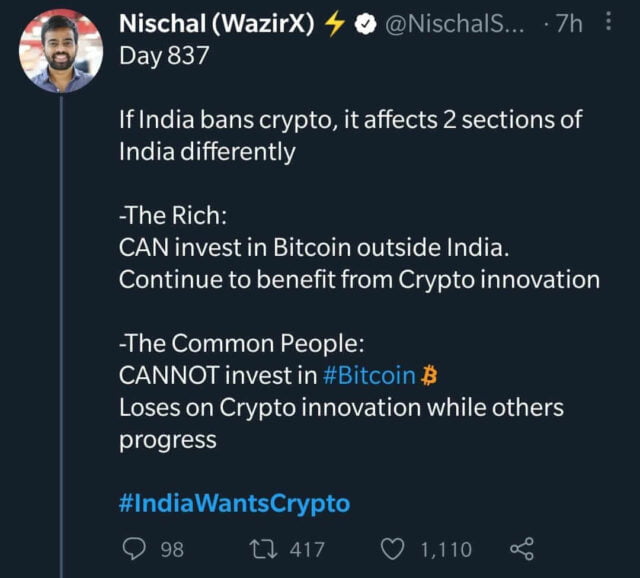 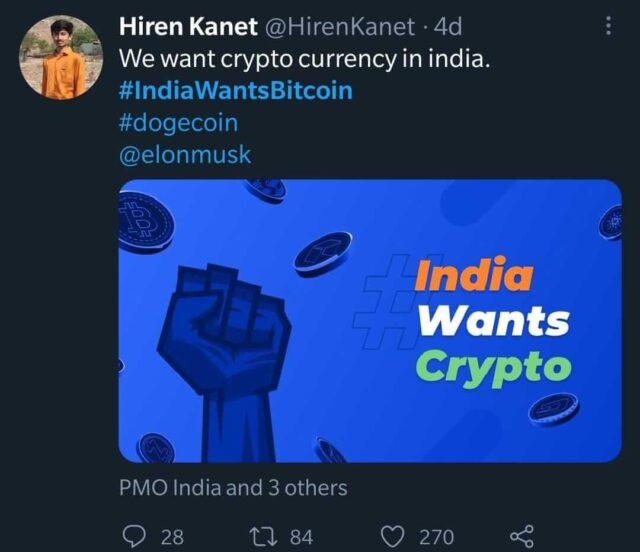 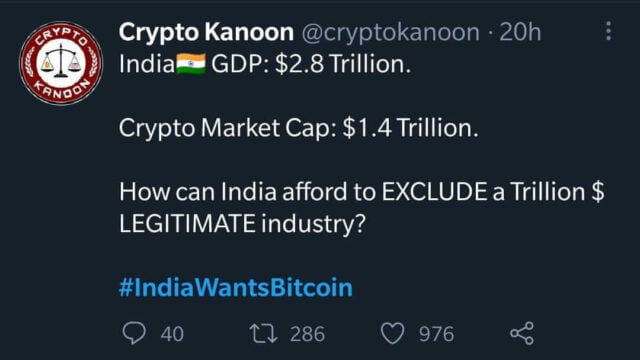 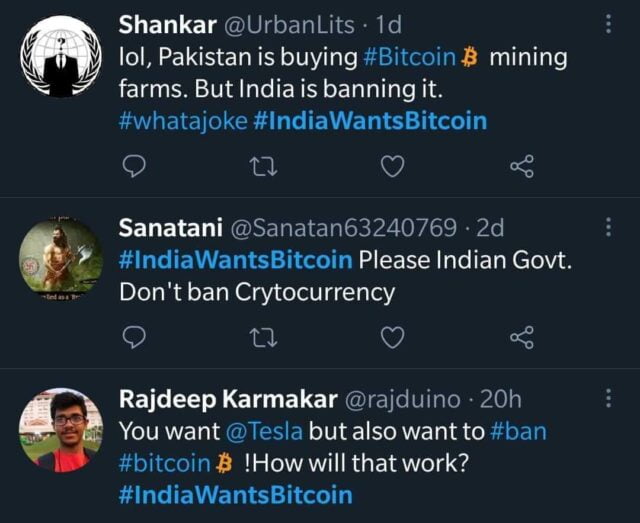 There are several concerns that arise if the government goes ahead with the ban. Cryptocurrencies will hold an important position in the future as most of the leading countries have accepted their use, India’s decision will only hold us back further when it comes to development and technology.

Banning instead of regulation will only leave space for illegal activities. The crypto firms in India, which were blooming will also face a huge setback and it also takes away the chance that Indians had in participating in virtual trading.

Bitcoin Crashed By 20% A Few Days Ago, What Happens If It Crashes Completely?