After much fanfare, Narendra Modi was once again sworn in as the Prime Minister of India for the second time yesterday on 30th May 2019.

The ceremony was heavily covered and many took a look at the new cabinet ministers, the absence of previous favourites like Sushma Swaraj and Arun Jaitely and more.

Yesterday, with PM Narendra Modi, 57 ministers were sworn-in for the cabinet of the government at Rashtrapati Bhavan.

Ram Nath Kovind, the current President, was officiating the oath taking ceremony, when two of the ministers fumbled during their oath.

Ministers Mansukh L Mandaviya and Faggan Singh Kulaste while taking the oath of office and of secrecy forgot to repeat the “I” and simply started their oath with their name.

The correct was order was, “I, Mansukh L Mandaviya…” but these 2 ministers did not say the “I” here, after which the President had to stop them and asked them to start the oath again correctly.

Not only them, but even G Krishan Reddy from Secunderabad forgot to complete his oath with the statement, “Vidhi ke anusaar, nyay karunga (Will do justice in accordance with the law).”

Instead he just ended his part with the phrase, “Bharat Mata Ki Jai”.

Dainik Jagran posted a video of the fumbles that were made by the two ministers. Although Faggan Singh Kulaste should have really paid attention when Mandaviya was being corrected for his mistake. Perhaps then he wouldn’t have repeated the error despite being the next person in line.

#2. Minister Came For The Ceremony On A Bicycle

Mansukh L Mandaviya, BJP’s MP from Gujarat is known to travel to the parliament on his bike. Earlier, he had held the position of Ministry of Road Transport and Highways, Ministry of Shipping and Ministry of Chemicals and Fertilizers in the previous Modi government.

He has been doing that for the last 5 years, and gave his reason for doing so as, “It is eco-friendly, it saves fuel and keeps you physically healthy.”

And now, this 47-year-old had pedaled his way to the Rashtrapati Bhaven to take his oath.

Read More: Which All International Leaders Were Invited For PM Modi’s Swearing-In Ceremony?

With the swearing in of Gajendra Singh Shekhawat at the ceremony yesterday, BJP has started work on the Jal Shakti Ministry that was promised by them. 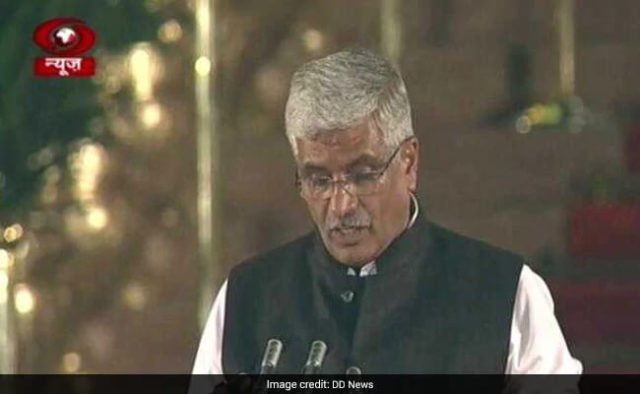 Within this new ministry, the earlier ministries of Water Resources and Drinking Water and Sanitation will be merged under one ministry.

Due to the fact that the water related duties were spread across 7-8 different central ministries, it resulted in a lot of delay in policy implementation, turf wars and more.

By making the Jal Shakti ministry, BJP is combining all these ministries with the purpose of providing safe drinking water for the citizens and irrigation water for farmers.

Pratap Chandra Sarangi went viral recently, after an image of him packing his bag for his trip to Delhi was posted online.

The 64 year-old minister won the Lok Sabha elections from Balasore constituency and was called to Delhi for his swearing in ceremony at the Rashtrapati Bhavan as he had gotten a spot in Narendra Modi’s Union council of ministers.

Given the title of Odisha’s Modi, he is often praised for his simple living and riding on a bicycle everywhere. He was also given a standing ovation and loud cheering when he took his oath.

Sarangi has been reported to help with building schools in tribal areas, and even using a big part of his MLA pension to support the education of poor children in his area.