Home Lifestyle This Man In Nashik Stands On A Bridge For 17 Hours To... 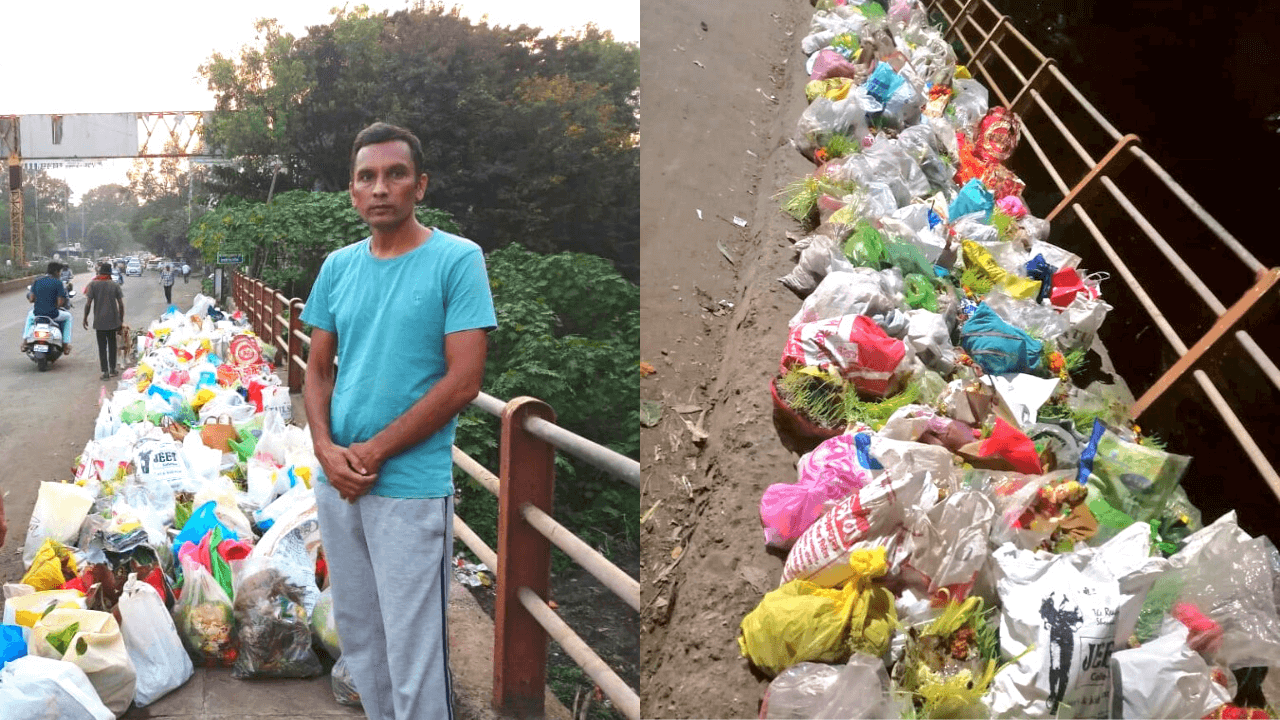 The festive season is marked by fun, food, and festivities but what usually is not paid attention to and is the greatest by-product of festivals is garbage.

Be it Ganesh Chaturthi, Eid, Dussehra, or Diwali; humans create tons of waste during the festivals. Usually, these are wastes like garlands, rotting fruits, cotton, or worse remains of crackers.

The production of garbage and pollution peaks after the festive season.

Not just the air quality but even the water bodies get polluted as they become the dumping ground for such waste.

This Man Protects The River Godavari On His Own

One man in Nashik recognized this trend and decided to make a change.

Chandra Kishore Patil from Indiranagar guards the Godavari river alone from morning to 11 in the night.

The world got to know about the good deed of Chandra Kishore after an IFS officer, Swetha Boddu, tweeted about him.

“I saw this man stand on this road the entire day with a whistle in hand to stop people from throwing Dussehra ‘holy waste’ in plastic bags into the Godavari, Nashik, (sic),” reads the tweet. 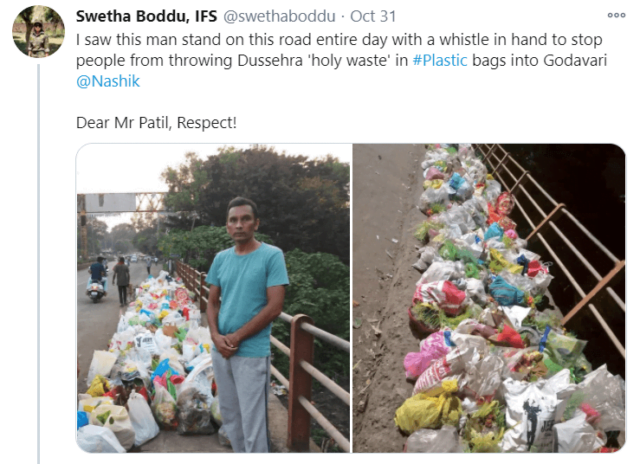 Also Read: Breakfast Babble: My Childhood Diwali Memories Were Made Of Bursting Crackers

In an interview with Hindustan Times, Patil said, “I’ve been doing this every year for five years now. And will continue doing this till my health permits.”

Patil lives in a society close to the bridge. He noticed the deteriorating condition of the river every year right after festivals, he then decided to take a stand five years ago and has been doing it ever since.

“I stand beside the river from morning till 11 pm at night with a whistle and alert people not to throw garbage in the river. Many behave rudely with me, but I still pursue them not to do such things,” said Patil.

He faces a lot of resistance and rudeness from people but despite that, he makes sure that they don’t throw garbage in the river and even makes them aware of the poor condition of the rivers.

When asked how he deals with the resistance, he said that he fills bottles with the river water and asks the people to take a sip from it. When they refuse, he makes them aware of the severe pollution in the river.

Patil told the interviewer that the accumulated waste then gets collected by the municipality and taken away to a separate dump yard.

The post was retweeted by many people. People called him a hero, and rightly so.

His noble act and dedication inspired many netizens and yet again drew attention towards the plastic pollution in rivers that people tend to forget conveniently.

After The COVID Vaccine, Will The World Go Back To How It Was In 2019?