Home Entertainment These Personal Experiences Show How Humble And Warm Irrfan Khan Was As... 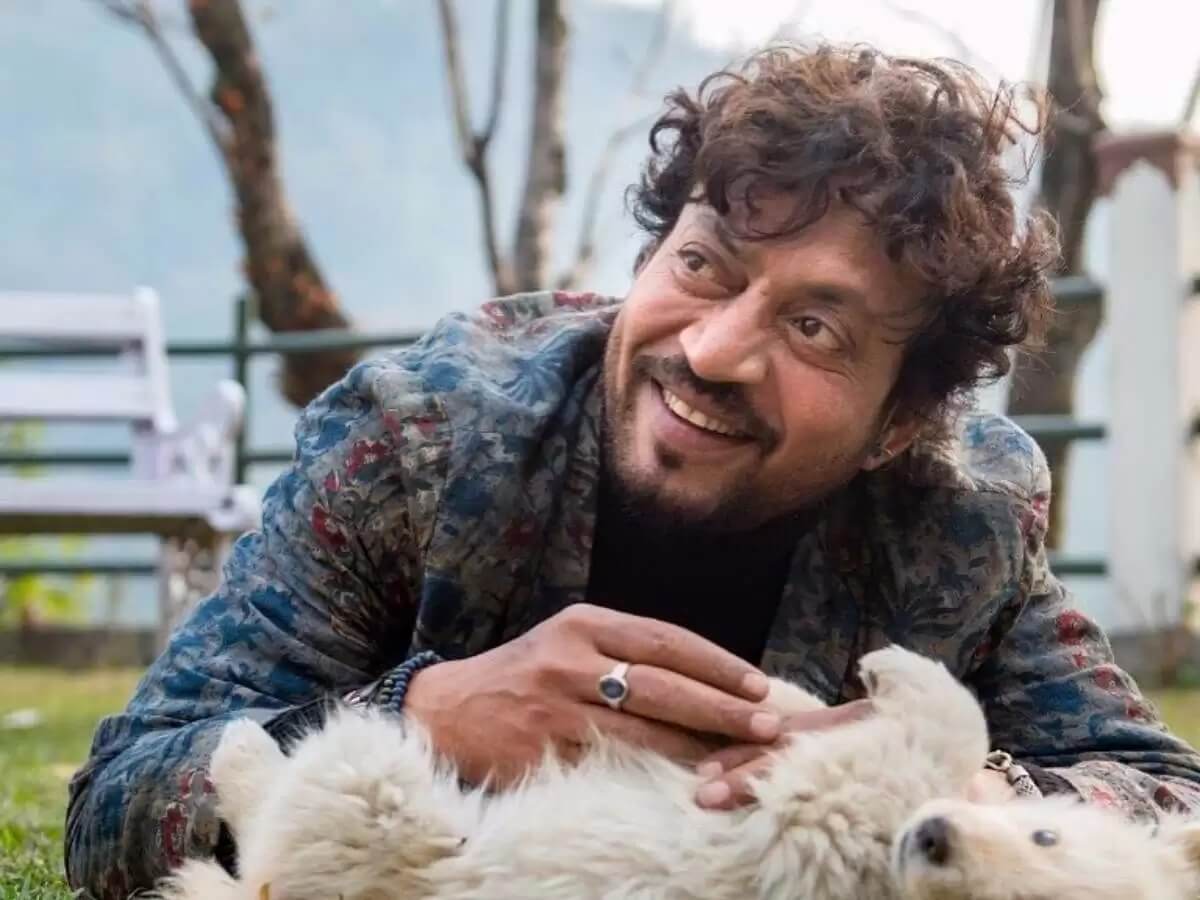 As if 2020 was not already crappy enough, the news of actor Irrfan Khan passing away today has officially entered it into the list of ‘worst year ever’.

Coronavirus, lockdown, social distancing and the other plethora of environmental, political and social issues apart, learning of the untimely death of such a legendary actor has been a personal blow to many.

Irrfan Khan, coming from a non-filmy background without the classical and socially accepted good looks that are so important in the entertainment industry, rose to fame based on simply his talent and hard work.

And what a rise it was, not only did his mere presence elevate even the most boring of Bollywood films, but his talent was also noticed and appreciated in Hollywood where he got to take prominent or leading roles in pretty big-budget movies like Life Of Pi, The Amazing Spider-Man, Jurassic World, The Jungle Book and more.

The news of him struggling with an illness had been known for quite some time now, his last released film Angrezi Medium had even been put on hold while he got his treatment abroad. So it was certainly a relief when we heard he was back to shooting having recovered properly and even released the film early last month.

In a time when we are struggling to find good actors who can actually act and not bring embarrassment to the Indian film industry, it is certainly a tragic day when the industry has lost a precious gem.

Not Just A Good Actor

Irrfan Khan was not just a good actor but overall liked for his low-profile and unproblematic image. Many people and industry insiders too have commented on how focused he used to be while also being a good friend to them.

This is apparent from the moving tribute that Homi Adajania, who directed Khan’s last movie Angrezi Medium, wrote on his Instagram account.

“We laughed about you dying… in fact we often abused your “uninvited guests” …. but I didn’t think I’d feel so fuckin broken when I heard what I was expecting to hear for a while now. I am eternally grateful for walking a few steps of your journey with you. I am eternally grateful that I could call myself your friend. I am eternally grateful for memories stuffed with so much joy, so much laughter in such little time. You once told me how you had an inexplicable love for your craft, but didn’t want the stardom anymore. Well, you never needed to be a star my friend, because you shone brighter than anything in the universe.”

Not just him, but I’ve found other anecdotes from other social media platforms like Quora and more that have revealed some heartwarming stories about the late actor.

One user of Quora, Shrey, recounted how he accidentally met him on his graduation day itself in Budapest:

“Irrfan Khan,Yes, I met him accidentally! :)

It was my graduation day. I attended it. Had snacks with some of my professors and friends outside the venue. Then we decided to go back. Instead of taking a bus or metro, we decided to walk- Me and my friend from Uganda!

We took a long long walk. We were discussing about our studies, future, and all.

Near the Deák Ferenc tér metro station, where there is a square and a park , we were going and suddenly someone passed by my side. I just looked at him by raising my head as he was tall and I couldn’t believe, it was him.

I ran as fast as I can and then started walking when I was near him. He was on the phone. As soon as he kept the phone, I reached out to him and the conversation is like following:

Me: Are you the same person ??

Me: Irrrrrrfan Khan .. (I was breathing heavily and butterflies in my stomach)

Me: Hi, I just wanted to tell you that I am living here, and I studied here and today was my graduation day. I just attended it. I just saw you. (Happiness on my face!!)

Me: (Quickly), Can I please get a photograph with you please ??

Irrfan Khan: No no, we are shooting here and I am in kinda hurry. so see you later and all the best.

He seemed to be in hurry and I just cannot behave like a mad fan, so I did not insist. Moreover, Irrfan Khan in real life seemed to be tall and strong and very serious. I did not imagine him to be like that ! :)

But I was so happy that I could meet him on the graduation day.

He was shooting for his film Inferno with Tom Hanks and was there during that time.”

A Rediff interviewer, Patcy N recalls all the times she interviewed him and feels as if her own family member has passed away in this moving piece. Here are some excerpts:

“My husband Anjum N was in the fourth stage of adrenal cancer when he met Irrfan Khan for an interview in 2003.

The interview happened twice as Anjum was writing for Rediff.com as well as for India Abroad, the Indian-American newspaper Rediff.com then owned.

Anjum passed away in August 2004 after battling the disease for a year.

Immediately after his death, I started working for Rediff.com.

In 2005, I met Irrfan for an interview about his film Chocolate.

I told Irrfan that he had passed away.

I was just 29, a widow, struggling to come to terms with the tragedy.

‘Oh! I am extremely sorry for your loss. Let me know how I can help you. If you need anything anytime, you can call me,’ Irrfan told me.

All through these 15 years that I have been a journalist, I have always thought of the actor who met my husband just twice before Anjum’s death and remembered to ask me, two years later, about the boy who worked at Rediff.com.

It’s not that actors are not insensitive. They know who they meet, and understand those they talk to.

But let me tell you what Anjum told me about his meeting with Irrfan.

They had met on the sets of a film during the lunch break.

Irrfan offered him lunch, and they ate as they chatted.

Because Anjum had shaved his head, the first thing Irrfan asked him was: ‘Is there a death in the family?’

‘Then why have you shaved your head?’

Anjum was secretive about his health at the time and would not give out the answer easily.

He did not probe and Anjum didn’t reveal more.

But Irrfan remembered to ask two years later. What a remarkable memory!”

A Twitter user has talked about how he was a distant relative of hers: 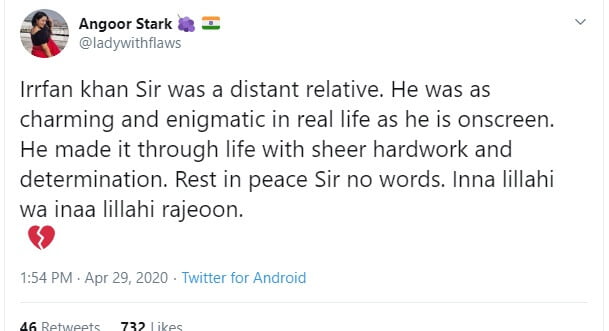 Actor Rohitash Gaud who featured in movies like A Wednesday, and shows Lapataganj and Bhabhi Ji Ghar Par Hai! recalled how Irrfan was a senior to him at the National School of Drama (NSD), Delhi.

In a live stream video from Facebook, he talked about his friendship with him and how he always knew that Irrfan would go on to become a great actor. Gaud also said that, “I decided to make him my guru, and asked him to give me tips. Like a supporting senior, he would always help us. I remember Irrfan bhai told us that as actors, we need to create an illusion with the character we are playing.”

He recounted how he met him at a party some time back and that “he was as loving as ever. I continued to ask him for his ‘guru mantra’, and he just smiled to say that he too is still looking for a guru, as learning is a continuous process. He told me, “Tum bhi lage raho, Rohit.”

Rohit also shared a sweet story when he and a few other friends moved to Mumbai in 1990 and met his late mother when they visited his house.

“We all moved to Mumbai in 1990, and once I visited his house in DN Nagar with another friend late at night. His mother had come visiting. While she was making us tea, she worriedly asked us why have we all come to the city, leaving our homes.

She said you all should take up regular jobs, and even get Irrfan one so that there’s a fixed income in the family. Irrfan bhai winked at us and told us, ‘Yeh maa hai. She cannot bear me facing any kind of difficulty.’ Little did Ammi know then that her son would become an international star.

He was very close to her and loved her a lot. She passed away recently, and maybe that somewhere broke him. Otherwise, he was a very strong man. And because of the lockdown, he couldn’t even visit Ammi for the last time. And now, even we cannot bid him farewell.”

While we certainly will always miss him, these stories do bring a smile to our face.