Unlike the more recognisable heritage sites of a city, the zero kilometre milestone, also known as the zero stone, point zero or zero marker, is an often overlooked part of a city’s history and culture.

If one was to spot the zero stone in Chennai, it is improbable that you would be able to conjure up a reason as to why it holds any significance. Usually, the zero kilometre milestones have a certain element of grandeur to them — especially in other parts of the world.

However, the one in Chennai merely stands on a footpath and is behind a railing, making it even harder to spot. So, what significance could this small figure hold? 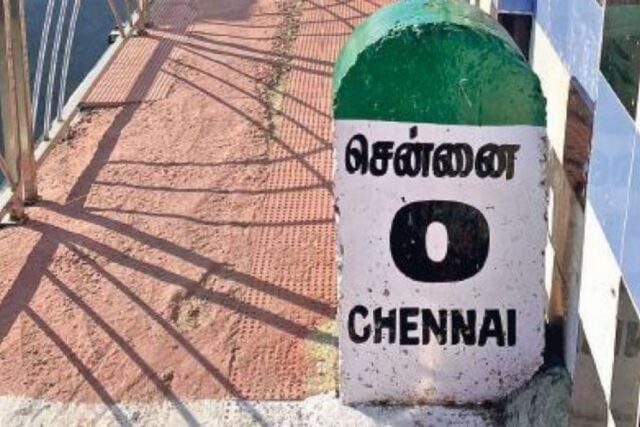 Significance Of The Milestone

The zero kilometre milestone is usually located in capital cities and is known to be the location from which specific distances to other places are measured. Drivers traditionally used these as the location where they marked their odometers at zero. They were usually designed as plaques, a sculpture or a milestone.

From around the world, the Golden Milestone in Ancient Rome is one of the earliest examples of milestone markers and was the point from where all distances in the Empire were measured. It was erected by Emperor Caesar Augustus near the Temple of Saturn in the 20th century.

Apart from this, there are other famous zero kilometre markers in cities like Madrid, Budapest, Havana, Berlin, Paris, London and Santiago.

In India, the most popular zero kilometre marker is the one in Nagpur. This milestone, carved with the distances of the four major cities from Nagpur, marked the geographical centre of the British Empire. There is no real proof, however, that this was erected by the British.

And although the borders were redrawn and the city no longer holds this position, it still stands tall today with its four horses and a sandstone pillar.

Lastly, the humble display of the zero kilometre marker in Chennai is one that is often overlooked. This is owing to its simple design and its almost undiscoverable location. Many have suggested that the milestone be given a plaque so that it could be a more celebrated heritage site in the city.

This kilometre milestone stands on the Muthuswamy road near Chennai’s Fort Railway Station, on the southwest side of Fort St. George.

It serves as a starting point of three major roads in Chennai — the NH 45, which leads south to Tiruchirapalli, the NH 4, which leads west to Bangalore and the NH 5 that goes along the coast till Kolkata.

Learning more about these zero kilometre markers only shows us that there is far more heritage left to be discovered in our cities that we may be overlooking.

What are some other heritage sites in India that are often overlooked? Let us know in the comments below!