Men in the entertainment industry have often made derogatory comments towards women whether it be objectifying them and focusing just on how beautiful they are or boasting about their exploits.

These comments are then usually met by laughter, brushing the whole thing off as a joke, such as what we say when Hardik Panya made those comments and Karan Johar’s reaction to it all.

(To see who all did call him out on it, read our piece on it here: These Are Those Who Called Out Hardik Pandya’s Sexist BS On KWK To Make Him Apologise; BCCI To Punish Him Nonetheless)

Something similar happened when yesteryear Tamil actor Saravanan who is currently a contestant in Bigg Boss Tamil season 3 made some insensitive comments during the show.

What Did He Say?

The whole incident started during an episode of Tamil version of reality show Bigg Boss, when host Kamal Haasan was talking about the problems of travelling in public transport.

Haasan commented on how with the overcrowding, people often get crushed or fall on each other in such buses, but also that some people can have malicious intents and use it to harass women.

Haasan said that, “nowadays it’s very different to travel by bus. Firstly there’s the crowd, probably it’s due to the rush to get to the office. But people fake advantage of this crush of people to molest women.”

Saravanan then raised his hand to which Haasan acknowledging him  added that, “when he sees these drunk people molesting women, Saravanan probably sets them straight.”

However, Saravanan then shook his head and while giggling said that,

“no no, when I was in college I used to do what they do.”

Basically admitting that during his college days he would use crowded buses as a means to grope and harass women on buses.

Haasan then exclaimed with an ‘ayio’ and said that, “well I guess now you have turned over a new leaf.”

The exact phrase used by Kamal Haasan here was punitham ayita which means got sanctified or became a better person.

Read More: 1.7 Million People Will Sign Up To Discover Aliens But Not To Clean Oceans?

The Silence Was As Expected

To be honest, although disturbing, the comments by the actor were not as shocking as the reaction from Haasan and the audience.

Where Haasan nervously laughed and brushed it off, even giving Saravanan a clean chit by saying he was a good person now, the audience were stupidly clapping and laughing at this whole exchange.

Chinmayi Sripaada, a South Indian singer instantly called out this bit from the episode when a clip was shared with her.

A Tamil channel aired a man proudly proclaiming he used the Public Bus Transport system to molest/grope women – to cheers from the audience.

And this is a joke. To the audience. To the women clapping. To the molester.

She also uploaded her own experience with being molested in a bus and how even boys have been victim to it. 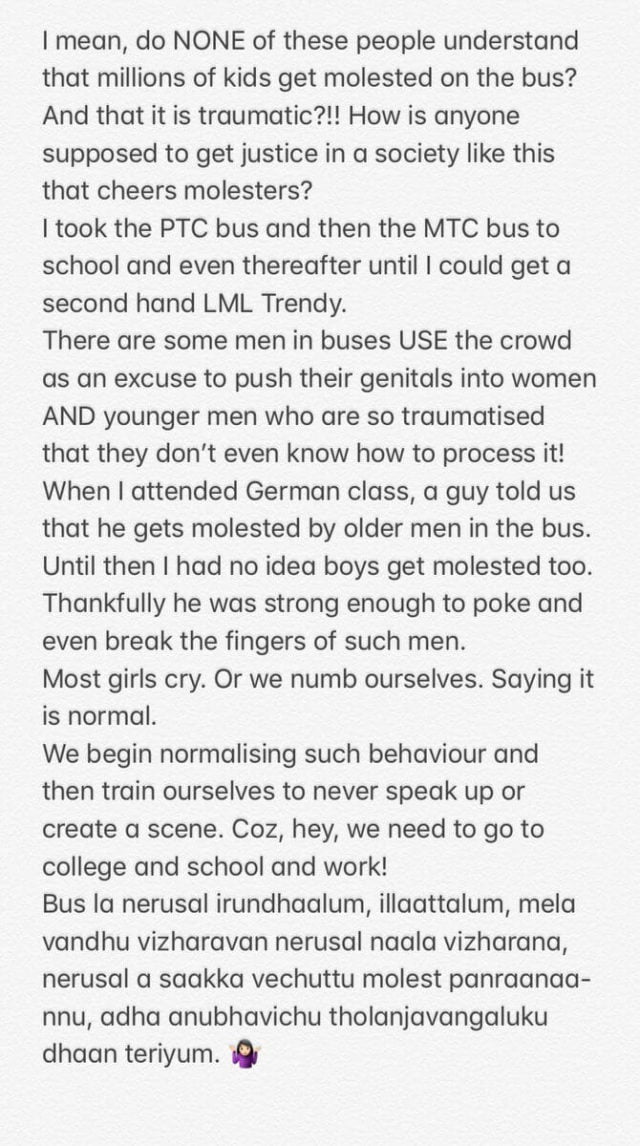 Chinmayi then posted a reply from an anonymous person who relayed her experience of getting molested in a bus and how it led to her self-harming. 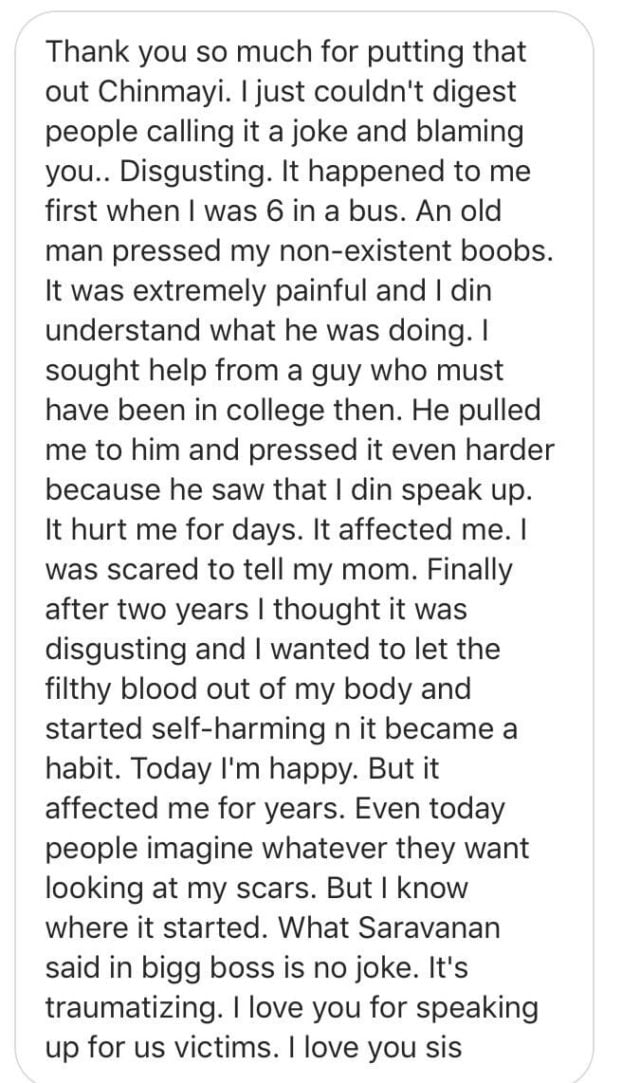 Saravanan, after the massive backlash has now issued an apology, saying,  “No one should commit the same mistake I did . If you do that there is punishment for sure. I raised my hand when Kamal (Haasan) sir asked the question only to reiterate that no one should do that.”

However, the question should rather be geared towards the audience, who were idiotically laughing and clapping during the segment and the way people are actually defending Saravanan’s action online.

And there are people online who are seriously saying that at least he didn’t rape someone and how it takes guts to admit that out loud.

One, is someone wrong only if they rape someone? And second, he didn’t admit it with remorse or himself said that he was ashamed of it and knew now that it was wrong.

In fact, the actor was giggling and laughing, taking it all as some big joke instead of the harassment it is.